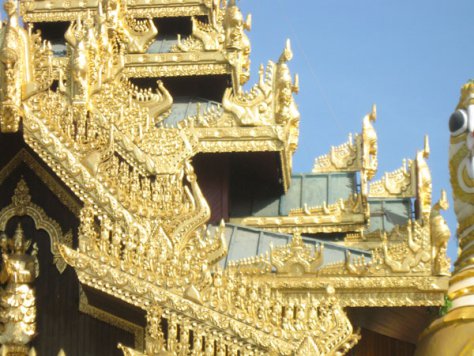 Early morning cool breeze gives little clue of the heat to come later in the day. Negotiate the ride to the EMDH office with the taxi driver, yesterday afternoon it was 2500 kyat ($2.5), which is the correct price I am told, I have to bargain him down from 3000. This morning the driver says 2000, I certainly don’t negotiate that price. A high percentage of the taxis are ancient relics, 25 year old Toyota Corollas and the like, invariably the inside of the cabs hardly looks better than what you would find in a junkyard, metal skeletons missing panels, door or window handles, springs in the seats, etc etc. almost all are left hand drive with the steering wheel on the wrong side, testimonials to their former Japanese lives.

Good news, my travel authorization has arrived, which means that I have official permission to go into the institutions in Mandalay. Took three weeks instead of two, but it came in in time, that’s all that counts. Off to negotiate a few taxi rides and get ready for the trip to Mandalay this afternoon. Shows and workshops start tomorrow morning.

A few hours later, I am waiting at the airport negotiating the two hour flight delay in the corner bar section of the waiting room demarked by fake bamboo trees laden with flashing white lights, strings of leds that would say christmas if they were red and greens of another country. The two hour stretches into three, and then three and a half. Finally the promising sound of distant propellers taxiing into landing position. At the four hour mark, a Burmese voice over the loudspeakers converts promise of possibility into reality.

Elements of surprise in Myanmar domestic air travel. There is security. We have to pass bags and bodies through the typical xray scanners. However there is no need to take laptops or liquids out of the bags, or change out of the pockets. Everyone stands on a wooden box to be patted down and wanded. The wand emits a symphony of sounds, the security officer, a woman, feels lots of goods in my cargo pockets, and then nods that I am indeed secure. No need to check just what is inside the bag either. The transfer bus to the aircraft is a brand spanking new German bus, unlike the one that greets us in Mandalay with weathered duct taped linoleum flooring.

Mandalay baggage terminal is all modern steel, glass and marble, and has three shiny stainless steel baggage carousels. Big mammoth ones that stretch a few hundred feet out in a very modern looking and completely empty terminal. There are luggage carts lined up for the passengers. Everyone waits patient by the carousel number one. The familiar red light and buzzing sounds start up, but the belt doesn’t start moving. A pause and repeat sequence, still nothing. Three minutes later, a phalanx of baggage personnel appear out a side door retrieving a small caravan of carts, that reappear loaded with luggage a few minutes later. One can’t help but smile.

After a 4 hour flight delay, finally find myself in Mandalay, ancient capital, and spread out town, peaceful and relaxed compared to the busy Yangon. Two shows and a workshop today. The Girl’s Vocational School in the morning, an institution for children. Some 70 girls live here, and they were quite happy to have a show. Lot’s of laughter and funny moments as Mr. YooWho negotiated the contents of his jacket pockets and suitcase. Playing in a large open hangar kind of building that had several large pigeons cooing from the rafters, and provided for a special dialogue, as Mr. YooWho kept glancing upwards wondering if the pigeons would be dropping anything down. A singing moment with the girls accompanied by ukulele was rather reserved from YooWho’s point of view but despite their shyness, it was a welcome change for the girls. Afterwards I offered a workshop to the headmistress, her assistant, the teachers and caregivers and three girls from the school. Quite fun working with simple mime and clown exercises, very shy at first, not very comfortable with the idea of expressing their humor-one would think that asking them to rub their hands together in a funny way wouldnt be so challenging, however it took a few minutes to get them into playing the game, and to express in a humorous way. Later on they were far more engaged as I lead them through series of exercises, accompanied by lots of laughter and play. I hope that they will share with the girls.

An afternoon show at the Buddhist Orphans Home for some 100 boys who had a great time as did Mr. YooWho in a large hall with the fans going. Trying to blow a bubble inside a bubble while standing on my suitcase was a new challenge which proved near impossible as the fans would blow the bubbles quickly away. Magically however, several large bubbles traveled a pathway towards the floor then back up towards me popping just as they were almost within reach. The boys really weren’t sure if I was controlling the bubble or not. I enjoyed the magic. Two shows and workshops the next two days, in more institutions, and then back to Yangon to do much more of the same there….