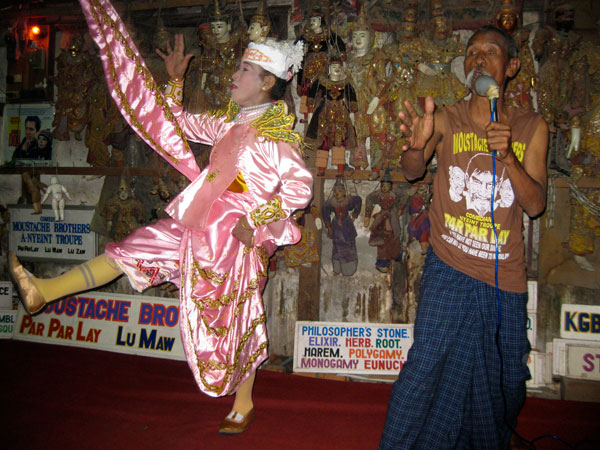 All day workshop for Activity facilitators plus caregivers, 12 in all. At the end of the workshop, one of the caregivers comes up to thank me (translated by one of the facilitators) for the day telling me that this will be very useful for her to work with the girls. After all that is my motivation for coming back to Myanmar, to take the training that I started last year a few steps further. I am grateful for her words.

The muscle I pulled in my back two days back is slowly returning to normal, still pulling and aching some, and like a good soldier I carry on cursing myself for having forgotten the arnica back home. I have been liberally dosing the tiger balm, and as I sit down in the cool of the Mandalay EMDH office I do my best to straighten my back as I sit down to type, and all kinds of little cracklings that I never knew existed release some of the tension.

Mandalay Show number 5 this morning in the Boys Training School, some 100 boys have a very good time as I play the goof a little more than usual as they seem extremely appreciative of YooWho’s goofy laugh. Afterwards workshop number 5 with twenty of the boys, the EMDH trainers and a few of the care givers. There are seven on the young EMDH staff working with me all weekend, and as we go they are understanding better and better the principles behind the training.Their miming skills are improving as well. The boys have an especially good time playing monster and get over their shyness at playing the ridiculous nature of it. I stand in the middle of the circle and ask them all to scare me at once. They are quite perplexed that I would be asking them to do this, and I note a few sideways glances to their caregivers who indeed encourage the activity, so they let loose their roars and it gets quite loud indeed.

As in the previous workshops, they are very hesitant to express themselves, and especially to act out their funny. Still by the end of the session there is a lot less inhibition. Six shows, and six workhops in three days in extreme heat is a rather ambitious goal, however I am going for it, and relieved that there is only one more to go this afternoon. Another training school, this one a private christian run one for boys, which means that it is not really an institution like the others.

Last night I made the pilgrimage to the Mustache Brothers show which unfortunately only tourists are allowed to go see. The brothers are famous dissidents, and have done prison time for their irreverance and mocking of the government. There is an informal agreement now that they can do their show in the front room of their house, as long as it is only for the foreigners. Otherwise they would undoubtedly be back in the cells. There are large photographs of them posing with Aung San Su Shi who is otherwise completely invisible, at least visually, in the rest of the country. It is forbidden to say her name and she is referred to as ‘the Lady’.

Yesterday shows (and workshops) at the Girls Training School for some 70 girls plus care givers and the afternoon at the YWCA for 100 plus kids in a rather small room.