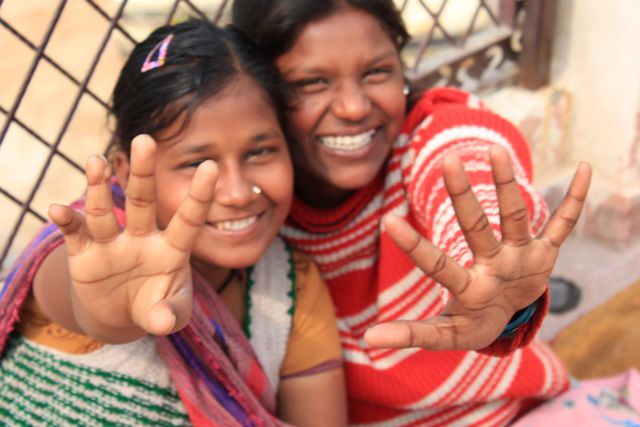 After joining Hilary and Audrey here in Delhi, we started our first shows for the Saalam Baalak Trust (the SBT). The SBT is one of the larger organizations addressing the needs of street children in India. With over 15 shelter homes, contact points and mobile schools round Delhi, boys and girls of all ages who have run away from home and lived on the streets, are given shelter, food, care and education. Whenever possible, the SBT also works to reunite the children with their families over the course of their time with SBT.

On our first day of shows we visited two boys’ homes in the Paharaganj part of Delhi. After getting off the metro meeting Samsing, we wiggled our way through the narrow streets of this part of Old Delhi. Past every walk of life, markets, and down a tight alleyway, every moment watching out not to run into a motorcycle, bicycle or auto. When we arrived at the first home, the 30+ boys were lined up sitting crosslegged in 5 straight rows taking part in a lesson. Quickly the lesson ended and Audrey and Hilary rushed to put on their makeup! The space to perform was small, but intimate. First show: filled with laughter, smiles and eager boys wanting to join into an imaginary tug of war with the performers. Part way through the show a group of tourists walked in, filling the room well beyond capacity. At first, this was a bit confusing and frustrating, but then it was explained to us this was one of the “Street Walks” led by a boy who grew up with the SBT and now takes groups around Old Delhi to see life on the streets, sharing information and his personal story of his childhood.

This same boy led us to our second show, another boys’ home. At this shelter, the boys spoke more English and they have been with the SBT for longer. Many of them were curious about the ipod stereo we had for music, our names, ages and where we were from. Each were eager to play, be silly and have fun, no matter their ages. At the end of the show a swarm of the younger boys crowded around the door to the room where we were. Each boy took a turn to look through the crack by the doorknob to peek at us, funny, but strange, people!

Our second day, we were joined by Tapasya Dasgupta, a young clown from Kolkota who were introduced to by Ashwath Bhatt, a performer here in Delhi. Tapasya joined the show, playing the violin and becoming third of the cast of characters. With a team of three women, we traveled to two girls’ shelters. The first was far out almost at the end of one metro line and then another 25 minutes by rickshaw. We performed on the rooftop, among laundry drying over the rails, overlooking the quiet neighborhood. While Audrey and Hilary got ready, I went to the rooftop to greet the girls. For the first 10 seconds upon seeing us, they were timid and unsure and then in a matter of 5 more seconds, we were smothered with hugs, handholding and requests for photos. Each giirl wanted on a photo on their own, then with a friend or two and then with one of us.

Several of the older girls were in the corner, upset by something before we even arrived. Two of them sat, one with injured legs bound with old cloth, sat on the side of part of the “stage”. Once the show started they sat and watched quietly, almost a part of the show. I watched them carefully and slowly their heads lifted, and eventually I caught a glimmer of a smile. At the end, they waved me over, I asked them their names in Hindi and they asked me mine, we sat and smiled and laughed together. The clowns had completely shifted their moods.