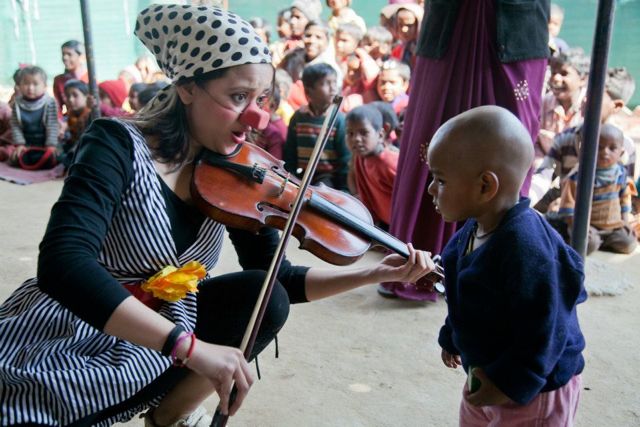 Gurgaon is truly the area of contradictions. As we drove down the main road, commercial development projects most still in the works, loomed over us. While in the US, construction sites, especially commercial construction sites, are seen as danger zones where hard hats and steel toed boots are a must, here they house temporary communities of the workers and their families. Here we began our partnership with Mobile Creches, an organization that provides day care centers to the children of these mobile and marginalized communities. In three days we visited six sites, each with their own host development project: automobile franchises, high-end high-rise apartments, a spa and a technology firm. It was hard to tell the difference between new construction and demolished buildings, only the billboard posted at the entrance with words “a better life awaits” and such gave away the future. After driving down sandy roads, we would arrive at site with one or many hollow high rise skeleton structures. Surrounding the buildings were makeshift one room homes, constructed out of scrap metal and tarps. At some of the sites up to 700 works live temporarily, some with their families, some miles away from home.

In three days we performed 6 shows at 6 different sites. Each site differed in the number of children and women, but all were equally baffling filled with contradictions and contrast just outside their walls.

At the first site, many of the children were quite young, some too young to sit through a performance so the space was divided into about four sections. 1. the children watching the show directly in front of the performers, 2. the very young babies and mothers eating lunch next to the makeshift stage, 3. the also quite young children, but some crawling freely around the bassinets – swaddles of cloth tied to table horses. 4. the crowd of men that came from the construction site to watch the performance. Oh, and there were maybe 10-15 men and women watching from various levels of the partially constructed high-rise behind the center. Part way through the performance, Tapasya brought out her violin, and instrument surely many if not most of these children had never seen before. As she began to play a child, just beginning to walk, stumbled across towards the “stage” crying looking for something, or needing someone. All of a sudden he noticed the violin and immediately was mesmerized by the new sound and sight! He stood there spellbound and Tapasya bent down on her knees to play a show just for him.