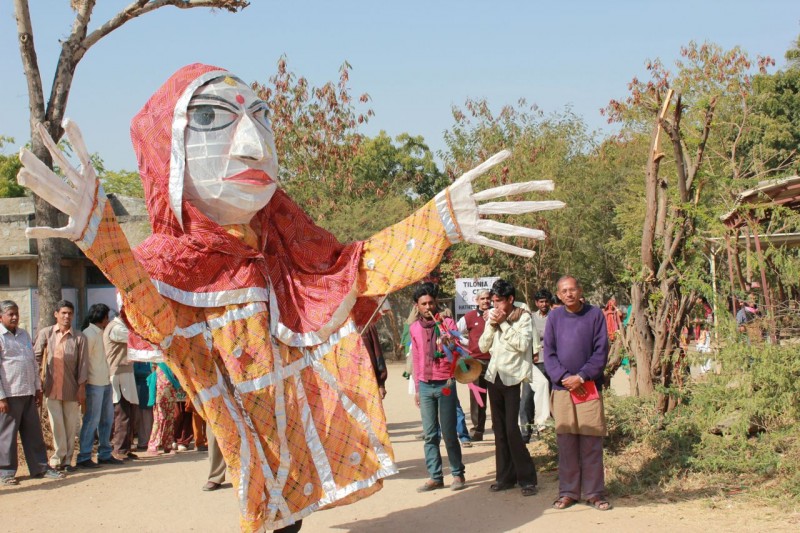 Today we drove to Barefoot College in the small town of Tilonia between Jaipur and Pushkar in Rajasthan.  With a focus on empowering women this is an amazing experiential training school, completely off the grid, serving over 70 villages in Rajasthan and many more through India. Upon arrival, we were surprised when we were greeted by a large Indian puppet, horns and dancing. We immediately all jumped out of the car and joined the welcome celebration.

After the incredible welcome, we made introductions and then were led through the campus to put our luggage down in our rooms. After settling in, we gathered in one of the classrooms to meet some of the educators. Vasu, who has lived at Barefoot College for 30 years, explained the history and translated each person’s introduction. He also shared a bit about himself. Many of the educators were long time staff and members of the communities around the college. They ranged from puppeteers to solar energy experts. In the afternoon, Audrey and Hilary performed for a rambunctious crowd of about 200 outside at the theater space. Many of the girls, who typically are working for their families during the day, were given time off to come watch the show. The show was quite fun and different considering we no longer have Kalyan, Ashwath and Tapasya with us. Hilary had some fun and ended up joking with one of the men in the audience, who as a result became a part of the show and dubbed her husband! The show was filled with energy and noise, as it was the first show of the project that had a microphone!

After our show, we enjoyed a short puppet show by several of the men of the college who travel internationally with the traditional puppets, and then we were joined by several young volunteers from India and the UK who helped Audrey and Hilary give a workshop for about 20 children. Through several imagination activities, non-language specific games the group became quite quite comfortable with each other and ultimately ended up performing in twos for the rest of the group!

In the early evening we were taken on a tour of both the campuses of Barefoot College. We were amazed by all the activities, everything from solar energy to health to toy making. At the first campus we visited the puppeteers rehearsing, a doctor, a medical laboratory, the dentist office and a workshop where women make sanitary napkins. We also saw the circuit lab for solar energy. On the second campus, where the college was originally based just 10 minutes up the road, we were given a short explanation by a woman about the new solar ovens constructed in 2011. Then we visited the textiles space, where we saw everything from the spinning of the cotton, the weaving, to the block printing and sewing. Finally we visited a toy maker, whose work was creative and resourceful and both for fun and educational purposes. 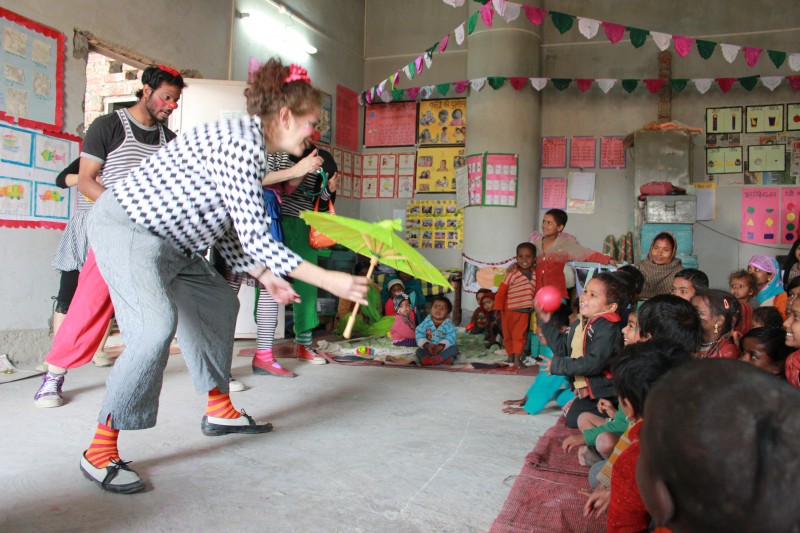 In the evening, we traveled about 30 minutes along a bumpy dirt road to a the remote village of Chir. Here Audrey and Hilary performed for about 30 night school children, mostly girls and a few boys who came from their homes to watch the show. This show was unique in both the timing (at night) and the space, a long narrow room with children lining the circumference, so it was a show in the round, rather in the rectangle!