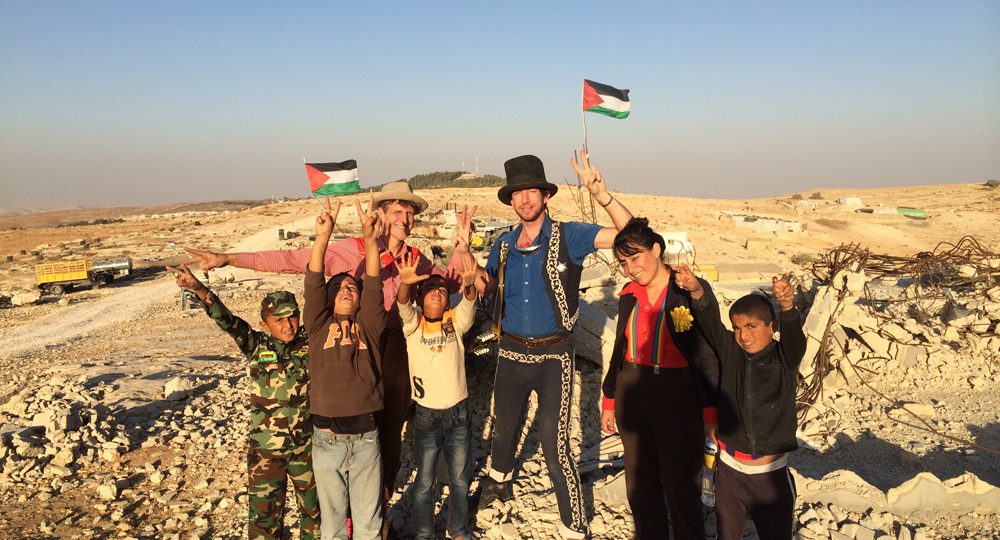 Wednesday. Clay Mazing joined us to play music and clown with us our last day. He had been working with Patch Adams in refugee camps in Jordan and had come a long way to join us one day only, three shows in three very different, but intense situations. In the morning we went back to Aroub camp and performed for a school of 500 loud boys.  Every time we got a volunteer it would disrupt the show momentarily as hundreds of boys screamed and surged forward, wanting to be in the show.  Then we zoomed back to At Tuwani to do a show at the protest.

So, as explained by the villagers– Every day 8 or so Tuba village children walk from Tuba to At-tuwani to go to school, only about 3 kilometers by foot path.  However that route goes between the Israeli settlement of Ma’on, and an outpost settlement.  An outpost is a settlement that is illegal even by Israeli law, all the Israeli settlements in the West Bank are illegal by International law.  Frontier settlements like Ma’on draw the extreme Zionists, many of them Americans, and the outposts are the real crazies.  Many times over the last 20 years Settler men from the outpost had run out with big sticks and rocks and beat the children or chased them.  So an international group had set up a house in At-Twani and everyday they walked with the children.  However they also were attacked by the Settlers and two were hospitalized with multiple broken bones and a stabbed lung.  So they got the Israeli army to accompany the 8 children on their walk between these two tiny desert villages.  We walked with the children, and the army, and the Italian volunteer observers on our first day.  Recently the army keeps arriving late and or not showing up at all.  When the army didn’t show up, the kids go the long way around, 12 kilometers, and run the entire way; they are scared.  The kids were missing a lot of class, so the school decided to hold a protest.  Up on the rocky hillside, 150 kids, teachers, and village folk, plus the theater troop, us clowns, a dozen or so International volunteers the Italians summoned, about 20 Israeli soldiers, a few Israeli police, and two journalists.  We performed and the Freedom Theater did playback theater.  Some of these kids had already seen our show twice so we tried to do some new stuff for them.  The overall theater of the protest didn’t make sense to me, the soldiers filming the people, the people filming the soldiers, the police occasionally yelling stuff, but that night the villagers said the protest was a success, they had delivered their message strongly, the army had to do their job.

That same afternoon we headed up to Amafogara Village, a tiny hilltop village similar to Tuba.  They suggested we perform in the cave, ceiling about 5 1/2 feet tall, but instead we performed on a concrete platform next to the bulldozed mosque, with a view of the Negev desert behind us.  I fell off the platform 4 feet onto the rocks, improvising to entertain the kids.  Afterwards two village girls sang songs for us.  Some of us walked over the hill back to At-tuwani but I drove the long way around.  We watched the last Freedom Theater show, ate our last communal dinner, and then us clowns drove back that night to Jerusalem.

Jerusalem was culture shock, back in modern industrial rich society, we arrived exhausted. The next morning Leah and I rushed a quick tourist visit to the Wailing Wall in the old city (we’re both Jewish), and then an afternoon flight out.  Tel Aviv-Paris-New York-Seattle-Portland for me.

What a trip, what an experience.  Thank You Sayda for organizing the trip so well, Leah for being even more hilarious off-stage, Fidaa Ataya for being our guide, host, and radiating bright optimistic light everyday, the Jenin Freedom Theater for doing what you do, and to our Clowns Without Border donors who make these trips possible.