Yesterday we had two raucous performances in Cite Soleil, a slum roughly 9 square miles, at the wharf of Port au Prince. Until a couple of years ago, the UN would not even go into this area controlled by various gangs and block lords. Cite is now rated as an ‘orange zone’ a step up from ‘red zone’ status, the worst possible status.

Today, we went into a ‘red zone’ called Martissant. Again we partnered with AVSI, an Italian NGO aimed at improving the psychosocial well being of children in slums by advocating against child trafficking, child slavery and for play and letting a child be a child. Martissant holds over 100,000 people living in its crowded perimeters. Gang leaders run the various parts of town and have recently killed the acting police chief for the area to remind all who are in charge.

When we got into the region we saw children playing all around the streets. In their hands were no toys, but water jugs. Each child had a water jug proportionate to his/her size and it was clear that these children own the responsibility of providing water for themselves and their families. A trek to the public wells is no simple task. We hardly encountered any level ground in all of Martissant—the community is nothing but steep hills dropping to sea level.

The AVSI volunteers dropped us off near one of the public wells and their child friendly playing space. This is a small building with three rooms. One is the size of a two-car garage and is used for arts, crafts, performance and play by the children. Another room is a small office for a child psychologist and another room is a tiny administrative office. This place is open to children at any time and there they are encouraged to play, create and be children.

We met about 50 children at this office and were pointed up to where the show would be. Imagine Lombard Street in San Francisco, but straight up. Bucket drum around my shoulders, Sarah with her trombone and Suzanne on child/bubble patrol, we embarked upwards. We created a parade and played music for 30 minutes as we climbed through the streets, up alleyways through narrow corridors that opened up to a busy truck route. We marched like the Pied Piper drawing children from rooftops and hidden corridors. Along the way we passed families who came out to see the commotion and began to dance. It was about 105 F, we were gushing with sweat. By the time we reached the pinnacle, a UN barracks with a basketball court run by members of the Sri Lanka military; we had a crowd of almost 200 anxiously anticipating a show.

At the top of the climb there was precious little space to get away from the children while we prepared for the show, so we did our best and gently asked the kids to wait 5 minutes over at the UN’s basketball court and we would soon arrive. This idea failed, so we prepared our show with kids gazing on and then led a chaotic procession to the center of the basketball court. My arms were shaking during the first acro bit, perhaps from fatigue from the march or maybe just excitement. We had a great show; the kids loved it, but truly felt like we were running on fumes. 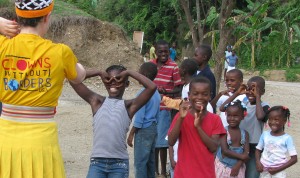 Fortunately for us, there was a drivable road back down to the site where we began and so we had a little break in our car driving down the steep slopes of Martissant. On our way we came upon a broken down truck blocking the one lane dirt road. An impromptu bubble show followed as Sarah and I played with a local family who looked at us as if we were crazy blans. I guess we might be.

Lunch and then prep for our second show. We drove about 3 minutes to a market and were dropped off. Another hike ensued and this time up a ravine formed by sewage and run off. Dodging goats, pigs, children and human waste, we paraded our way up the slippery slope to a dirt quarry in which we had a mud-caked clown extravaganza. Another 200 people showed up, some standing 20 feet above us looking down and laughing. All ages were here looking on.

Despite falling from a rock wall and nearly clocking our camera person with a chunk of stone, I think the show went really well. We finished and Sarah and I decided we had to parade back, no questions, no options—the show needed it. We began our dirt stained, sweat soaked march down the sludge and sewage road. This time we had children clinging onto our costumes, some pulling some pushing.

At one point on the march I looked to my left down a small corridor between two concrete shacks. It was barely the width of two people standing shoulder to shoulder; in it stood a small child, perhaps three years old. He had sunken eyes and a distended belly. His only clothing was what looked like rags tied up with a piece of string. As we passed, he and I made eye contact and I stopped for a minute to play a little beat for him. At first he took a step toward the parade and me as if to join all of the other children playing in the street, but then he hesitated. In the same manner, it looked as if he started to smile but again withdrew his attempt. It was like an invisible force was preventing this child from coming out of the shadows to play with us. For some reason he felt he was not able to be a part of the fun.

The parade had begun to push me forward and I had to move, but for the rest of the procession I was haunted by the image of this malnourished boy. 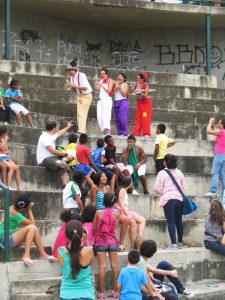 We try our best to bring shows to remote and urban areas in efforts to reach as many children and their families as possible. This boy in the corridor was a reminder to me though that there are still so many children in the shadows who also deserve to play, to be children. But for whatever reason, be it poverty, be it child slavery or abuse, be it sickness, be it gang warfare, they cannot come out and play.

This hot and dirty day was the most exhausting of the trip yet and by far the most fun. The memory of this child is fuel to encourage me and my fellow clowns to continue our work and strive to allow children be children.