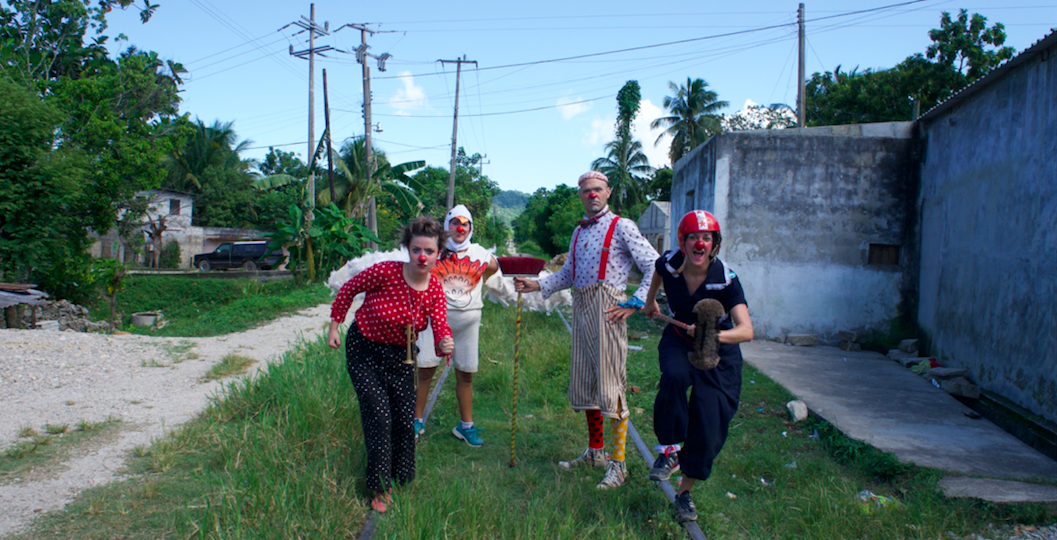 Derrick Gilday joins CWB – USA on tour in Mexico, as the clowns travel north along the migrant caravan route. He writes about the overlapping feelings of fear and love that accompany performing in such a desperate situation.

It’s quite difficult to describe what I’m experiencing. I’ve never before embedded this deeply within the migrant experience, and always relied on the news and personal stories to understand what’s going on.

This tour was not planned to coincide with the Honduran Caravan that is now many thousands of people strong. A large percentage of the caravan consists of families, which is not typical for Central American migration. They just so happen to be crossing the border a few days after we arrive in Mexico. The logistics of the CWB tour were in place, and we had planned to travel north along the migrant route, but we did not know—no one did—that there would be such a crisis and influx of people while we’re here.

The Clowns Without Borders tour makes stops in Tenosique, Palenque, and Salto Rio over the course of four days, while working in partnership with Palhaços Sem Fronteiras Brasil, Circología, Llaven NÜ  and PRAMI. We watch the news in a restaurant, between rehearsals. I’m alarmed to see what’s happening, and quickly assess the energy of the team as well as local Mexicans in the restaurant. Everyone seems pretty shocked, and it remains a front-page story the following week.

I had a small amount of trepidation leading up to this trip, and now it has dialed up significantly. I’m questioning what the hell I’m doing here. I knew I was coming here for a reason, but now, all of a sudden, I’m questioning the universe and wondering if this will be my farewell performance. Even though I know the migrants are fleeing violence in their own countries and looking for ways to elevate their families out of poverty, it’s frightening to think about huge crowds of people.

We finish our fourth show of the day, and ten minutes later we hear the train whistle blowing outside of the migrant house/shelter where we just performed. Large numbers of migrants use the trains to travel north, hopping on and off to stop at migrant houses along the way.

Half the audience grabs their bags and starts running for the train, which passes 5o feet from where we are. We rush out to see it for ourselves—what is it like to risk your life, jumping onto a moving train? We’re mesmerized by the risk and energy it requires. Each year, many people are seriously injured, mutilated, or killed doing exactly what we’re witnessing. We stand three feet from people who strategize, scatter, and plan their leap of faith. There’s a man with his five-year-old daughter, and he has to delicately pass her off to another man on the train so he can jump on, a few cars down.

I see that he’s going to attempt this, as does everyone else in the group, and people are terrified. I will never forget the look in his eyes, or his daughter’s, as the wonderful man on board safely wraps his arms around her as the train sweeps by. The little girl is calm the whole time, and the strength I see on her face is more than inspiring. It’s godly. 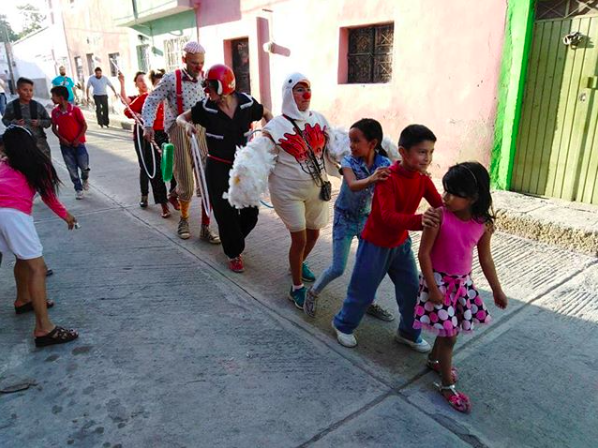 Later, as we leave a swimming hole and drive home, we see the train again! We drive parallel to it, until our car and the first train car stop at the same railroad crossing. It’s such perfect timing that we’re overwhelmed with excitement and joy. We see many people who we performed for over the past few days. We all jump out of the van and share waves, smiles, well wishes and recollections of time shared together. It’s a beautiful moment, in which we see the tough faces, which migrants wear to protect themselves while traveling, turn into beautiful wide smiles filled with joy and love.

Suddenly, different people yell from the train, “Agua, tienes aqua?!” We can see that they’re thirsty and we begin searching the van for bottled water to throw to them, but we only have one. At this exact moment, when about half the train has passed, it jolts to a stop. The sound of clanking steel and squealing brakes is followed by a wave of about 20 people rushing toward us. It all happens within a matter of five seconds. We barely have time to think!

The warm, happy moment we’re experiencing turns into a “how do we protect ourselves and how will we make it out of here” moment, really quickly. As we’re surrounded by frantic people, we collectively explain that we only have one bottle. The migrants stop in their tracks, accept the water thankfully, and smile.

They act desperate because it’s a moment of scarcity. Many people jump off the train, mobilizing to find more water. People yell cues from the train to people on the ground, who are rushing into a tiny shack of a store, right next to the railroad crossing. Everything is moving so quickly, and it makes the stillness of the train even more ominous. Everyone is listening to the train, to hear when it begins to move. We realize we have some empty bottles in the van, and our uncertain stillness transforms to meet the energy of the situation. We all jump out of the van, feverishly searching our bags and the floor for empty bottles, which we hand off to people on the train.

One guy on top looks down at us clowns and says “Gallina!” He recognizes Darina’s character from our show. At this point, we’re seeing so many familiar faces from our tour that emotions well up and the wild energy of the experience is felt on all sides. We’re running up and giving hugs to friends, reminding each other of the love humans have for each other. We see people from all three locations where we performed, and share blessings, smiles and memories as if we’ve known each other for years. The energy is incredibly intense, beautiful and life-changing. A few Hondurans even throw three Honduran dollars down to us as a way of telling us thanks, releasing the past, and giving us a tangible memory to hold onto.

It’s very interesting to travel through Mexico as locals feel this wave of migration. Mexico is not only a place of transit, it’s also a place of return. In reality, most of the migrants will probably stay here. The few Mexican residents I speak with, outside of the groups I’m working with, say they would be happy to accept the Central American migrants to Mexico, and hope that many of them stay instead of continuing to travel north.

These Central Americans migrants want to go to the U.S. to raise their families out of poverty. They face an enormous amount of violence and crime in their home countries, as well as on their arduous route north. Many of us would take the same risks. I know that the U.S. cannot accept everyone that wants to cross the border for a better life, but it’s important to remain compassionate toward our fellow brothers and sisters, and support them as they try to escape a life of fear.