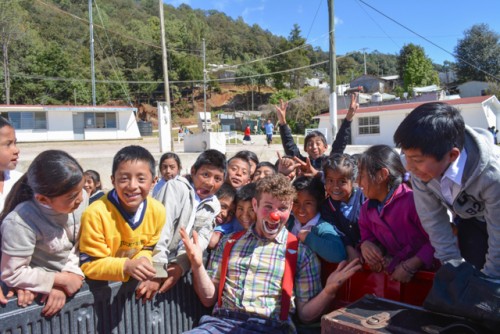 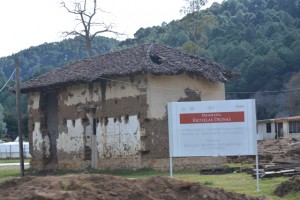 Thursday we drove up towards the North West of town and went off the road onto a dirt path. We were on our way to an indigenous school at the end of Peje De Oro on the outskirts of San Cristobal. The land we were on is currently being occupied by indigenous people who took over the land and created their own community. The land was once owned by a wealthy landowner, who has long past gone now. Attached are pictures of an old depilated house/mansion left to ruin and crumble as a symbol. These communities are not Zapatista communities but embrace their ideals by banning alcohol and drugs resulting in a conflict and violence free community. 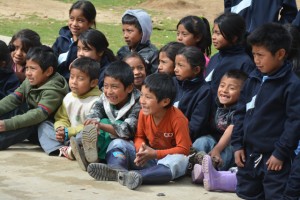 This school was the furthest we have been out of the city and you could tell that the government didn’t fund this school . It was built just like the houses around it. Built of cinderblocks and concrete or wooden shacks and a tin roofs with little to no cover from the elements outside. You can see a huge difference in the quality of government funded schools in the city and the Indigenous schools in the valleys and mountains outside of town. 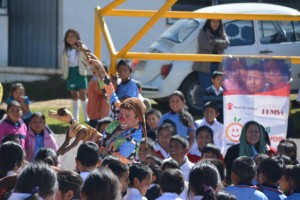 In this particular school we were asked to use their packed storage room as a dressing room, we could barely fit in the room with all of our props. I was able to peak into the classroom next door and see text books scattered around the floor and shelves, old school chairs from times past, and a bunch of kids learning what they could. I noticed they were just now putting up a map of Mexico in the back of the classroom, just then they noticed me: a westerner, waring clown makeup, a camera, and a clown nose. They screamed! PAYASO! some were scared and ran away, one young man slowly gestured his finger across his neck, and others made silly faces and laughed. 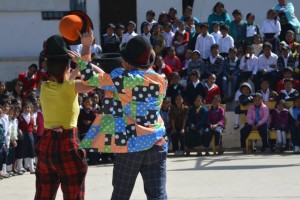 The show was a hit! the kids who were once scared of us now gave us hugs and were curious about our props and colorful clothes as we packed into the storeroom to decompress after the show they would not let us though. Once inside I peaked out the door one of the kids pinched my clown nose off and put it on his face. I grabbed my camera to take a picture. this kid followed me back and forth to the car as we loaded our props. He kept smiling and waving goodbye as we drove off. I couldn’t help but feel full of life the gift we are able to give these kids. 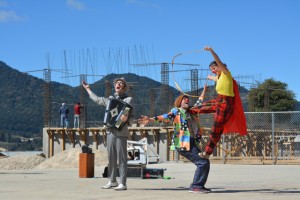 I noticed the main teacher at the school had a Furry wool skirt and some of the men wore guerrilla wool furry coats and I learned they are the largest ethnic group in Chiapas. They are called the Tzotzil, who number about 200,000 people, living in scattered hamlets in the mountains. Although the Tzotzils are financially poor, many aspects of their society and culture are worthy of our attention. One of these aspects is the unique way in which the women in the villages care for their sheep, and their philosophy about these animals and their woolen souls. 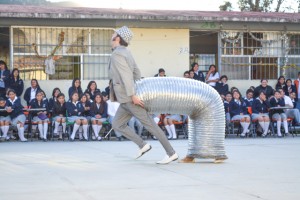 We had the weekend to ourselves to explore. Our original plan before Morgan got sick was to drive 5 hours to Palenque a Maya City state in southern Mexico that flourished in the 7th century. The Palenque ruins date back to 226 BC to around 799 AD and gather thousands of tourists a year but the Zapatistas created a road block hindering any passage though the town. We learned this from two girls who were on their way to on a tour bus to Palenque when they were turned around after 4 hours into their trip, when they encountered a road block and a gunfight between the zapatistas and the Policia. Guess we dodged that bullet. 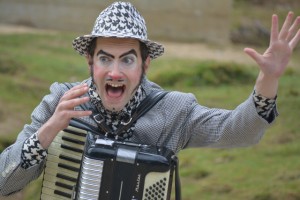 We played in front of a wine and tapas bar for about an hour. Kids were enamored by my wooden dog marionette and Jasper portrayed the MC as he does in our show and played his accordion while I juggled and danced with my marionette.

When the Policia tried to shut us down they were telling us we need a permit and to move on. Just then locals came to our assistance and stated that what they saw was magic for them and the kids and we should be allowed to stay. More people who didn’t even see out show saw what was happening and came to our aid. The Policia was outnumbered with disgruntled locals and stated we could stay as long as we don’t stay in one spot for to long, that we have to move down the street allowing other performers and vendors to use the spot. Only in a town of radical uprising can you see locals standing up for street performers, good on you San Cristobal, you’ve got a fan for life. #buskingisnotacrime 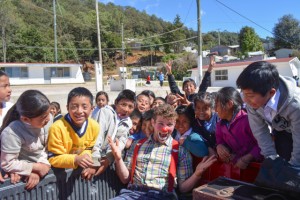 On monday we traveled to the mountain town behind San Rafael and San Juan Del Bosque on the north west side of town. The houses were similar to the ones in Peje De Oro but they were lining the side of the mountin instead of being in a valley. It seemed there was a little more structure on this side of town, but not as much as in the city. They were constructing a new school to replace the outdated shacks they were using as a school. Children lined the hill and climbed up top the basket ball hoop to get a better view of the show. We were surrounded by over 500 kids and felt a little rusty after our weekend off. The kids didn’t mind as we inched our way though the crowd to make it to the stage. 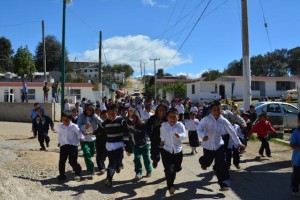 We got some fantastic photos of that show. One of Morgan gracefully floating though the air with her ribbon dancer with tons of kids lining the basketball court, walls, and hills. Another of Jasper leading the procession with his accordion and you can almost hear his Mexican soap opera accent though the photo, and tears of joy when my Dog marionette came to greet the masses of kids. My favorite photo is when I was in the back of the truck leaving the school and the kids swarmed all around the truck holding on and risking their life to jump in the back with me, By the time I got them all off we started to drive off and about 40 kids chased the truck waving good bye as I snapped pictures. It was surreal to see the impact we had on these children, truly magical.