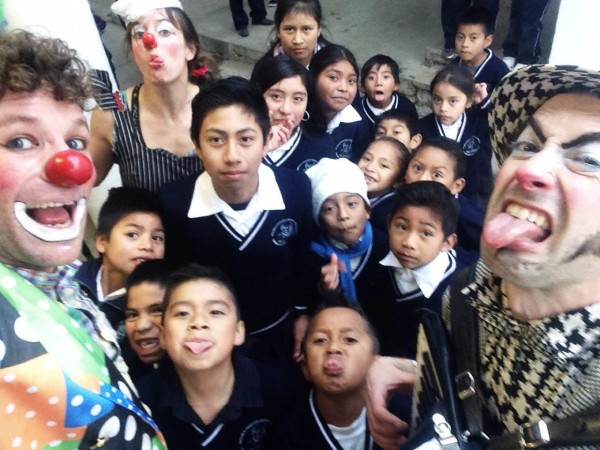 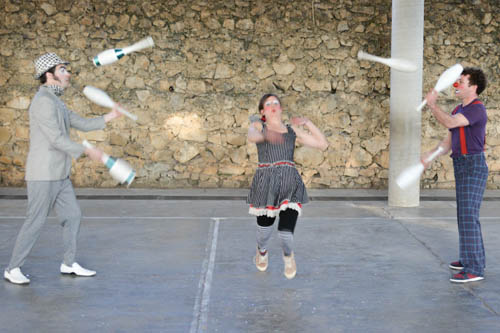 Traveling from the Airport in Tuxtula to San Cristobal was a great introduction to Chipas. You really get the “Hey! I’m in a 3rd world country” kinda feel, but it was not until spending 2 days and 3 nights to really grow and appreciation for the city. A community banded together to oppose the government’s movement to up root the indigenous people who live here. Even 20 years the children are effected here.

We had 2 days and less then 10 hours to develop a show under the guidance of Rudi, a unique director with an eye helping us sync, breath, flow, and play together interweaving our acts together placing us completely out of our comfort zones and creating a unique show we would have never thought of in the first place.

Jasper the leader of the bunch is an energetic powerful MC and strong lead, his voice is powerful thanks to the howling bellows of his Accordion and mishap magic and helps the group though the show as our confident leader.

Morgan with her radiant contagious charm fills the room with laughter when she walks in, she plays the pinky prankster and evolves into to an amazing object manipulator twirling, spinning, and swirling everything from brooms, hats, clubs, and herself all around the stage and into your heart, her light bring a definite completion to the trio.

I bring my technical skills of hat juggling, plate spinning, and manipulation of my marionette puppet dog Bonkers to the mix of these fellow energetic driven and passionate performers, we feel like the Three Amigos when we are together on and off stage. 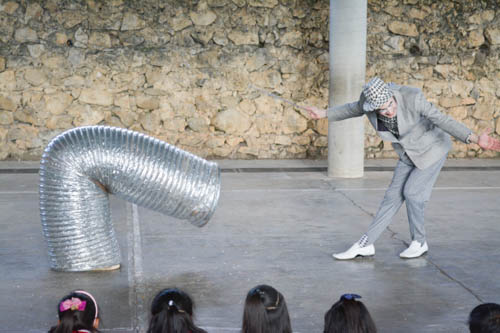 We performed for over 1200 kids in San Cristobal two days so far and just as we expected, they were amazing! The first show had over 500 kids sitting in a half circle in a basketball court. They were eager for the show to begin as we approached you can hear the accordion sing in the distance, everyone turned around. They acted as they already knew who we were and they started to smile and from every corner we hear them saying “Hola Payasos!” and immediately treated us like old friends.

Each show have had their difficulties, surprisingly, the lack of being able to speak the language fluently has not been the only problem but the biggest difficulty has been finding out what kind of entertainment thrills these children. Adapting our solo material and creating new duets and trios have been the most challenging and the most fun. After each show we try and tweak the most minuet details to try and get a reaction out of our bits. Take in mind, most of them don’t own a television or they never exposed to quality live entertainment.

Every elementary school has been different.  Some kids have been misplaced and forced to move into packed communities and others are at risk youth who come from working 8-10 hr work days and then attending school in the evening. As we were walking home the other night at 11pm we saw a group of ten kids from the ages of 5-9 walking home with empty baskets that earlier in the day as earlier as 8am were filled over the brim with everything you can think of like hand made trinkets, cigarettes, and junk food. Some of these baskets are are bigger then them. today I learned 4 out of 25 kids finish only a primary school education here in San Cristobal.

Regardless what background these kids come from the response has been the same, They are so grateful for this gift of laughter we give them. Today we performed in a small school on the outskirts of town in a community of misplaced Zapatista and Indigenous families. 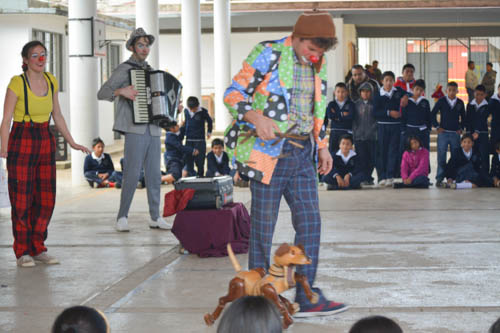 In Sor Juana Ines De la Cruz primary school we performed for over 400 kids after the show they swarmed us, they didn’t want us to leave. It was almost like getting gang mobbed buy hugs and complements. They were pulling at our clothes and giving us complements and asking questions and asking for hugs from all of us. We couldn’t even get past the mass of kids who were blocking our way back to our empty storage room that we initially used as our prep room before the show.

There must have been 30 kids outside the window and peaking though holes in the wall to see inside to see what we were doing. As we drove off they lined the fence and waved though the gates “Adios Payasos!” on the ride home we talked about how much appreciation these kids showed us for performing for them. It really give me and the others confirmation for the work we are doing out here. 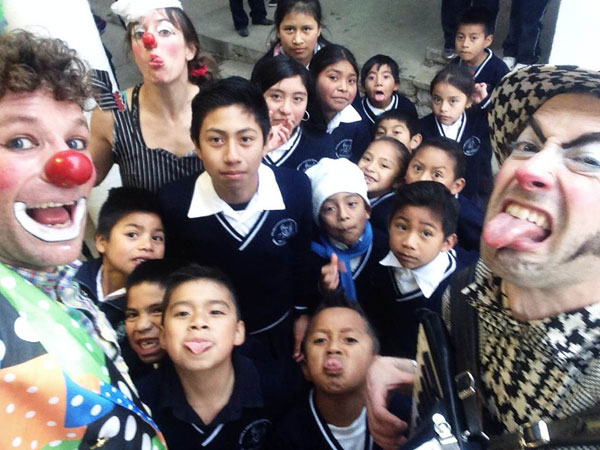