Today we did five shows, three of them in the middle of ward tents in the center of Port Au Prince after the quake..We shook hands and hugged with a lot of seriously injured people. Yesterday we did three SOS shows, packed up and moved and today we did five. They went very well, much better then I thought they would go in the hospital.  People laughed very hard.

First show  in the tiny waiting area of a treatment tent for handicapped folks next to Champs de Mars.  Decided not to play in the larger space surrounded by water leaking out of the latrine.  Full show for a small crowd, maybe 40 at the end, most of them handicapped kids.  Played with kids for about an hour and a half in the parking lot waiting for water and ride.

Second show in courtyard waiting area of the General Hospital, center of Port Au Prince.  250 people or more in a tight circle, completely blocking the front of the hospital.  Full show for mostly adults waiting for treatment, laughing and screaming like maniacs.  Lunch at a gas station restaurant.

Third show in a pediatric tent of the same General Hospital in a tent with a dirt floor, full of very seriously injured kids.  Maybe 40 minute show, including lots of hugging and hand holding with kids.  Nearly all have very difficult recent histories, family members–, and they were all laughing a lot.  We’re playing, adding more dancing and celebrating and silliness.  20 kids and 15 adults.  Many of whom followed us to the Fourth show at another pediatric tent.  More of the same.  Tiny girl with a missing arm and huge head bandaged hugging me over and over both of these shows.  One girl missing only a toe, but who spent three days next to her dead mother and is still in shock smiled for the first time.  30 minute show.  The sing a song skit is causing uproarious laughter.  Forty people but half of those repeats from the last show.

Fifth show in a adult ward tent, 30 people just 15 minutes, driver is pushing to leave on time and we’re exhausted. The injuries look even more serious.  I can’t say every adult laughed but most of them had a very good time.

Back home there’s no water so we bathe with a few bottles of drinking water and wipes and hand sanitizer.

We are well and amazed. 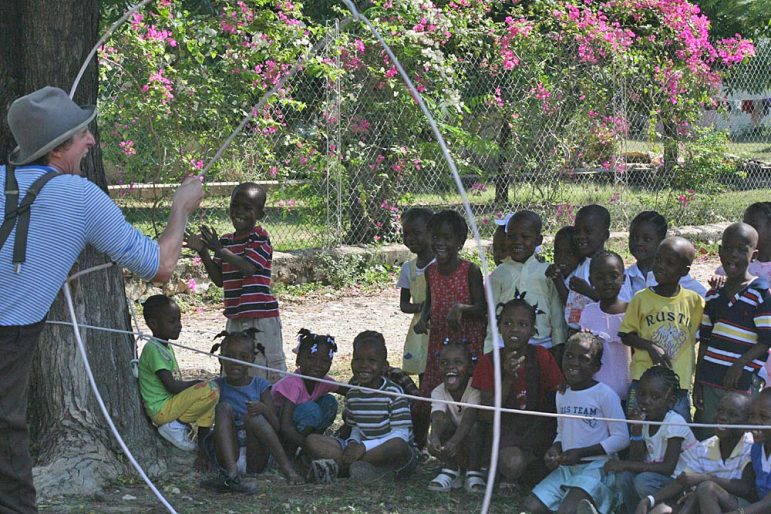