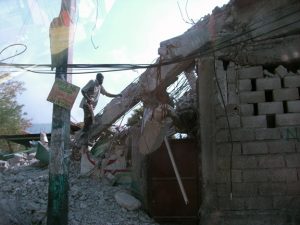 For this week we are in Croix-des-Bouquets, an area right outside of Port-au-Prince. Plan International is putting us up in a guesthouse here, a building left undamaged by the earthquake (but with a tall, cracked cement wall next door ever-threatening to fall on it). The guesthouse is crowded, mainly with Plan emergency response staff, so three of us keep our things in a single room, and sleep at night in tents set up in the gravel yard.

Whenever I wake up during the night there is a rooster call and response song that seems to be going on between all the roosters in Haiti, headed up by our local rooster. Our guy crows from a few feet away from our tent. He’s answered by several roosters a bit further afield, and then that chorus is answered by roosters further and further in the distance until they fade away. Then our local representative starts it anew. This morning there are eggs and jus chadèque for breakfast. (A chadèque is like an extra-large grapefruit. They grow here, and for this tour I named my clown for that fruit. Audiences are generally very polite when I tell them my name is chadèque, but once the other clowns start laughing at it, they realize it’s okay to laugh, and do).

At 8am, the driver Jean picks us up for our first show of the day, which is at a tent camp set up in a nearby park. One thing that strikes me about this tent camp is the variety of tents in it. It looks like it was started with one organization’s donated tents: there are rows of matching off-white dome tents. Then there are some rows of tarps set up over stick frames. Then it looks like the tarps ran out, because the next rows are sheets and other scraps of cloth tied to the same kind of stick frames. The rainy season is coming, and then the hurricane season, during which the white dome tents won’t stand much chance, much less the improvised cloth structures. NGOs are working to build at least temporary buildings for people to live in, but they won’t be able to house anywhere near everyone before the hurricanes.

There is already an audience of about twenty kids huddled under the shade of a tarp. We start setting up the show and by the time we’re ready, about a hundred and fifty community members have gathered. And we begin! We start with a parade with me on the trombone, Joe on guitar, and Heddy playing harmonica and waving the umbrella that becomes the recurring prop of the show. Next comes an acrobatic vying for position to be the one to do the opening show announcement. As the bossiest of the trio, my clown wins. We all three take a bow, the other two on the outside flip me over backwards on the way up, I get mad, and a chase ensues. This particular chase features a bicycle a kid left leaning up against the tarp structure. Joe jumps on it, and I sprint along behind him …

Another highlight of this morning’s show was during the second chase scene: I’m chasing Joe, and he puts his hat on a young man’s head as he runs by. I scold the man, pretending I think he’s Joe. The man turns and runs, joining in the chase. He leads around and around the audience, across the stage, back around. He’s a natural clown: stopping, articulating his head, looking at me and at the real Joe, then running again.

This weekend we premiered a new routine in the show. On our first night in Haiti, one of the Plan staff, a doctor who specializes in psychosocial support for children, asked us if we could work up a routine with a specific message. After the earthquake, many children here have been afraid to go back into buildings, even the ones that are not condemned. In Plan’s efforts to help children recover from trauma and encourage them to go back to school post-quake, they are working to convey the message to local kids that it’s okay to school, and that life must go on. “Would you make a routine about that?” he asked us, “It’s especially important here in Port-au-Prince.” It’s a message we could get behind.

So over our first week in Jacmel we brainstormed, and then rehearsed, and now the we have a new routine! It involves Heddy and me happily dancing with an umbrella, Joe getting jealous and grabbing it away from us, and our umbrella developing a mind of its own, dragging Joe around the stage, and shutting on his head. Heddy and I pull him free of the umbrella. We stand under again and invite him underneath. He refuses. As we encourage him to come join us, our words turn into a chant: “you don’t need to be scared – life goes on!” This rhymes in Haitian creole, and we get the whole audience clapping and chanting it with us. “Ou pa bezwen pe – lavi ap continue!”  The chanting encouragement of the crowd gets Joe to get up and come under the umbrella, which behaves itself. The three of us dance off together under the umbrella.

It was challenge to craft this routine in a way that would be funny and metaphorical but still carry a specific message. I worried it would be too blatant and didactic, or completely miss the point. But we’ve done it six times now, and it seems to work. There is a nice calm as Heddy and I dance with the umbrella. The kids laugh when the umbrella gets the better of Joe, and when they see him being scared to go back underneath. They love clapping and chanting along with us. After the show James, our contact from Plan, gets up and talks a little about who we are and why we’re there. Today is his first time seeing the show, and he likes the message. During his talk he explains in creole what we’re doing in Haiti: helping people get over the trauma of the earthquake by sharing laughter together, and bringing the important message “Ou pa bezwen pe – lavi ap continue!” I am on stilts at the end of the show and stand behind him leaning on his shoulders and watching the audience as he speaks. When he says these words the adults nod, and some say them along with him.

In the car on the way back from the show, James asks us if we’d mind adding an extra show that day. We decide to fit it after lunch and before our scheduled afternoon show. It’s in Jean the driver’s neighborhood, so he goes over in advance to let people know about it. But when we get to the appointed spot, the community’s church, there is no one there. It’s mid-day, and HOT, and people are resting. We decide, since we’re already there, to unload the props and see what happens. A few kids walk over to see what’s happening, then a few more. We start the show for an audience of about twenty, and by the end there are at least sixty watching in the shady church.

The next show is at another tent camp with a similar array of tents, tarps, and cloth structures. As we set up and check over our performance area we warn each other of sharp rocks and pieces of broken glass that are everywhere sticking out of the dirt, and work out how to modify the acrobatics and falls in the show so nobody has to lie on the ground. Which is important for us to think about, and feels weird at the same time because many of the people who are milling around watching us set up are barefoot.

Before our show there is a 10-minute presentation by a Haitian drama group sporting World Vision t-shirts. They do a skit and then a song and dance about hygiene: wash your hands before you eat, put three tablets in your water to purify it, or boil it for 15 minutes. Someone next to me tells me they’ve been touring to all the camps to spread this message.

It’s a nice, big, multi-generational crowd that’s amassed by the time we start our show. Lots of laughter. One surprise highlight comes during the mask dance. Heddy and I put on masks and dress up as an old man and an old woman, respectively, and dance with each other and then with audience members. People laugh as their friends come up to dance with these strange old characters. But this time a middle-aged man runs on stage and starts dancing his own dance. He cuts in on Heddy’s dance, sweeping her across the stage. When I finish dancing with my partner, the man scoops me up and twirls me around. Then Joe steps up, not to be left out, and the man picks him up in the air!