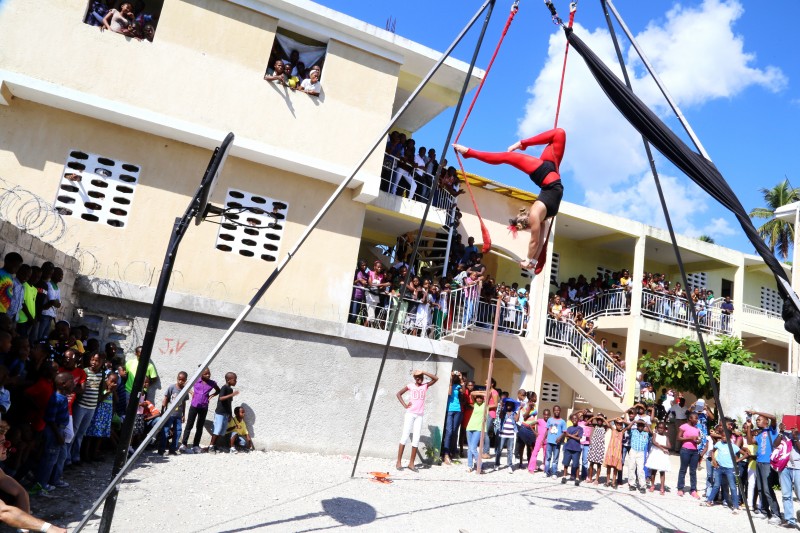 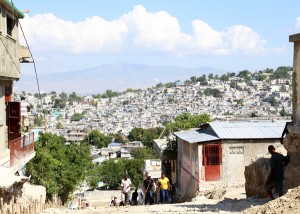 Nov 19th — Port au Prince
Poverty is apparent everywhere.  The houses look like converted bunkers, everything is cinderblock and metal with sheets of plastic and wood filling in the gaping holes.  As we drive from the airport, the dust is so thick our eyes water and we pull up our shirts to cover our noses, preferring to breath our own sweaty odors over the suffocating mix of dirt and car exhaust.

Seven of us are crammed into the back of a tap tap — a small, partially covered pick-up –  with most of our luggage.  It takes over an hour to arrive at our accommodations, inching forward up a never ending hill in bumper to bumper traffic, unfazed utilization of the sidewalk as a passing lane doing little to ease the congestion.  When we finally crest the top, a group of men are rowdily taking shots in the center of a traffic circle as we crawl around to the left.  They take a moment to stare at us in quiet disdain and then resume their drinking.

Tumbling along dirt roads and passing through a locking iron gate set into high concrete walls topped with shards of broken glass, we are greeted warmly by Jocelyn, the lady of the guesthouse.  She is full of energy and we quickly find out she is an excellent host as well as an excellent grandmother — to 15 kiddos (and one brand new great grand child!).  The inside is lovely, clean and has everything we could need.  We sit down to a long table heaping with a home cooked dinner.  Everyone is content and slightly slap happy from a long day of travel.  We briefly discuss our plans and hit the hay by 10 pm.

We have our rig!  And we can’t use it.  At least not at the first location for today, which is a tight courtyard repeatedly crisscrossed with different colored pieces of ragged twine.  We take down two of the strands to make room for juggling/diablo and begin to set up as the children file out of the building, peeking at us nervously as they line up for the show.  There is not enough room for them to all sit, so they stand in rows, the little ones surreptitiously trying to edge their way to the front for a better view than the backside in front of them.

We are already down a clown, as Bobby has been hit with the Haitian sickness and can barely lift his head from excessive output from both ends.  He is being well tended to by the ladies of the house, but we miss our adorable and goofy boy clown.
We begin the show and are immediately showered with peals of laughter and screams of excitement.  These children are hungry for entertainment, outgoing and ready to play along.  They cannot get enough of the hobby horse number and are all galloping in place along with their chosen comrade on the stage.  When the child joins Dave and Jan in some astride the stick horse butt slapping, the audience can hardly contain themselves.  They begin to jostle and push each other forward until we have to intervene and lay down a rope to act as a boundary.  These crafty children keep shuffling the rope forward with their feet, edging closer and closer, angrily manhandling one another in any attempt to get closer to the action.
Our second show is at Three Angels run by a very kind white haired woman.  We are able to set up the aerial rig, but only at half of the height.  Doing trapezes at waist height was a new, and slightly mollifying, experience.  Still, it was viewed incredulously by all the patrons and we gave a rousing show to a slightly more timid, but happy audience.
Nov 23rd — Port au Prince
A two show day beginning at the social medical center that our house lady is a large part of.  Still missing Mr. Bobby, but he is on the mend, able to keep down almost a whole cracker!  With sloping ground and minimal space, we are again without the rig, but manage to entertain the small number of children and onlookers from the street.  After the show, we are given a tour of the center, fed Haitian style sloppy joe’s, and treated to the children singing their thanks.  I sat on the floor with two little girls in beautiful dresses on my lap and listened to these young adults sing their hearts out.

We pile back into the tap tap and drive for an interminable amount of time to our next location.  Turning off the main street onto dirt road after dirt road, we believe the next turn will be off a cliff when we suddenly dead end into a community basketball court that seems to be at the edge of the world.  It is a stunning location, high above the city and jutting out over a precipice.  We are able to set up the rig to full height (JOY!) and put on a show for over 300 neighborhood folk who jostle around us, watching from windows, rooftops, and anywhere they can catch a glimpse of the strange clowns.  It’s a rowdy performance, full of masculine energy, and we love it.  We break the rig down among an audience still practically on top of us and slowly edge the tap tap back out through children running alongside and waving goodbye.

As it’s a Saturday night, and it was only a two show day, we decide to try a bit of Port au Prince night life and hit the town.  Menley wisely takes us to a bar that is accustomed to ex-pats, and we settle in for some drinks and dinner.  A very strange place it was, with an incredibly expensive lighting system, the strangest added in sound effects from an unseen DJ, and plenty of beautiful ladies, grudgingly tottering behind their older ex-pat companions in amazing heels. 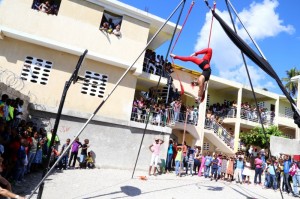 An incredibly squished car ride on inventive roads eventually leads us to Grand Gueve – our home for the next few days.  We are staying in little partitioned off rooms in plywood cabins with group bathrooms and showers.  Although its a bit like camping, with reliable plumbing and electricity, it gave Madame Jocelyn’s a run for her money.

The beginning of G.G. is a bit of a blur for me, for I too caught the Hatian sickness of death.  Slight stomach disturbance and nausea led to ebullient vomiting and eventual expunge of everything inside.  I missed only one show, but forwent food for about two days.  I also entertained the group with some delirious conversation and projectile powers.

We had some great shows in G.G.  I think my favorite was at an orphanage called Be Like Brit, which I immediately thought meant aspire to be English.  However, it was built as a tribute to a relief worker named Britney who died in the earthquake.  Her father erected the orphanage in her honor.

And what an orphanage it was!  Set high on the hills with an incredible view overlooking the ocean, the place looked more like a resort than a place for parentless children.  We played to an audience of only 40 or so people, but the children were so warm and loving and eager that we were immediately smitten.  This was the morning after I cleaned out, so I was running on fumes.  But those adorable faces pushed me to complete both aerial acts with a beaming grin, and plenty of energy for holding hands and little ones in my arms between acts.  They were fascinated with my tights and would absentmindedly rub their palms on my thigh while watching the action on stage.  As we left, we had to pry their little arms away, and I almost became a mother right there.
Jacmel

Another winding and death defying car ride, this time through the mountains, led us to the beachside town of Jacmel.  Joe, our rasta B&B host, took good care of us in a laid back way, chauffeuring us to shows that were set up minutes before, always finding us food eventually, and chilling us all out with his relaxed state of being.

Joe’s B&B was beautiful, right on the cliffs of the water, with water and power and incredible star watching.  We made friends with his assistant, Papooch, and his children and the neighborhood kids.  Joe is doing some amazing things for the area, including inventing a sustainable alternative to the all too popular and polluting charcoal.
The shows in Jacmel were lovely though a bit less memorable.  They were usually under organized, though we had a good school show or two.  On our last night we were invited to a going away party for a co-worker of Joe’s and saw a whole different side of the Haitian and ex-pat culture.  Fernando, a Spaniard who was leaving Haiti for Guadalupe, loved voodoo and alcohol.  These things, in one way or another, were both very prevalent at his party.  Though not a true ceremony, we did get to see a real voodoo priest do a small assimilation of what might happen at a real thing, including a drawing in on cornmeal on the ground and setting alcohol on fire and tapping it all over Fernando’s body.

Back in the City — last few days in Port Au Prince 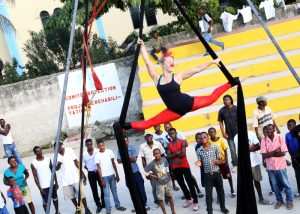 A most dizzying and scorching car ride in the back of Joe’s large truck delivered us back to Port au Prince.  It was difficult to return to the less than pristine and bustling city after sleepy little seaside Jacmel.  We had a general group lethargy and had to push through the last few shows.

We ended our performances with two completely opposite and equally amazing shows.  The first was in an open park in the worst neighborhood in Port Au Prince.  Setting up the rig among endless catcalls and comments, we performed to an incredibly diverse and large audience, the energy pulsating with danger and violence just a drop of a hat away.  We performed beautifully, entertaining all the way to the women peering over their vegetables from watery deluge of a charcoal market down the road.  Getting packed up presented some difficulty, with the entire audience following us to the car, grabbing at our belongings, asking for our hands in marriage, and stroking and licking my boots while we tied the rig to the roof.
Our very last show was supposed to be a workshop at the social medical center.  However, when  we arrived, the standard lack of communication in Haiti reared its head again and we were asked to do a show for the school across the road.  In a narrow gravel hallway between open classrooms, we did the best we could, without costumes or all of our normal props.  And it was fantastic.  The children were wild for anything we did, screaming happily and shoving continuously to get a better view.  Without the rig, I do very little in the show, which was a blessing here as I was on crowd control and got to crouch among the children.  They latched onto me, piling into my lap and tirelessly petting my hair.  Upon ending the show, we laboriously clomped down the hallway with children literally hanging off of us, and eventually disentangled ourselves from their loving grips.  What an experience.