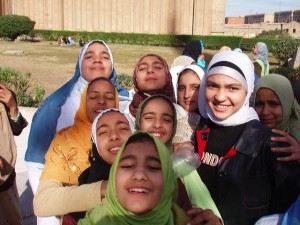 Almost three years ago, Elisa and I came to Cairo for the first time. Elisa had a contact here who was volunteering at an orphanage for girls, and we thought it might be nice to bring the place a little laughter. This is how Clowns Without Borders: Project Egypt began. Well, this week we returned to see the girls for the third time, bringing with us our newest team member, Dave, and a wonderful new half-hour long show. It was so exciting to be with the girls again. They have all grown so much! We were also happy to meet new little ones too.

When we first clowned for the girls they were quite shy and unsure about all of our strange, silly behavior. Nevertheless, last year, when we returned and performed a second time, the girls seemed to remember us and they enjoyed our show a whole lot more. As for our most recent visit, I am very pleased to report that the girls were ecstatic to see us again, and that they laughed thoroughly at our clownish proceedings. Not only that, they seemed to have been anticipating our return and had much they wished to share with us: particularly acrobatics!

I wish everyone reading this message could have witnessed the high-flying hysteria in the orphanage that night! The girls showed us moves from our last show, like the two-high, (which is when one person stands on another person’s shoulders,) and then pleaded with us to teach them more. The pleasure was all ours! Imagine a smallish room filled with around fifty girls, ages 3-14, all wearing their pajamas celebrating with cartwheels, flipping over each other’s backs, climbing on shoulders, falling, and laughing. Such fun! Afterwards, we were invited to join the girls for supper, and so we partook of the most awful tasting and yet spiritually gratifying meals this clown has ever eaten.

Elisa:
After taking an hour-long mini bus and walking through muddy streets past working donkeys and stray dogs, we arrived at Kuku Kaka School. Kuku Kaka School, which if I have the translation correct means “Boys and Girls School”, is held in a building still being constructed. The upper floors and roof are yet to be completed. We observed that the ground floor of the building smelled like a sheep house, and I suspect farm animals are often held there. All classes, preschool through six grade, are tightly squeezed on the first floor. The fifteen preschoolers have a classroom the size of a walk-in closet. A few preschoolers were sitting on the desks because there wasn’t enough room for one more chair. To get out of the classroom all the children had to climb over the desks. To greet the students we had to take turns peaking our heads around a wall to introduce ourselves because there was just no room for one more body inside. While greeting them we were overwhelmed by the smell of the toilet, which was next to their class. It was a classic hole in the floor toilet. Never had a hole in the floor smelt so strong to me, which tells me that there were probably plumbing issues in the building. Water and sewage from the toilet worked its way throughout the school beneath the feet of children.

Since there was no room in Kuku Kaka for our clown show they walked all the children and us across the neighborhood to a large open dirt area used as public space. Here we started performing our show but quickly were mobbed by the excited children. After renegociating the imaginary line between audience and actors we continued with our show. All was going well until 10 minutes into the show the principle informed us that a policeman was ordering us to stop our show and for us all to return to the school. The policeman couldn’t handle witnessing 150 Sudanese children laughing and enjoying themselves, and had to exercise his power by putting an end to it. The teachers and principle didn’t even flinch at this order as they are used to being treated as second-class citizens by Egyptians, (even though Egypt and Sudan have a borderless equal rights agreement.) We were sad that the kids couldn’t see our whole show complete with acrobatics, juggling, slapstick, music and magic, but after returning to the school we took time to visit with each classroom. We sang them songs with Gwen on accordion, and I showed them the magic disappearing handkerchief.

Dave:
The children are wonderful. It is joyous to see the little people burst into laughter and smiles. Many times the smallest do not know what to do with the strange fools cavorting before them. Who would have know that being a clown could bring joy to anyone anywhere regardless of cultural and linguistic barriers. Clowns know this and what’s more love it.

The city is dusty, dirty and overcrowded. Despite the noise and confusion people rarely reply to a smile wink or nod with anything but the same. Beneath the dust and dirt can be found ancient architecture and hidden wonders. Within the noises of streets and people hawkers repeat melodies strange to western ears, and in places the music of these new lands springs forth with passion and majesty. The world is at once strange and wondrous, enticing and repulsive, but throughout filled with little ones worth all of our efforts including laughter love and compassion.

From the field: November 24th, 2007
Salaam Aleekum! We have had a busy first week here in Cairo. We have visited old friends and performed at St. Andrew’s School and Modern Education Center. We have also performed at some new venues: The Children’s Cancer Hospital, The Sudanese Future School, Cannossian School and the Sudanese School of Ard el Lewa.

Gwen:
This week we performed for and taught play to approximately 765 kids and the 300 adults who teach and care for them. We beat rhythms on cowbells, shook tambourines, danced, flipped, performed magic tricks, laughed, sang, and smiled. Our audience, the young survivors of war, poverty, ethnic discrimination, and sorrow, laughed and smiled with each clownish act we performed. One part of the show that really gets the kids squealing with laughter is when our clowns have a stand-off, Old West style, and Elisa and Dave battle one another with rude noises and tickling. Then the scene slowly transforms into a story of flirtation and clown-love while I play a romantic melody on my accordion! The children think all this is hysterical!

The play workshops are extra special this year thanks to the rainbow colored parachute we brought with us. When we unfurl the enormous circle of bright material, the kids get so excited they scream! Together, Dave, Elisa, and I show them how to roll a ball around the parachute using group effort and patience. The smaller children love to run around underneath the parachute, delighted by the colored light washing through the material. The space is completely transformed by the joy, laughter, and fun of it! We later heard through the grapevine that one of the school coordinators said we made the children so happy she felt like crying. We are just that happy too!

Dave:
Good morning, good ev’nin, good day or wherever you are whenever; a salaam malaaykum, peace be unto you. This is the new clown in the old world with the sounds of god and peace bouncing off the sides of buildings or spilling from countless lips. Dust is omnipresent. Pollution chokes the inner city but the air clears out into the desert where gated communities are being built while ancient Cairo decays, carries on, or just plain is. Block style project housing, modern glowing green mosques and endless warrens filled with goats, cats, chickens, mules and people rub elbows.

Among the crowd
Amid all this strangeness; clowns three find people, displaced by war, pain and unknown what, to try and bring laughter and lightness as a gift to the trying children. The young people all brighten when addressed with a courteous hello and a smile. Many of the little ones take great joy in being offered a hand to shake or a quick ride skyward on the palm of a foreign clown.
The children come here from once homes in Sudan and other war torn lands, Somalia for example. It is a wonder to see children explode with laughter as we play the fool for them. Wandering and wondering what thoughts strange faces hide, until a smile, a wink or leaping multicolored balls, brighten many into smiles, elicits the conclusion, they think of everyday things: food, water, shelter…. school, work and an uncertain future.