CWB – USA recently wrapped up a tour to Puerto Rico. Molly Rose Levine, our very own Program Director, acted as a non-performing team leader for the project. When she arrived on the island, it quickly became apparent that the devastation wrought by Hurricane Maria was both visible and hidden.

I’m from California, and knew very little about Puerto Rico before the reports from last year’s hurricanes started coming through. As I prepared for the tour, the places and names on Google Maps meant little to me, and I was excited to develop an understanding of this island so that I could contextualize the communities, the distance travelled, and the different micro-cultures we would visit during our tour.

From the moment I step out of the airport and am greeted by our local host, Monique, I start learning. I learn that Puerto Rico pays a 23% import tax on all goods that come to the island, even those that come from the United States (Puerto Ricans are all U.S citizens). Puerto Rico has the highest number of enlisted citizens out of all U.S. states and territories and is also home to the highest number of veterans. The ground in Puerto Rico is untouched by chemicals and GMO fertilizers. The entire island is full of organic soil—it’s an ideal place for a permaculture revolution. There are no chemtrails in the sky in Puerto Rico.

Puerto Rico was sold to the U.S. from Spain, prior to World War II. Modern island culture grew from contributions of the Taino Indians (indigenous inhabitants), Spanish and U.S colonizers, and Afro-Caribbean culture. The island’s closest neighbor is the Dominican Republic. Most importantly, the people of Puerto Rico are amazing, and their culture is warm. They are also very family-oriented.

Even now, almost six months after the hurricanes, destruction is everywhere. It’s not comparable to Ghaza or Aleppo, but it’s a reminder of the other, less obvious fallout that remains. Ragged billboards line the highway. All of the street signs and highway signs are sideways, upside down, or torn off completely. The streetlights work about 20 percent of the time. Many small businesses have closed, and the island faces a historic population loss, as people emigrate to the States.

Driving into San Juan from the airport, a four story building catches your attention: The top two floors look like a cutaway. Three of the four walls are ripped off. In Humacao, on the south side of the island where the hurricanes first touched down, huge covered basketball courts are crumpled like paper—bleachers, roof, and all. Gas stations look like skeletons. Along the highway, even as new power lines go up, you see rows and rows of destroyed highway lights and electrical lines, the concrete snapped at the bottom like toothpicks.

A local abuela hosts us for lunch during our performance in Naguabo. We sit and play with the family’s babies while eating a lunch of boiled yams, malanga, and green bananas (malanga is a traditional root and also my favorite!), and an egg and dried fish salad—typical food for the coastal region. Many of the women in the family spend time with us while we share the meal, and we have a chance to hear local gossip. The people around us swap horror stories about trying to get the insurance companies to approve their claims and give them what they needed to fix their houses. As we drive around the island, it looks like about one-third of the houses still have the signature blue FEMA tarps as roofs. Many people lack the money to make improvements. 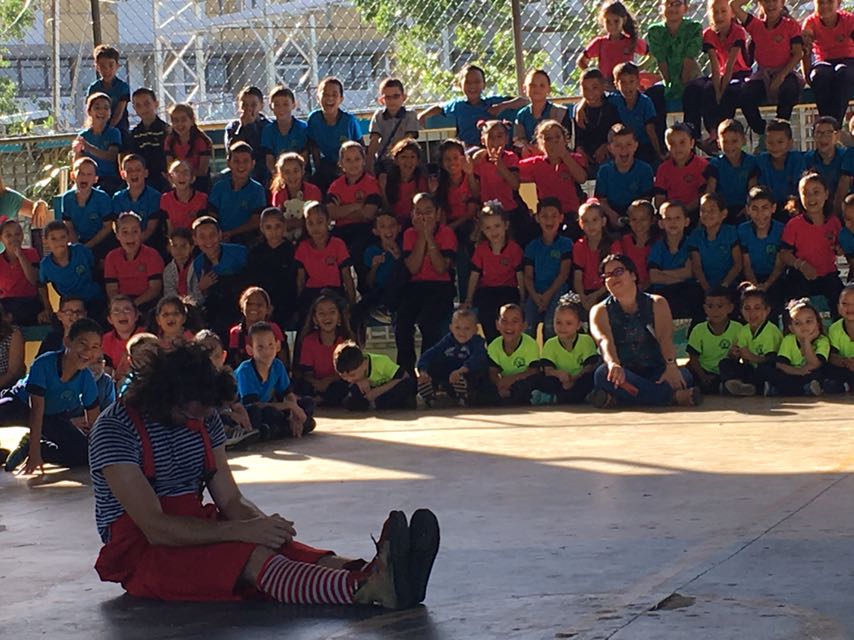 The view from the interior highway that takes you from Yabucoa to San Juan is equally devastating: Fields of broken wind turbines, their giant propellers snapped off and destroyed. Imagining what that was like when it happened is terrifying. In the mountain municipality of Adjuntas, we perform in a school where the old roof is lined up in neat piles behind the building. It has been collected after blowing away completely. On the coast in Arecibo, trees and telephone lines still lay across houses. Other houses are shells, missing their walls and windows. The sea glass that washes up on the sand is more ceramic, more cement than glass, decorated with lighthearted colors typical of Puerto Rican homes. How many fragments of Puerto Rican houses are now making their way through the ocean, beaten into smooth, endless sea glass?

So much of the destruction is invisible. Even in places where the homes appear undamaged, many families have no electricity or clean water. In fact, one-third of Puerto Ricans are still without power. We see a man taking a shower in an open water pipe along the side of the highway. The cost of fuel necessary to run a generator is significantly more than the normal cost of electricity.

The average annual income for a Puerto Rican family is around $18,00 and the poverty rate on the island is forty-six percent. The cost of delivering fuel and water is impossible to maintain, and families in the most rural areas have been told that it may take up to one year to regain services—if ever. I didn’t know any of this before I arrived.

Schools that remain without power run a shortened day, from 7:30am–12:00pm. Some of the teachers describe how parents now bring their kids to school less frequently, because they can’t go to work and then come back to pick them up in only a few hours. Children are denied the opportunity to learn in a stable environment, and the teachers don’t have the resources (like a full school day) to teach effectively and prepare them to advance. Without potable water or electricity in their classrooms, children’s human right to an education is violated. No matter how dedicated teachers, school social workers, and administrators may be, they don’t have control over basic resources. And even in schools that have regained electricity, teachers often return home at night to lack of water, power, and destruction in their own communities. No one has been untouched in the wake of these hurricanes, and people feel forgotten and diminished by the rebuilding process. 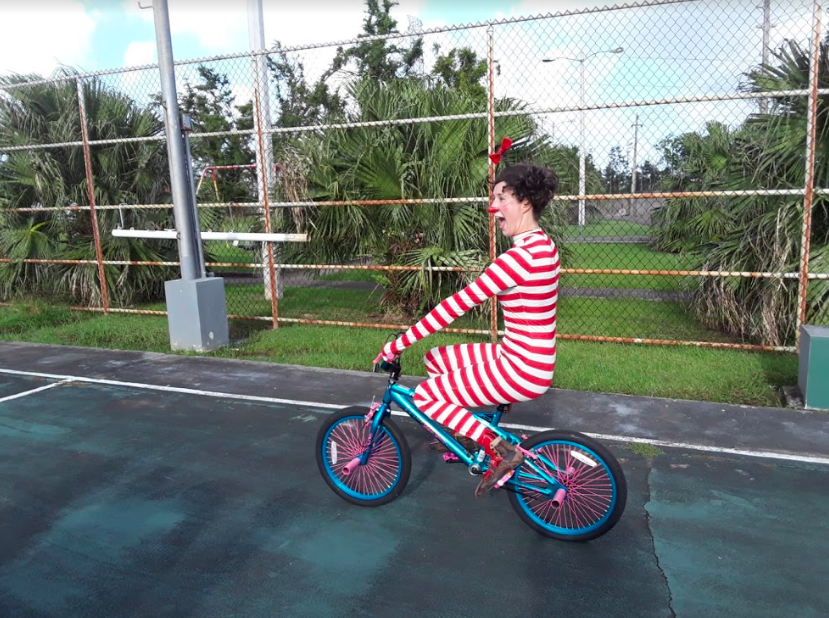 You don’t see the destruction during the show—the kids are the same everywhere. They’re so eager to play. But you see it in the eyes of the sound guy who helps me with the speakers for our show in Humacao. Sitting next to me along the wall, watching the kids toss juggling balls into hats and run around after our clown riding his tiny bicycle, the man’s eyes fill with tears. He says that it means a lot, to see them this way. Another father tells me that every time he drives into town, he feels like crying, seeing what has happened to his home. You see it in our host, her level of stress about making sure that we charge the solar lights every day, that we have extra barrels of water (just in case, for the rolling blackouts and water outages we experience in Bayamon almost daily).

It’s harder to photograph the anger and frustration that people feel, and it’s also against our photo policy. This is why, in my writing, I hope to convey some of what I learned.