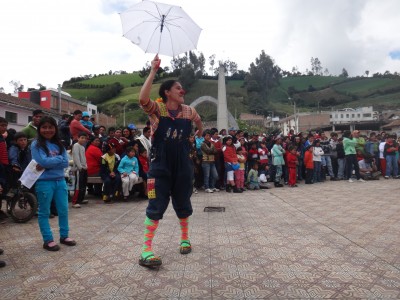 Each morning, I’ve woken up early to the tune of “cielito lindo” spinning melodically in my head.  It has been either the hot morning sun near the cost or cold brisk air in la sierra that starts my day and I think of this gentle song, the same that opens our show enabling us as a group of 7 clowns to connect to groups of hundreds of people in a non-aggressive, simple and open way.  Clowns are not universal and are often frightening; song on the other hand, is.  We use this traditional song to welcome our crowds, invite audience members forward and to create a safe place for an hour or more of play.

Our show is all about inclusion.  Our partners at UNHCR asked us in the beginning of our tour to incorporate a theme of inclusion as our primary audiences have been refugees from Colombia and internally displaced refugees, all witness to trauma whether it be violence, structural violence or racism.  The clown is a foreigner itself with its strange clothes, red nose and unpredictable behavior.  With 8 shows for nearly 1,000 people we have created a welcoming atmosphere that results consistently in old and young people cheering and dancing together by the end of each show.  Why does this work?  How does it work? I’m not sure but to witness this transformation it creates is profoundly inspiring.

This past Sunday we brought our show to the small barrio of San Gabriel just outside the city of Tulcán.  Markets flourished as people came and went from the open doors of the cathedral central in the town square.  A few clouds capped the mountains that surrounded us keeping the air comfortable and cool for our show.

The clowns arrived in our vans and marched chaotically down a cobblestone road onto the plaza.  We quickly divided ourselves into groups of two to improvise with the folks in the market; by this play we were also able after about 30 minutes or draw a crowd into the central part of the market to watch our show.  We soared like acrobats and tripped like fools over the stones paving the market.  Some clowns chose to flirt, others preferred dancing to draw the community into the performance space.

I found an affinity with the older men in the crowd as I compared my beat up derby with their Sunday hats.  My hat, however, did not stay on my head, popping off each time I tried to put it on, paying homage to a classic clown hat bit.  When it hit the ground I would reach for it and accidently kick it further away from me with each step.  I kept kicking until someone would kindly pick up my hat for me.  They would place it on my head, but always a bit too tightly and covering my eyes so the rest of the bit would be me wandering through the crowd completely blinded by the hat.

Our collective play brought forth a crowd of about 600 people, all ages to watch our show called “Chiarivairi.”

Our goal is to offer anyone a chance to play and laugh, simple as that.  We focus on children, but have found that there is a reverberation of joy that transcends age when we do our work.

Before we entered the square and before the hat tricks of the day, I had a troublesome encounter.  Along a sidewalk opposite the cathedral worked a line of shoe shiners, not unlike those I meet working in the subways in New York.  One shiner drew my attention though because he could not have been more than 10 years old.

He was squatting at the foot of a plastic chair working vigorously on the shoe of another boy far less his age.  This young boy was wearing his fancy Sunday clothes and I assumed was on the way to church.  The boy worked at a fever pitch perhaps trying to keep up with the men next to him and the young boy who was having his shoes shined watched his friend intently.

I pulled out my ukulele and tried to offer at least some background music, matching the rhythm of the shiner.  The child who was having his shoes shined looked up to me with a smile, but the boy laborer barely winked an eye as he was so focused on his task at hand.  He was undistractable, intent on finishing his job and doing it well.  I finished the song I was singing and left the boys feeling a sense of defeat.

Rarely in my work with CWB over the last 10 years have I encountered a child working so hard that he or she does not take a moment of pause to play.  We have worked with child laborers in many countries, in both urban and rural settings, but more often than not children will take a break when entertained and act like children.  This particular child had the diligence of an old man, a worker who had been at his trade for decades.

It saddened me to witness this loss, this loss of childhood.  This boy had lost something integral to a happy life as his playfulness had been devoured by forces far beyond his control.  He had lost one of the only rights of a child, that is the right to be playful.

We’ve worked with restiveks in Haiti (child slaves) who have come to our shows and during our time playing with them, they have stopped to ask us what time it is to make sure they get back to work on time so as not to get into trouble—but at least they played.  I was devastated that this child in Ecuador was unable to let go, even for a moment.

It is my hope that the work of CWB can offer the simple right to play to all children we encounter.  I hope that the clowns and actors we share in the world have the skills necessary to inspire play, to allow a child to embody being a child and feeling empowered through play.  I hope that never again do I meet a child who is so wrapped up in his own work, that he no longer has the heart to play.