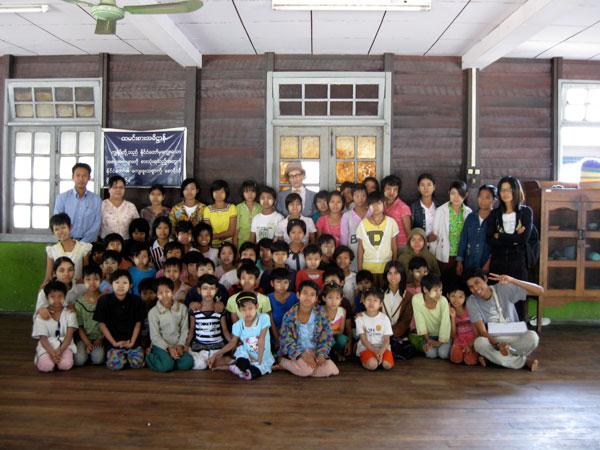 Big show Day this morning at the Alliance Francaise. The French and Swedish Clowns Without Borders shows and my own converged on the front lawn, offering a great morning entertainment to some 415 children. Both the French and the Swedish shows have been touring in Shan and Mon states, and both are creations with local Myanmar artists. The Swedish show more along the lines of a circus/vaudeville show with numbers by individual artists linked by group numbers including acrobatics, dance and a fun chase scene. The French show is a story about an English bird collector who is looking for a bird he has lost with a great many scenes. Three Myanmar actor/clown/comedians play major roles and have the kids in hysterics, and it is wonderful to see both shows.

In the afternoon I head to the outskirts of town in the EMDH truck (with two activity facilitators and two team leaders) to the Myinthar Myo Oo Monastics Education Centre. It is my first time performing in a Monastic School this year, and I enjoy meeting the head monk, and being in a non institution environment. In some ways it is almost a day off, although I sure sweat as I dig into the funny. Definitely not a cool day, but then again, that concept doesn’t exist here this time of year. People keep reminding me that it gets Really hot in April, and that this is only a medium on the temperature scale. The workshop at the school is with younger children that the other days, 6-9, but they still dig into the exercises, and have a great time. Tomorrow it is back to the Training School world, the joys of bringing in laughter and opening up expression in challenging environments.

The Woman’s Development Center is on a little bluff in the midst of the Golden Valley, the most unlikely place for an institution as it one of the wealthiest areas of Yangon. I am surprised to find myself in a stately room with chandeliers, stuffed chairs with wood carvings and a beautiful wooden floor. I inquire to its origins and I am told it was built by Indians before WWII. The women here are over 18 and are doing vocational training such as sewing. There is a great deal of laughter, and they howl at the sight of my bald palate and how I play with my hair. I have learned a few more words of Myanmar, and now am using the phrase puré puré, hot hot as I wipe the sweat down during the show. This too they find hilarious. Indeed it must be 100 degrees outside today, and there is a good deal more humidity in the air than in Mandalay. So much so that my cigar boxes are a little sticky.

The workshop goes very well. We have a great time indeed.

The afternoon show is equally successful if I dare say so. I have now learned my “ Yes I’m going…” song in Myanmar, which I have taped to the top of the uke. I make a little joke out of having trouble reading the third line off the uke which they enjoy. I have taken to playing up the rock and roll side with a gritty gravely voice, and a little kick shuffle dance. The girls love it. No they certainly don’t think I am a rock star, but they clap along enthusiastically.

The workshops are going well. The girls today were enthusiastically joining in, and picking up the mime relatively quickly. They are enjoying expressing their humor after the usual initial hesitations. There are always a few in the group who are truly quite funny and enjoy playing it. The butoh style slow motion brings in incredible focus, and a sense of peacefulness. The idea of them scaring me as monsters was a big hit this afternoon with the girls. There is more to this than meets the eye. More about that (hopefully) in a later post. Next stop is calling. All in all things seem to be going quite well.