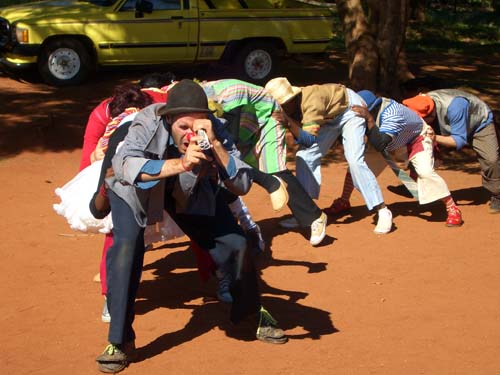 I am writing from Pigg’s Peak, in Swaziland, and I don’t know where to begin. I suppose it’s not even been a couple of weeks, but time is dilated to such an extreme point for me at this moment, and so much has occurred, that it seems to have been much much longer. We met all together in Johannesburg, South Africa. When I say “we” at this point, I’m referring to Sarah, Jamie, and I- the American clowns on this expedition. We stayed there for a few days, staying at the house of Garth the Juggler, a South African clown and modest genius with a small juggling ball factory in the back of his place- the only one in all of Africa. The town was pretty interesting; the remnants of Apartheid are everywhere, and they are sometimes surprising: one day at the grocery store, thunderous applause erupted when a white person was arrested for shoplifting…

After gathering supplies and rehearsing, we set out for Swaziland. For those of you who don’t know (and don’t feel bad; it’s tiny), Swaziland is a small landlocked nation mostly surrounded by South Africa, and which shares a small border with Mozambique. It is one of (I think) two remaining absolute monarchies in the world. The HIV rate here is 42% of the adult population, and the life expectancy is 32.

A midnight flat tire later, we arrived and have been here for five days since. We are working on the show here, collaborating with a troupe of Siswati clowns who live in the area, and who use clowning to educate kids about HIV/AIDS, from prevention to treatment to destigmatization. They had such an intention to get the information out to the youth (some of them are peer educators on the topic), that we began making the show centered around helping them do that. Before we got here, we didn’t know how many of them would really be able to participate. We had to wait and see what the deal was going to be upon arrival. As it turned out, there were several of them, and they were all completely excited. Our focus as a team turned from making a show for the kids to fusing these companies from completely different cultures. We’ve been working huge long days, early in the morning, at a community center in this small town. We spend the days working on the show with the Siswati clowns, learning about Swazi culture from them, and helping them with their acts… technique, juggling, stilt walking… they are incredible and so talented. Clown, and even performance, are new to several of them, and it’s great to see them come so far in just a few days. Working so closely with them has been so illuminating. They are living in a COMPLETELY different life situation than we have been, and we meet together in a love of laughter and a desire to play together and bring this work to these kids whose lives are so full of pain, loss, and difficulty.

I know I sound corny and cliche, but the fact is that so many of my realizations and observations since arrival fall into that category, and I’ve given up trying to rephrase it all, or to make it sound more jaded or whatever it would take to say what I’m feeling in any other way.

After working with the Siswati clowns for a couple of days (two of whom have CLICK SOUNDS in their NAMES, which makes them hard to remember, and even more difficult for native English speakers to pronounce), we realized some things about their situation. The unemployment rate here is at least 40%. Some of the nieghborhoods have no water or electricity. Some of the actors are walking miles to get to a bus to take them into the town every morning so they can do this work. Several of them are extremely poor, and we realized that we had to bring breakfast to the rehearsals if we wanted them to have food; it just isn’t available to them otherwise. One of them lost 3 brothers last year (at least 2 to AIDS), another lost 2 siblings, and that’s just the ones I’ve heard about.

The leader of their group is an amazing man named Sibusiso. He is hilarious, and a great member of the ensemble. He’s 32 years old, HIV positive, supports three children, and apparently lives in something like a mud shack. He talks about being HIV positive, which makes him an absolute anomaly in this place, where few people understand or talk about this disease, which is shrouded in myth and prejudice, and will soon have killed a massive percentage of the population. Even though this death and poverty surrounds them, the people here are so open and friendly; everyone smiles and everyone has welcomed us in with open hearts. The actors have put so much energy into this project, and we are really forming a good little group. On the road there will be five of them and three of us, and the gender balance is equal. It’s a fun mix, and the show should be great. The kids here are suckers. I guess kids everywhere are suckers. Nonetheless, every little kid we walk past- on stilts or in a clown nose or with a simple magic trick- just laughs and screams until we leave. The shows for hundreds or thousands of them should be a blast. We leave tomorrow for Mbabane, the capitol, for three shows a day for the next two or three weeks there and in another town called Nhlangano, which is also difficult to say. I’m sure that I will be learning more and we’ll be having some incredible experiences once we get out to the kids, and I’ll let you all know how it goes. Thank you all for all of your continuing support.