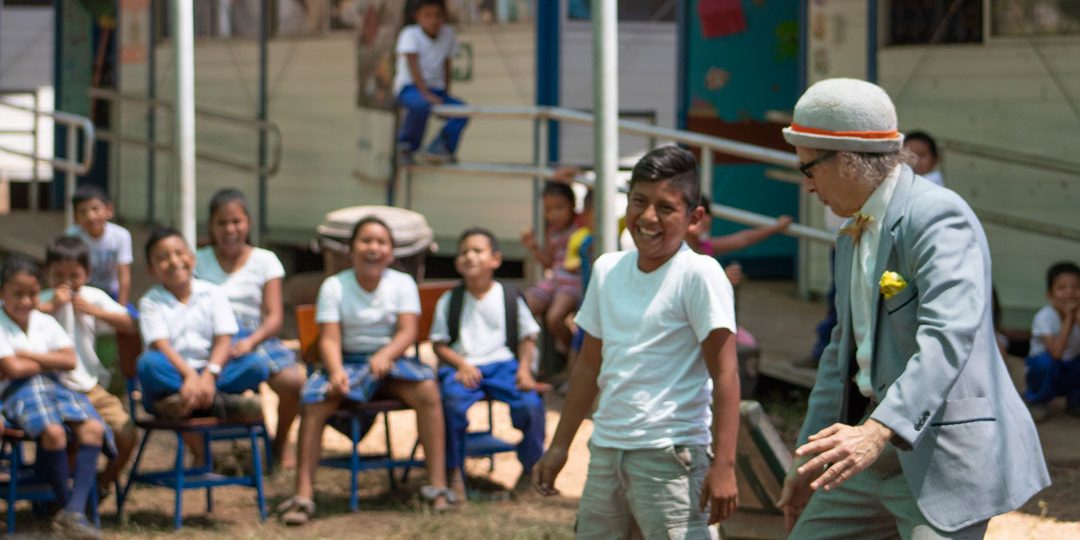 CWB – USA founder Moshe Cohen taught various workshops throughout Guatemala during his March, 2019 tour. He was surprised and delighted to find out that meditation, which Moshe brings through his Zen background and training, was a huge hit with artists and educators.

Celio and his taxi are waiting for me at the Guatemala City airport as planned, on a late night in early March. He’s there as promised by Ricardo, the Payasos Sin Fronteras (Clowns Without Borders Spain) logistician who organized a twelve-day project in which I’ll teach five workshops and create a collaborative show with local clowns. My ultimate destination is Escuintla, where the Volcan de Fuego erupted last year. Celio whisks me off to the Hotel Panamerica, a stately downtown hotel. It’s certainly a step up from the cement floors I slept on with Desastrosus Cirkus, when we played the Bhutanese refugee camps back in ’97. Then again, I’m not sure if there even was a hotel in Damak, a town that the Lonely Planet Nepal guide only dedicated one paragraph to. Escuintla, a trucking town on the Transamerican highway, has plenty of hotels, and innumerable long-haul trucks rumbling through. It too is probably overlooked in the guide books––there isn’t a gringo in sight during my four days here.

Immediately after the 2018 eruption, Clowns Without Borders was invited on a performance tour for those displaced by the lava flow. We also did a number of workshops for the first responders, and teachers from those communities. My trip is a follow-up visit, as CWB received numerous requests to return with more workshops. Some of the workshops will take place in Guatemala City, first with Procuraderia Derechos Humanos (Provider of Human Rights), and then with local clowns. We’ll have a show-creation day with several of the clowns, after which Celio will drive me to Escuintla. There, I’ll offer several more days of workshops: one for health care workers and one for teachers. After that, the clowns come join me to perform two shows in the school, and one for the community. Of the 4,800 people left without homes (and community) by the eruption, 1,200 remain displaced.

Lucho, Sayda, Noemi and Stef formed the 2018 Guatemala team, so I had a long talk with Sayda before coming down. I quizzed her about the workshops they offered, trying to determine what I could offer that would be useful. “We played games (theater games, clown-based play) all day, and the participants absolutely loved it,” Sayda told me. I have no doubt the games offered needed opportunities to laugh together, to let off steam, tensions, and trauma due to the disaster. The lava flow ran right through a number of communities, completely decimating their homes, and perhaps more importantly, growing fields and livelihoods.

When I arrive at my first workshop with health care workers in Escuintla, certain tensions are palpable. I had encountered similar energies with the human rights workers (psychologists and social workers) in Guatemala City. They support clients facing every kind of abusive situation you might imagine. Listening to them in the opening circle, I had a strong wish to lighten their loads. I had an agenda: fun and funny trauma/stress release exercises, vulnerability affirmations, enjoying frustration, reactivity/response games and more. Ultimately, it made sense to come in not knowing, and hear what they wish to work on.

Before sending the talking stick around the circle in Escuintla, I offer a menu of possibilities for the day, and ask what resonates, what wishes do they have? To my great surprise, relaxation exercises (Feldenkreis based practices) are high on everyone’s list. When the talking stick comes back to me, I add another possibility: Zazen meditation. To my surprise, the response is quite enthusiastic; in fact, all five workshop groups are of the same mind: “Yes, please.”

I had hesitated to mention Zazen, figuring that meditation might be a little too far outside their comfort zone. Yet there it was, and so with rings from a small Burmese bell, sitting in straight-backed chairs, we meditate for short stretches, several times in each workshop. The practice is well received. I take it a bit further, introducing the possibility of three breath practices as a way to shift one’s state of being when one becomes aware of stress.

With the teachers, I wonder if they might try to bring that quiet into their classrooms. A video shared with me the day after our workshop suggests otherwise.  It’s a short clip of a teacher trying out the monster/victim exercise with his classroom. The practice, developed for a CWB Myanmar project, offers the kids a chance to have great fun reacting in playful/funny fear (enjoy being afraid!) to a supposed monster scaring them.

In the video, the teacher has taken on the monster role and the kids are fully enjoying his absurd monster-like attempts to scare them. They scream in playful fear, followed by collective gleeful laughter. Then as the students transform into monsters, switching roles according to the game’s design, their eyes fill with mischievous delight. As the posse turns on the teacher, the video suddenly cuts off! Uh oh! What kind of mischief did I instigate?

Only the nose knows.