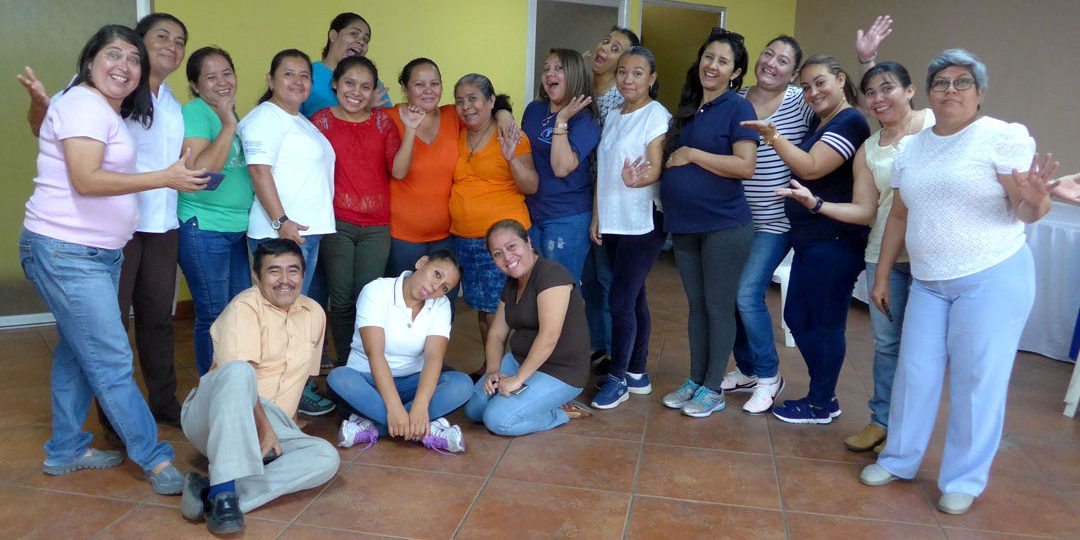 Clowns Without Borders USA founder Moshe Cohen is in Guatemala leading workshops for social workers, mental health professionals and educators. Moshe has a long history of clowning in Guatemala, starting in 1996! Today’s workshop is held in Guatemala City, and the participants are excited to try meditation. They specifically request tools for resilience.

“When I talk to Sandra after the workshop, to ask how it went, she tells me she has never seen some of the participants smile before, let alone laugh. I hadn’t considered that possibility earlier in the day, though I did note a few faces that were slow to thaw into humorous expression.”

Sandra, the coordinator from the Procuraduriá of Human Rights, is super happy with how today goes. The workshop starts quite formally, with the director and the head-of-staff each giving short speeches at a podium, with a microphone. A videographer records the event, but once that person disappears I waste no time in breaking down the rules of formality.

Perhaps inviting informality is the most revolutionary aspect of the workshop, though I doubt it. Waking up humorous expression and empathetic human connection is a surprising exploration for most of the participants. Most are willing, but as one might expect, there are more than a few who’re apprehensive. That being said, they all take on the challenge, plunging into exercises that demand a combination of fun and mindful concentration. This experience is a far cry from my colleagues over on the Balkan route right now, driving umpteen miles to small, forgotten refugee centers, performing and inviting laughter into places where it’s desperately needed to defuse despair and desolation. My first impulse is to discount the work I’m doing here as relatively unimportant.

Yet then I consider the “clients” of these psychologists and social workers. The workshop participants sit behind their desks (for the most part), receiving and interacting with victims of human rights abuses of all kinds. The director uses her short speech to remind everyone how isolated their Procuraduria is from most other government agencies; how they’re not very ‘popular’ with the establishment. In this country, with a long history of human rights abuses, these folks are often on the wrong side of the table in the government’s eyes (so to speak).

That thought brings up memories of the Zapatista conflict in Chiapas, Mexico, during their uprising. In St. Cristobal there were actually two human rights centers: the official government agency and the Centro Derechos St. Bartolomé de las Casas, run by the Catholic church. The people at St. Bartolomé were the only ones truly interested in human rights abuses, while their government counterpart was far less effective.

In the workshop today, I steer the group towards developing tools of expression to defuse tension in subtle ways. We work with energies of frustration and fear, and practice infusing those energies with lightness. It’s a way to better connect with clients. I’m a bit surprised when, during the opening circle, one person asks for tools of resilience—I hadn’t expected the participants to think a clown has anything to offer in that sector.

In fact, we do. Resilience is one’s ability to deal with difficult situations and emotions. It starts with an awareness and acceptance of those emotions, such as fear, frustration, and anger. The journey for a clown, or anyone really, is to inject humor and lightness into those feelings. Resilience requires just that, to accept that we all carry those emotions—unless perhaps you’re something of a saint, and even then, those emotions aren’t really outside or beyond you.

As we close the morning session, I ask the group what they want more of when we meet again in the afternoon. They request more relaxation exercises, more meditation, and how to work with frustration. I had teased that final option as a possibility, unsure if they’d be interested. The request for meditation is unexpected! I hadn’t planned on doing it, but when I mention it, there’s a surprising level of enthusiasm to try, and total agreement when I suggest it as the final exercise of the day. Yes, please. Well, I guess this old clown is still capable of learning new tricks.

Thank you to Ricardo Bámaca for the photos and the logistical support on this tour!