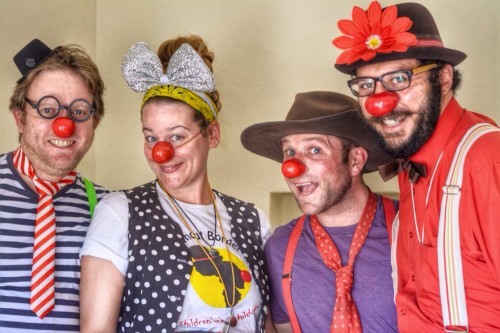 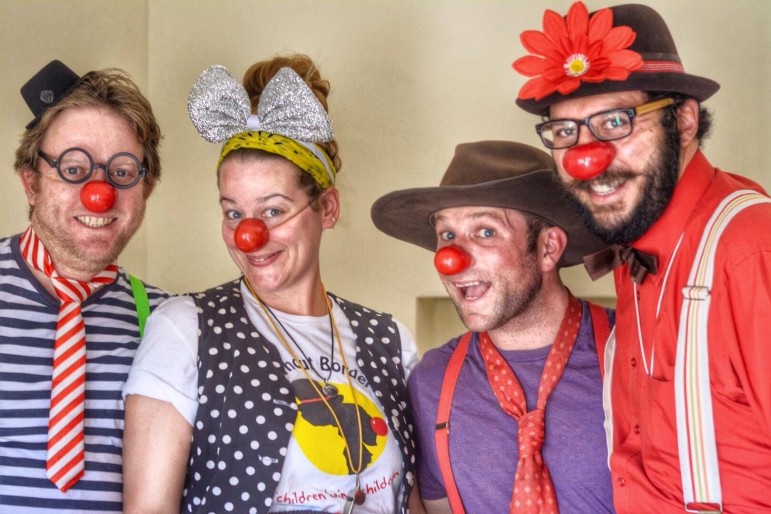 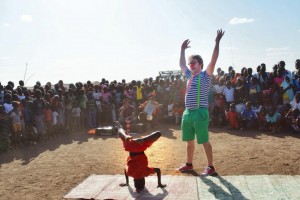 Gavin Stockden is from South Africa and on the board for the South Africa chapter of Clowns Without Borders. His voice is very loud and commanding compared to the soft spoken Kenyans and other Africans that we’ve met out here, he’s well spoken and you can tell he loves this kind of work. His dry sense of humor between conversations really balances out the seriousness and helps relieve ourselves in such a intense location. I’m really impressed with his huge knowledge of gags, bits, and skills that he brings to the group. 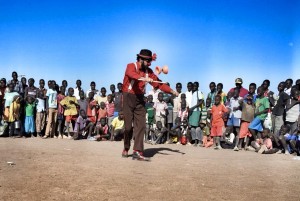 Andreas Aguilar: A very funny and sincere clown from Mexico City. We first met in New York at the airport and we started our friendship real quick. With 12 hours on the plane we had enough time to share stories and connect mutual friends from around the globe. He is a former Ringling Brothers Clown that toured with Blue Unit for 2 years. He left because he wanted to focus more on Hospital clowning in Mexico he stated his own group called “Risaterapia” which translates to Laughter Therapy. In the show Andreas is a talented Diabloist and Musician which really adds to the performance and from the start I’ve looked forward to working with him. 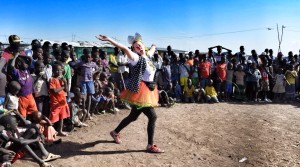 Erin Crites: A trained Comedia Del Arte Clown from Louisville Kentucky. She will be teaching Comedia in Los Angeles when she returns from Africa. She is the strong female leader our group to hold it all together, her musical talents and quick wittedness helps move the show along quite smoothly. I love her interactions with young females and hope they can be inspired by our lead female role in the show and take something home from it. She’s been such a sweetheart on and off the stage and has such a photogenic personality its hard not to take a good picture of her. 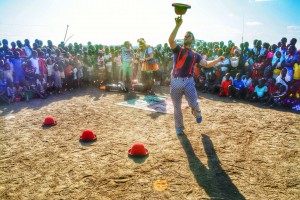 Geoffrey Marsh: is the author of this blog

We landed in Kakuma on Monday on Monday Aug 24 and it was not as hot as I expected it, there were a group of kids waiting on the other side of a barbed wire fence watching the new arrivals get off the plane. This was the first time in 25 years that entertainers have been invited to Kakuma. The group was immediately greeted by one of our contacts that that we have corresponding with for the weeks before we arrived.

At the landing strip there was an American that was teaching the locals about movie making and he asked me where I was from, we both made the connection that we had friends in common in the southern California area. He quickly gave me advice on the local scene, recommended I take a motorcycle taxi for 50 shillings and where I can find a good time on Saturday nights. 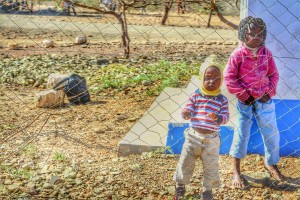 We jumped in a Toyota Land Cruiser with the Letters UN on the side, we told the driver we needed to find sim cards for our phones so we could get in touch with our friends and family while we were in town. Kakuma was not what I expected when we first arrived.  The first Kakuma marketplace we encountered was not what we expected. They had such a diverse range of people bustling though it Somali, Arabic, Congolese, South Sudanese and the local indigenous tribesmen and women, the Turkana. Perhaps there were 30-40 shops for whatever you would need all run down shanty shacks that provided anything from spare motorcycle/bicycle parts, mini markets that carried toiletries, beverages, and cell phones, to butchers, tailors and freed vegetables, fruits, cabbage. In the market we were approached by kids pointing to their bellies saying they they we hungry, most of them relentlessly asking for food or money. 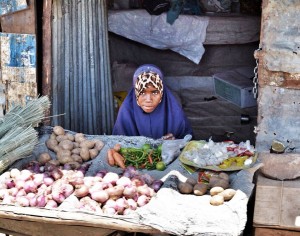 We quickly got what we needed from the market and drove to the UN compound to be shown our rooms. Once we arrived we learned that we were provided a modern 1-2 room apartment with AC, shower, and a demi kitchen and living space. It’s comfortable and the people who live in the compound are very nice. It’s convenient that everyone speaks english and there are workers here from all over the world, but mostly the States. 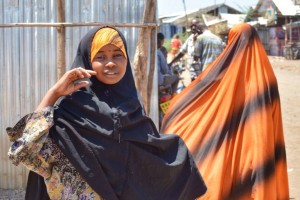 We’ve friended the resettlement crew which helps decide which refugees are resettled across the world. Most of them help we’ve met help refugees resettle in the United States. We learned that not everyone gets to leave Kakuma though. The people they interview sometimes lie about their situation to have a better chance of leaving and it’s hard to make the decision on who leaves and who stays. Everyone in the camp wishes to be re-settled, though there are no real requirements for re-settlement. They tend to focus on the ones whose lives would be more difficult if they were to stay in Kakuma; those with physical or mental disabilities, single mothers, homosexuals, and those who have lived and seen traumatic life before they made it to the camp, and ones who fear that they would be prosecuted or bullied for beliefs. I’m not sure the full extent on who all gets to leave Kakuma but it’s a topic I would like to explore more.