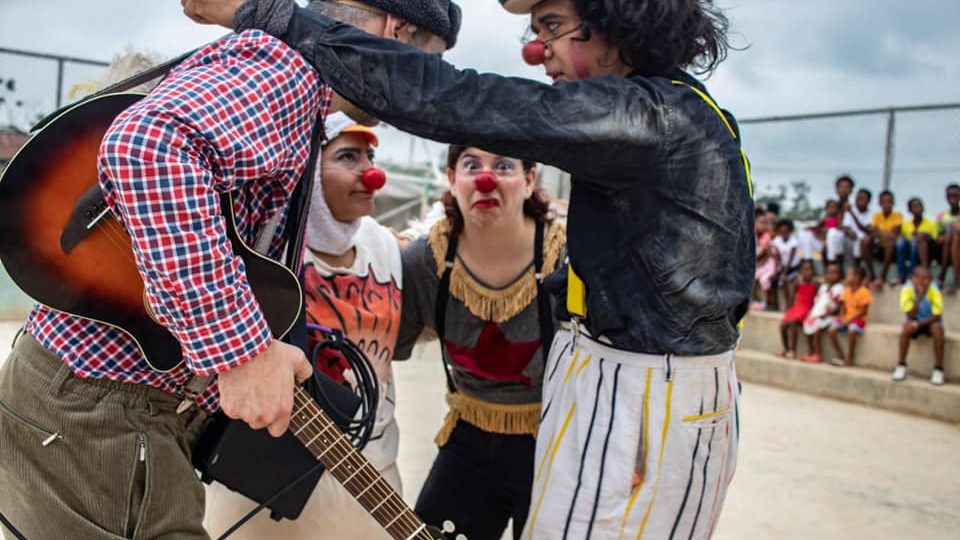 As millions of people flee Venezuela, the UNHCR has categorized the situation as an emergency. CWB – USA worked with Venezuelan migrants and their host communities in Ecuador. Josie Mae writes about the multi-layered power of circus.

The Storytelling Power of Circus

I arrive at our second show in Ecuador with an open heart and present mind. We’re in a Colombian neighborhood called Esmereldas, just outside of San Lorenzo. My goal for this show: to have no expectations and play in the moment.

As we leave the city center and approach the barrio, my fellow payas@s and I lean out the windows of the vehicle and shout to those in the streets, inviting everyone to come watch the show!

When we arrive, we’re met by an audience of 100 people. It’s mostly children seated on the cement bleachers of a small fútbol field, and much more intimate than our show the day before (500 school children in a enormous gymnasium). We warm up the crowd with some energizing games, magic tricks, blowing bubbles, smiling and giving high-5s. They’re apprehensive at first—one young boy is terrified, crying and screaming—but little by little they lean into our play. After an introduction from our partner organization, Servicio Jesuita a los Refugiados, we begin the show, The Story of the Migrant Hen!

We sing and dance and work together as a team, weaving our technical skills with with a potent message: migration is a human right. I’m reminded of clowning’s power as a storytelling vehicle.

The audience remains quiet during my juggling routine. I try to glance at their faces between tricks, but it’s hard to see. Insecurity kicks in: Am I boring them? Is my juggling good enough? Laughter isn’t the only emotion transmuted through circus. Awe, surprise, reflection, excitement, and inspiration are just as prevalent as joy and smiles.

Our music and noise draws in about 50 more people as we continue the show, and they crowd around the side of the fútbol field. I notice a middle-aged man in a white shirt who has just arrived, and he’s laughing from the tips of his toes to the top of his head. His smile remains even during the quieter moments of storytelling. It grounds me throughout the show. When I’m feeling lost and disconnected, I look to this man with his total presence in the spectacle, and I’m able to drop in deeper. Circus can transport someone from their reality into a world of levity, play, and imagination.

We finish up the show to much applause from the public and then take our places in the audience. A dozen local kids have prepared a dance to share. They stand in formation holding paper signs with words like “love,” “family,” “name,” “migration,” “home,” and “happiness.” They’re describing the rights of the child. They dance along to a song declaring their rights while I think about the vulnerability of the people we’re working with and the circumstances they’re in. I’m flooded with emotion while reflecting on the impact of clowning and my privilege to do this work.

The man in the white shirt approaches me after the show and introduces himself. His name is Stalin, and he thanks us over and over for coming. “It’s been a long time since we’ve laughed this hard,” he says. In turn, I thank him for being my beacon during the show.