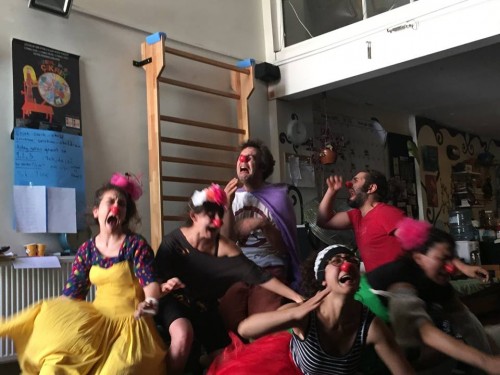 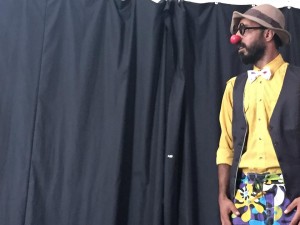 The azan began this morning ten minutes before five o’clock; a piercing tenor voice soared from the Minaret not more than four blocks from our home.  We slept in on the top floor of a six-story walkup building, windows and doors wide open as the mosquitos here are far more tolerable than the heat.  It sounds like the Muezzin is standing on our balcony giving the call to prayer.

This morning another voice, a baritone echoes the sacred words:  Ashhadu an la ilaha illa Allah.  Another Minaret, one that we cannot see sharing a harmony and dissonance, waking its own community and the day begins.  Two voices, in their own space and time repeating words that resound all day from Minaret to Minaret here in Istanbul, two voices that span the range of the male human voice.  Then you hear the loud “click” of the microphone, a reminder that amplified voice is the only one that is heard any more, that many Minarets now house speaker systems, not humans who have scaled the top to awaken the community.

Then silence, short-lived by the calamitous morning song of seagulls, crows, and whining cats that wail like hungry children.  Sarah and I sleep in the crowded community of Kadıköy.  We do not start sweating until seven in the morning when the rising sun casts a pink sheen on the Sea of Marmara. 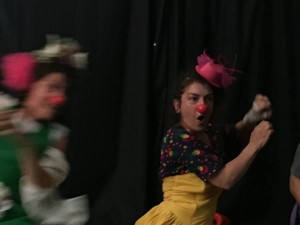 There have been a series of violent deaths reported in the country, which have stemmed from the bombing of a group of student activists who were gathering to plan the building of a playground in a city in northern Syria that was attacked by ISIS.  The city was defended by Kurdish militants and now, although demolished, it is ISIS free.  The students who met before a suicide bomber killed at least thirty of them, united to help rebuild the city, Kobane, starting with a playground for children.

The tension in Istanbul is palpable.  We’ve been told there are more religious ceremonies happening to honor Turkish soldiers who have died since the bombing of the students in Suruç.  Kurdish militants not associated with known Kurdish military groups who, since 2012, have been actively struggling for political change through non-violent actions, have now been blamed for the killing of Turkish soldiers after the Suruç bombing. The United States has recently agreed to assist Turkey in efforts to fight ISIS; however, these agreements have also led to airstrikes against Kurdish minority groups who have actually been some of the best at defending against the ISIS movement.  Everything is complicated. 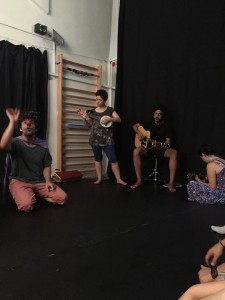 Our host, Güray, an inspiring actor and director, who is hopeful to found a Turkish chapter of Clowns Without Borders told Sarah and I that when we arrived that we had arrived at the best time and at the worst time.

Turkey is estimated to host at least 1.9 million refugees by the end of this year.  1.7 million of them will be from Syria.  Hundreds of thousands of asylum seekers from Afghanistan, Iraq and Iran also reside here.

For a week we have been workshopping a clown performance with sixteen clowns.  We have been learning Turkish and Kurdish; and most importantly, learning a corporeal shared language that pervades linguistic borders.  Our show is full of metaphors that range from invisible walls being broken down, lost friends, and families separated from dogs. 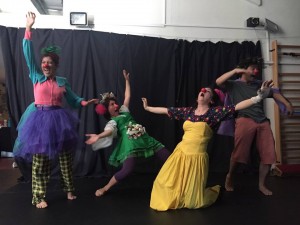 Some of our clown team has worked with Syrians who are now refugees living in Eastern Turkey.  They told us about how when they fled their homeland they took everything they could, including their pets.  At the border no pets were allowed to cross.  Families were forced, sometimes violently, to leave their furry loved ones behind.

CWB has been invited to work with Kurdish and refugee communities.  We have been asked by a group of energetic clowns to coach them in the work of sharing laughter in all settings, breaking the boundaries of theatre and hopefully bridging chasms between families and community that have been created by war, displacement, nationalism and structural violence.  The work of the clown in this context is to bring groups of people together inviting them to laugh and play with us for a short period of time, just that. 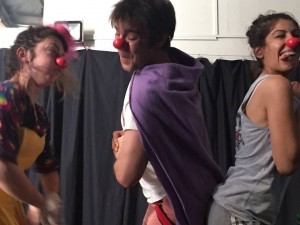 Our team has worked diligently during the past week to devise a show together, recognize and work through our own biases and misunderstandings about each other, and make an hour-long show.  We opened it last night to about 170 people in a small park in Istanbul—a trial run that went over smashingly.

Today our team will fly east and our shows begin on Monday.  We have already had cancellations and schedule changes; we know that our plans can and will change on a daily basis.  And we are as prepared as we can be. 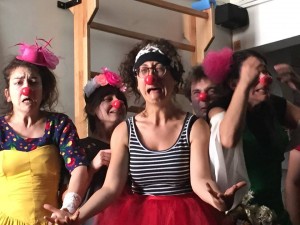