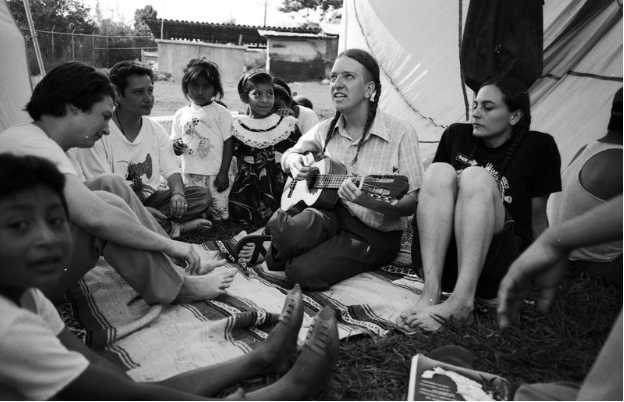 CWB – USA founder Moshe Cohen writes about a return trip to the Free and Sovereign State of Chiapas.

We leave Santa Fe, NM on Monday April 10th, pick up our documenter and musician (Jaime and Caroline) in Mexico City on Friday, and arrive in San Cristobal on Sunday the 16th. We’re pretty exhausted thanks to seven days crammed into “Honky” our new van, but also excited to start the more active part of our journey. We’re greeted and hosted by Daniel, a truly sweet and crazy revolutionary guy who works with the Cordinadura, among other NGOs.

Daniel meets us in the mid afternoon, wearing his bathrobe, while he tells us about our upcoming itinerary. We cook dinner in his bachelor/anarchist pad and set about preparing for the week to come. We spend Monday rehearsing in the courtyard of a nearby NGO called Junax, which will become our home-away-from-home.

Tuesday morning we set out for Tila, where we perform our first show on a playground for an audience of about 400 kids and adults. We’re hosted by Juan, a Chol man who works as a teacher in Palenque but who happens to be home for Semana Santa (Easter break). Juan is a serious karate man and a lover of the arts. The next day is spent leading a puppet-building workshop with about 30 kids, who make six beautiful giant puppets out of sheets, pillowcases, lots of paint and twined-together sticks. It’s new puppet technology that Robbie Pino, one of the co-founders of Wise Fool New Mexico, devised due to the lack of any kind of paper (for stuffing) or cardboard (for structure)!

That night, we’re treated to an actual karate training session (Yes! At 10pm, after a full day of kids!) in the tiny front room of Juan’s house. Much to the amusement of Juan’s wife and son, there we are on Passover: Seven tall and gangly gringas packed into a tiny cement room punching and kicking and push-upping to exhaustion, to the beat of bad techno flashback music. That’s certainly an image I’ll never forget, not to mention the music, which we sing in the van (Juan puts the tape on when we wake up and plays it until we go to sleep).

From Tila we head to Cantioch, a small community out a long dirt road, where we perform in the midday heat and sun—much to the dismay of ourselves and the 300 people watching, I’m sure. Nonetheless they love it, and we spend the afternoon trading songs, eating rice and beans, and talking politics with the local men. They’re a community just starting to become involved in the Zapatista civil society, and we’re sent off the next day after a group sing-a-long of the Zapatista hymn.

Off we go to Petalcingo, a larger town where we happen to perform on Good Friday. We postpone the show, waiting for church to let out, but it starts to get late. At first, our audience is mostly men and kids, but by the third act, church has let out and we’re literally surrounded by an audience over one thousand-strong. They’re packed in on all sides and quite enthralled with our show. It’s a little scary at the end when we’re mobbed by kids wanting to touch and grab and pull apart everything, including us!

Petalcingo feels really different, because it’s a split town and you can sense the hostile energy in the air. Since the 1994 revolution, and well before, an invisible wall exists between the Zapatista sympathizers and ruling-party supporters. They may live in the same small town, but they’re definitely not on speaking terms. And then, in the midst of it all, comes our favorite quote of the trip, overheard between two young boys watching us prep for the show: “Hey, they look like gringos.” “They’re not gringos, they’re clowns!”

Next we head to Tumbala, a beautiful mountaintop community where we fall in love with the kids and spend time painting faces and making friends before the show. We perform in a gorgeous churchyard, and although our crowd is shy at first, watching from a safe distance, they’re all inside the yard and completely involved by the end. The kids help us pack up and watch intently as we performed the “taking off your makeup” routine, and the “trying to change your clothes when people are peeking into every window of the van” skit (an all time favorite!). We have great video of the kids running beside the van, saying goodbye.