During CWB – USA’s recent tour to Tijuana, the team performed at the border as families waited in line to learn who would be granted asylum interviews. In this blog, team logistician Molly Rose writes about the difficult living situations and slim chances faced by asylum seekers, as well as the moments of joy.

Waiting to Hear Your Number

Our first show is at a small shelter in Zona Norte, near downtown Tijuana. It’s just a five-minute walk to the pedestrian border crossing, and the plaza where people gather every morning for la lista, the unofficial/official list asylum seekers use as they wait to plead their case for asylum.

Newly arrived asylum seekers register with the list to receive a number that allows them to begin the legal process of requesting asylum. Then, they wait in Tijuana for their number to be called—an average wait of three to four months. Legally, anyone who presents themselves at a point of entry has the right to ask for asylum and be immediately received for processing. In reality, the United States and Mexico border patrols created the list system to delay the process.

The physical notebook that holds the list is managed by the asylum seekers themselves, blurring the lines of culpability for the authorities. Each morning, the notebook is delivered to the “list managers,” along with the numbers of asylum seekers who will be accepted that day. Sometimes, a list manager hears their own number, and they pass the notebook along to someone else further down the line. After the numbers have all been called, the authorities take the notebook back for safekeeping overnight.

This tour is for the families who are on the list. A man shares his family’s story with me after our performance this morning. Rodrigo* watches our show with his small daughter in his lap. She’s too young to really understand what’s happening, but it’s clearly a pleasure for him to share the show with her. Rodrigo’s family has been in Tijuana for 22 days so far, and are about 120 numbers down on the list. They live in a cavernous, concrete warehouse, alongside 30 other people (though the numbers fluctuate as new people arrive and others take their turn on the list).

The lower level of the warehouse holds supplies and chairs used for meetings and organizing. There’s a makeshift kitchen, still under construction. Colorful couches are arranged in a small corner, near a window, to create a living room. A paper design, drawn by members of the community, decorates the wall above the couches. The main living area is accessed up a flight of outdoor stairs. Bathrooms with hot water have just been installed. Our show takes place on one side of the space, which is also used for eating and playing. The other side, separated by a tarp used as a door, is a dormitory where everyone sleeps. Bunk beds line the room and it feels like the most private space available. We only enter it to retrieve lost juggling balls and hoola hoops. 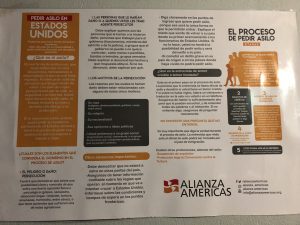 Rodrigo is grateful for a safe space with beds, and hot water for washing. He opens our conversation by saying (translation): “I didn’t make this journey for an ‘American Dream.’ I never wanted to leave my home, my country in Honduras. I’ve slept with my babies and my wife outside on the streets, in the cold, and I never wanted this for them. But there was no other choice.”

In Honduras, Rodrigo worked as a vendor with an elote cart, selling food in his city. The gang approached him and asked to use his cart to carry drugs and guns. When he said no, they told him that he had 24 hours to change his mind, or they would kill both of his children in front of him. “The gangs don’t make threats that they don’t intend to keep,” Rodrigo says. That day he and his wife decided to leave, and started walking to the United States. It wasn’t an easy decision, but the alternative, having his children murdered, made it the only possible choice. He worries about his parents and siblings in Honduras.

Sitting on plastic chairs in a dusty warehouse, he seems relaxed. His child is happy, giggling and pointing at the colorful characters in front of her. His older child runs around, wrapped up in the games that the clowns are leading, playing ring toss with plungers (props!). Rodrigo thanks us for sharing this time with them, but honestly, it feels like the very least we can do. We left with a hug and ojala que nos vemos al otro lado [de la frontera].

*names and some details changed to protect Rodrigo and his family