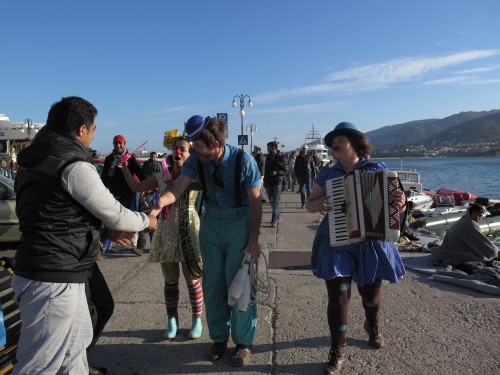 “Today while performing in the UNHCR waiting area of one of the camps, a 10 year old kid was enjoying the show until he heard the sound of a helicopter. By pure coincidence, I was looking at him at that specific moment.
His world collapsed, his smile turned into extreme fear, he looked at the sky then in no time put his and the two other kids’ heads on the floor and shouted, “an airplane an airplane -hide hide!” But the other kids didn’t understand why he was acting this way and they did not obey…
That terrified him even more. He was shivering so much. I’m not sure if he knew the other kids or just felt responsible for the ones next to him at that specific moment. But what I am sure of, is that this kid saw all the airplanes that once flew over his house in Syria in one fraction of a second. At that specific moment I couldn’t help myself from crying. I went and hugged him, the helicopter left. We continued the show and he smiled again…
I hope it will be long before he hears such sounds again.”
– Sabine Choucair, CWB Artist

“One of the volunteers doing aid work on the island said
that for the first time since arriving in Lesvos she cried out of happiness after seeing a show for the refugees. She has cried plenty since arriving, but never from joy until now. Huge thank you’s from the clowns to all of the aid workers and volunteers doing great work. You make it possible for us to do our work!”
– Molly Rose Levine, CWB Logistician

“We were on a “Clown Pit Stop” on the side walk of the harbor – there was this guy wearing a pink google shirt – he made a joke in Arabic that I didn’t really get but everybody in the crowd roared laughing; I thought this guy must be even funnier than us clowns so I invited him to take my place 🙂

His first comment was, ” Well, my dad is dead, he was burnt from head to toe and I almost died last night in the sea, so I might as well have some fun now.”
Clay Mazing lasso’ed him and hugged him tight. Luz Gaxiola played amazing music while some bubbles were flying in the air. It was a beautiful moment for him and us. I feel so humbled to have taken part in this magical, hopeful, clown moment.”
– Sabine Choucair, CWB Artist 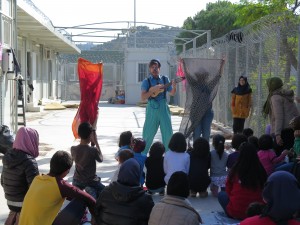 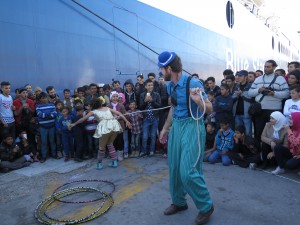