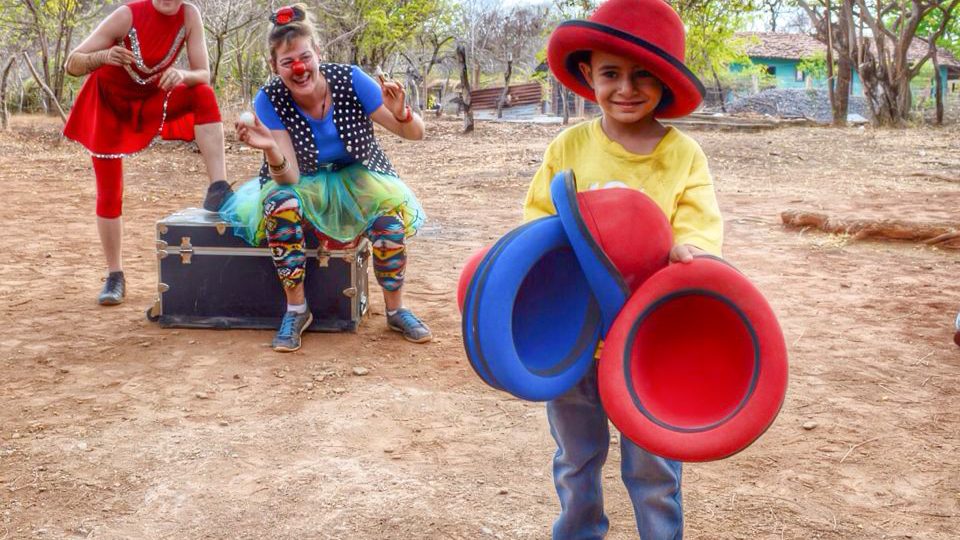 We all met on a windy day in Managua. The wind blew strong there, coming in off the metallic smelling lake, down from the volcano Momotombo. Flying into the city the plane passed over the top of a smoking volcano, flew over a massive statue of the silhouette of Sandino, and landed in a series of bumps in the fierce wind. The wind blew hard every day that we were in Managua. 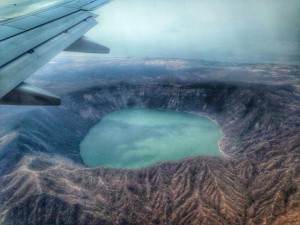 The second day, we rehearsed under a mango tree in the courtyard. Later, we moved into a room that opened onto the street, and the neighborhood kids watched as we crafted the show. They would become our regulars, as we came and went from the “office” every day. They followed us, and did bits from our show, tossing shaking hands at us and singing “Zoom galle galle” as we passed by.

At night in Managua, everyone would sit out in plastic lawn chairs in front of their houses and feel the wind. The water was turned off for most of the day, but they turned it on at night, and in the shower for a couple of moments, you could experience a release from the oppressive heat.

We had seen where he lives on our first day in Managua. He lived in the house he had always lived in, in a typical neighborhood of Managua, except that a large fence had been built all around the perimeter, and there were police guards everywhere.

The politics of Nicaragua, and the people’s relationship to their government fascinated me. As our coordinator said, “All governments steal from the people. The difference with this party is that when they steal, they give a little back.” He was a Sandinista.

As a brief observer, I could see some signs of this. The majority of the people live with hardly any material property in 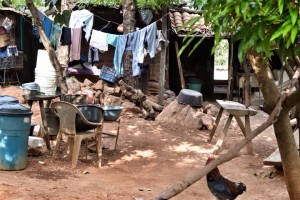 Nicaragua: Bare concrete structures if they are fortunate, dirt floors, open windows, and limited access to water. However, there was evidence of the FSLN party reaching out to the people, at least in small ways. They had fixed up all the parks at the center of each barrio, redone them, painted them with bright colors, and installed free wifi for the people, who rarely had access to the internet in their homes. While we were shocked at the fact that the neighborhood pre-schools had ratios of forty children to one teacher, on the other hand, it was pre-school provided free as part of a public education program, which we do not have in the United States. At the same time, the pre-schools did not have functional lights in the classrooms until a group of Canadians installed them.

There was something in the relationship of the people to their government in Nicaragua that intrigued me. There seemed to be more of a sense of investment, possibly of ownership, than in other countries I have visited, including the United States. Government and politicians are in many places perceived to be removed from the citizens who make up the nation, almost separate entities. Was it a merely a feeling that the people had high expectations of their government? Perhaps this is something that is particular to places that have been through the people’s revolution, the echoes of this sense of investment.

I should add that this is something I am still trying to pinpoint, an observation I am still trying to define for myself, based on a brief time spent in the country, and working closely with people who were actively involved in community organizing, in the capital city, which colored my experience. 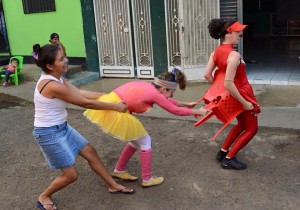 My experiences should not suggest that the majority of the people are content with their politicians and the job the government is doing. It is merely to suggest that having been through a revolution, the people may have higher expectations of what their government should do for them. It may be like what our friend said, all governments steal from the people, but this one does give a little something back.