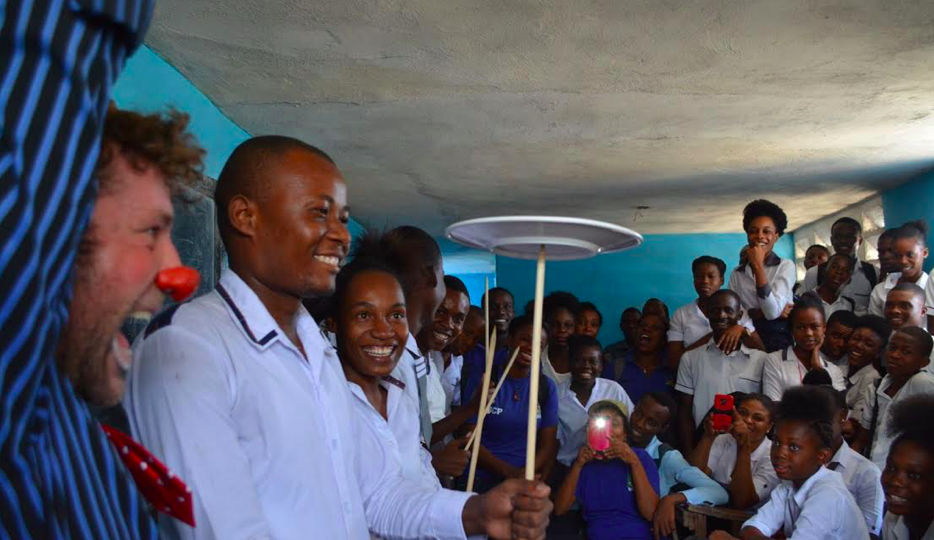 Kaitlin Kauffman, Geoff Marsh and Naomi Shafer are currently on tour in Haiti. For this special trip, Clowns Without Borders – USA has partnered with Médecins Sans Frontières-France (MSF-France) and is performing in hospitals and leading workshops for hospital staff.

Our first week in Haiti is in partnership with Médecins Sans Frontières-France. In addition to performances, we’re also giving workshops for the staff. After meeting in the airport, we started the raucous (and somewhat rushed) process of getting to know each other, putting together a performance, and creating a workshop.

On Monday, after receiving a tour of the hospital, we were eager to perform…and nervous. In hospitals, we have to be especially aware so that we don’t accidentally hurt anyone (or give the impression that we will accidentally knock into something). If a prop touches the floor, it cannot touch a patient. If a clown (or prop) touches a patient, it cannot touch another patient. Patients are often waiting to be seen by a doctor or receive medication, so, naturally, their attention is often pulled elsewhere. Our first two performances received modest laughter—but not at the places we had expected. Some of it was our own lack of familiarity with the show and each other. We were each focusing on “What Comes Next” instead of “What Is Happening Now.” After two performances, we led a workshop for the staff. It was a relief to be boisterous after a day of carefully performing for fragile children.

Against all odds, our final show of the day was the best. The head psychologist asked if we would perform for two patients in isolation. We checked in with each other: Were we up for it? The isolation unit came with a new set of regulations – we would need to wash ourselves and our props, keep a distance from the patients, and wear booties. We made a game plan and scrubbed in.

The room was nothing like I had expected. Though it is intensive care, it was barren compared to any medical office in the U.S. There was no buzz of monitors or beeping machines. Two patients—both burn victims, a woman and a child—lay in their beds. Both had burns over more than 40 percent of their bodies. A friend sat with the adult. The child was alone. Both were covered in bandages, and the skin that was visible was scarred and new. Burns are common in Haiti. These patients had both been injured in (separate) propane explosions in their homes. Burn patients are especially susceptible to outside disease, because they have no skin. Due to this vulnerability, anyone who approached had to follow a strict hygiene policy.

Sometimes clowning is at its best with limitation. Often, we set these for ourselves, building a character around an inability to walk in a straight line, or limiting ourselves to a vocabulary of nonsense words. In the isolation unit, the limits were external. There were red lines on the floor, marking the area where we could walk (without wearing gowns and masks). We were on one side, the patients on the other. That line forced us to look at each other, to make space for each other, and to commit to our actions.

When we entered the room, both patients brightened a little. The child waved to us, an action that (we were later told) must have caused him pain. In addition to the patients and the visitor, we were also joined by two psychologists, a nurse, and a medical technetium, all on our side of the red line. We opened with a song, and hoped to shift the balance of the room so the patients could be the spectators instead of the inspected. 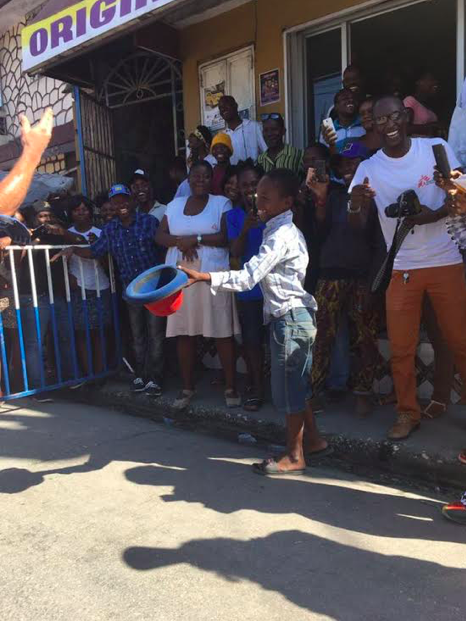 Kaitlin’s bubble act was especially sweet in such a small environment, as the bubbles crossed over the line connecting us to our audience (we had been assured that this was okay). Geoff juggled, and Kaitlin and I played a game with my clown stethoscope, which has a flower at the end. Our entire show was 12 minutes, so as not to tire out the patients. There was no applause, no loud laughter, no audience member joining us on stage—none of the usual characteristics of a CWB performance. Appreciation was shown in miniscule gestures, like a flickering smile, a small wave, a collective sigh.