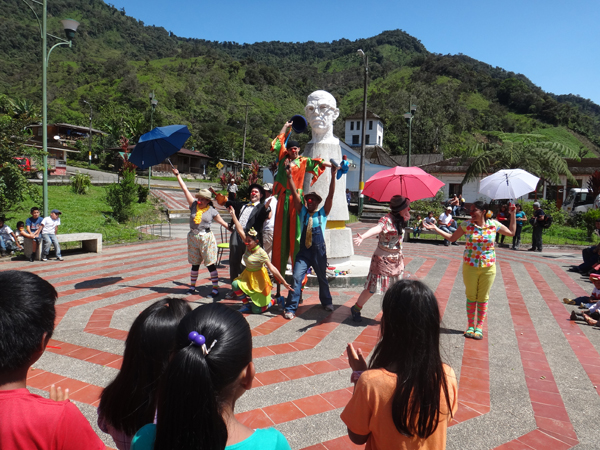 Tim and I arrived in Guayaquil a little over a week ago.  The following two days were spent in a studio clowning around, singing, laughing, sharing our strengths and weaknesses as clowns, which Tim called “las cosas flacas y las cosas fuertes”  in his Payaso Spanish.  The goal for the two days was to create an ensemble clown show.  We did that.  A collaboration among seven clowns: Tim and I from Clowns Without Borders USA and Ale, Chechi, David, Juan Carlos and Mirella from Narices Rojas Ecuador.  Tim had led a training for them before and they were super excited and ready to create and play with us. Our show is a combination of ensemble play, clown duo classics like The Newspaper and The Map, sprinkled with solo bits like the sneezing/disappearing handkerchief and the paper bag, along with some song and dance.  The show keeps its structure but inevitably changes every time we do it, the most essential elements of our play are the place and the people — this is is a magical experience, seeing, listening and letting things take its course.

We kick-started our tour with a show in historical  Las Peñas in Guayaquil, the oldest part of the city, behind us the water, El Rio Guaya and to our left the colorful hill of brightly painted homes.  We performed on a cobblestone street which is closed to most traffic, but we did get a few cars which provided us with great play opportunities, it was a perfect first show, with a fun, generous and receptive audience.

We then headed for the Ecuador/Colombia border.  The last five days we covered a lot of ground, traveling from village to village, at times 100 meters from Colombia. Only a river and a bridge dividing the two countries, people come and go between the two.  We performed for hundreds of children.  Many of them have refugee status, and endure many hardships on a daily basis but their spirit is not broken, they have will and joy and in the time we share together during the show we are all one, we breathe and we laugh together.

During the show I do the paper bag bit which Rudi Galindo taught me a few years back.  After the show the kids come and gather around anxious to know what’s in the bag and how do I do it and can I show them again.  I do. In Maldonado one kid took the invisible gift from the bag and he put it in his pocket and he said “I’m gonna keep it there forever.”

Why I do this work

My last trip with CWB was 3 years ago to Guatemala.  Since then I’ve done a lot of other work including most recently three and half months in Palestine working with The Freedom Theatre.  Coming back to do this CWB expedition has been amazing.  And also an opportunity to reflect on my purpose.  I struggled initially with going into a town connecting with a community over the course of a day and more intensely over the hour that our show lasts and then pack and go.  This came up in one of the debrief meetings, which we have everyday at the end of the day, in these circles we check-in and we process the happenings of the day.  Tim said, ‘being here is enough’.  And I think I know what he means.  There is something very powerful in the ritual of the journey and arriving and meeting each other, acknowledging each other, and laughing together.  The rest is out of our hands and we have to trust and go on.

Here is a map of the regions we visited while on this 5-day tour.  Over 2000 km logged, journeys from the coast to la seirra and through the Andes back to our temporary home in Guayaquil. The four blue “X’s” mark our journey.

Today, 100 meters from a FARC camp and less than 20 meters from the Columbia/Ecuador border laughter filled the streets of the small community of Chical. This is day 3 of a 5-day tour to refugee communities within Ecuador. From the hot coasts of Esmeraldas to the deep cool forests of Lita, we have in a short amount of time transversed climates and cultures. Though the heritages have changed of the children we’ve performed for the laughter has remained the same. Our first two shows on the road were for communities of mostly African descent our third show today was for children who have escaped, with their families, violence in Colombia.