When I got in the Uber four days ago, my brand new red Converse were still untied. I was rushing as I often do. In the car, the radio played Toto’s “Africa.” You know, that catchy tune from 1982 about a continent many refer to as a country? (There are 54 countries in Africa). While Toto was busy blessing the rains down in Africa, my head was down as I tied my shoes and bit my tongue. Though that song sold millions of copies and its chorus gets stuck in your head for hours, its message is disturbing. It paints a general picture of suffering that highlights a common narrative about an immensely diverse continent. We are told that “Africans are poor, they are sick and they need to be saved.” When epidemics strike, like the recent Ebola epidemic that occurred from December 2013-March 2016 in West Africa (primarily Sierra Leone, Guinea and Liberia), the media condemned the whole continent. Headlines like “Ebola in Africa,” “Famine in Africa,” “Malaria in Africa” are not untrue, but they are misleading, generalizing and most unfortunately, they are othering.
Is that song still stuck in your head?
“Othering” causes distancing; it allows us to disassociate, or “unrelated” from people, communities and those with differing points of view.  By separating ourselves from the “others,” we become much less tuned into the world around us. “Othering” is easy though. It feels safe. It is a very human reaction. It is also dangerous.
Taking my mind off of Toto’s tune, I perseverated on what I had packed, afraid that I had forgotten something important. I thought about my clown gear, the people that had given me elements of it and those who had inspired me to take this trip. I had juggling clubs gifted from Sam Lee, rubber chickens from Sarah Foster, squeaker toys from B.B. Widdop, Jamie Lachman’s antique horn, George Lennox’s 1970’s ruffled tuxedo shirt, David Lichtenstein’s nose, and a head full of clown routines I had learned from friends and mentors–Rudi, Moshe, Esther, Hilary, Pops and Peppe, to name a few. My clown character had become a compilation of gifts from extraordinary people. They all flashed through my head as that godforsaken song stopped. I was on my way to the airport, to fly to Sierra Leone, meet up with Eva and Malin, create a show and perform for street children and families affected by the Ebola epidemic.
This is my second time in Sierra Leone, the first was during that epidemic that took more than 11,000 lives and once again stigmatized a continent. Then, I was a nurse treating children with Ebola. Now I am a clown, treating no one, just playing. Then, the rule of law was ABC: Avoid Body Contact. Now, once again clinics, mosques, churches and markets are open, you are allowed to hold hands, hug, congregate and interact normally, like humans. Now the sounds of car horns overpower the then eerie drone of ambulances 24 hours a day. Now we can safely share a plate of “chop,” communal meals of fish, groundnut sauce and rice. Music, once again, is everywhere. 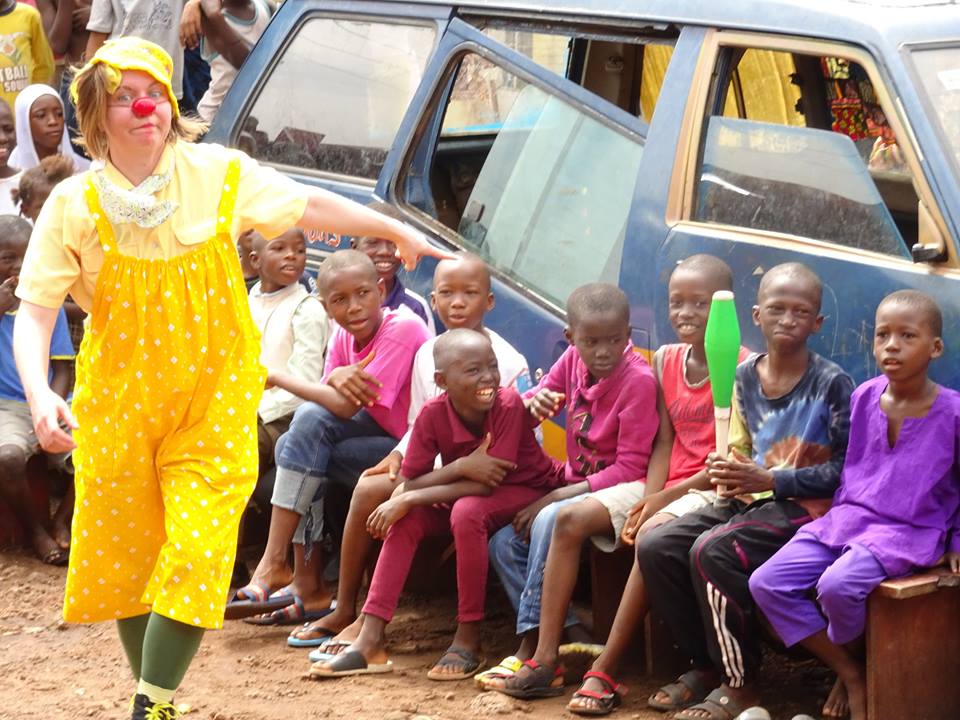 I am here with Malin, an old friend of mine, and Eva, a musician, both from Sweden. Our base is Lotte Elfe School in Portee, where we built our show. It will also be our base for teaching music and clown workshops. It is from there that we travel to put on shows. Cars cannot drive to where we work without getting stuck or destroying their undercarriage because of the rocks, mud and holes. Our team carries our entire show with us in suitcases and backpacks. Usually we share the load, except for when we are in character and Malin’s clown, “Apple,” is tasked with schlepping all the gear while Eva and I warm up the audience with a song. Eva plays the Quattro and I, my banjolele, while Malin’s clown struggles with chaotic finesse to set up our stage.
For our first show, the stage was in a ruddy intersection, its backdrop, an electric blue passenger van with dilapidated windows and a yellow racing stripe. More than 100 people waited for us in the Sunday morning sun. As the show ensued the crowd doubled in size. Children in bright colored formal clothes and men in white tunics cheered us on while we introduced each character with eccentric dance moves in our oversized outfits. An elderly woman in a maroon and purple dress, a complex lappa design resembling lightening bolts and cracked ice with a pristine matching hat, stood in the front of the crowd singing with us as if she knew the words to all of our songs. A man in nothing but shorts came out of his home—perhaps he had just woken from a long Saturday night—he scrutinized our magic tricks and tried to explain them to other audience members. The crowd clapped and cheered, mesmerized by the duet played by Eva and I on the flute and musical saw, and always ready to cheer on Malin as her clown, the “number three” character (think Groucho Marx), stole the show.
Early on in the show we play a routine in which we fight over who gets to read a newspaper. The fight builds in ridiculousness, tempo and intensity to the point at which the newspaper rips and we turn the now halved paper into a pair of binoculars. We look into the audience, like children having completely forgotten about our argument and we are immediately distracted by who we see in the crowd. We see a child and we go to shake his hand. Each clown wants to give the best handshake and so the three of us end up running circles in front of the child taking our turn to give the funniest, most formal or most ridiculous shake. We invite him on our stage then and do a routine in which, while holding his hands, we try to figure out how we can all bow together. 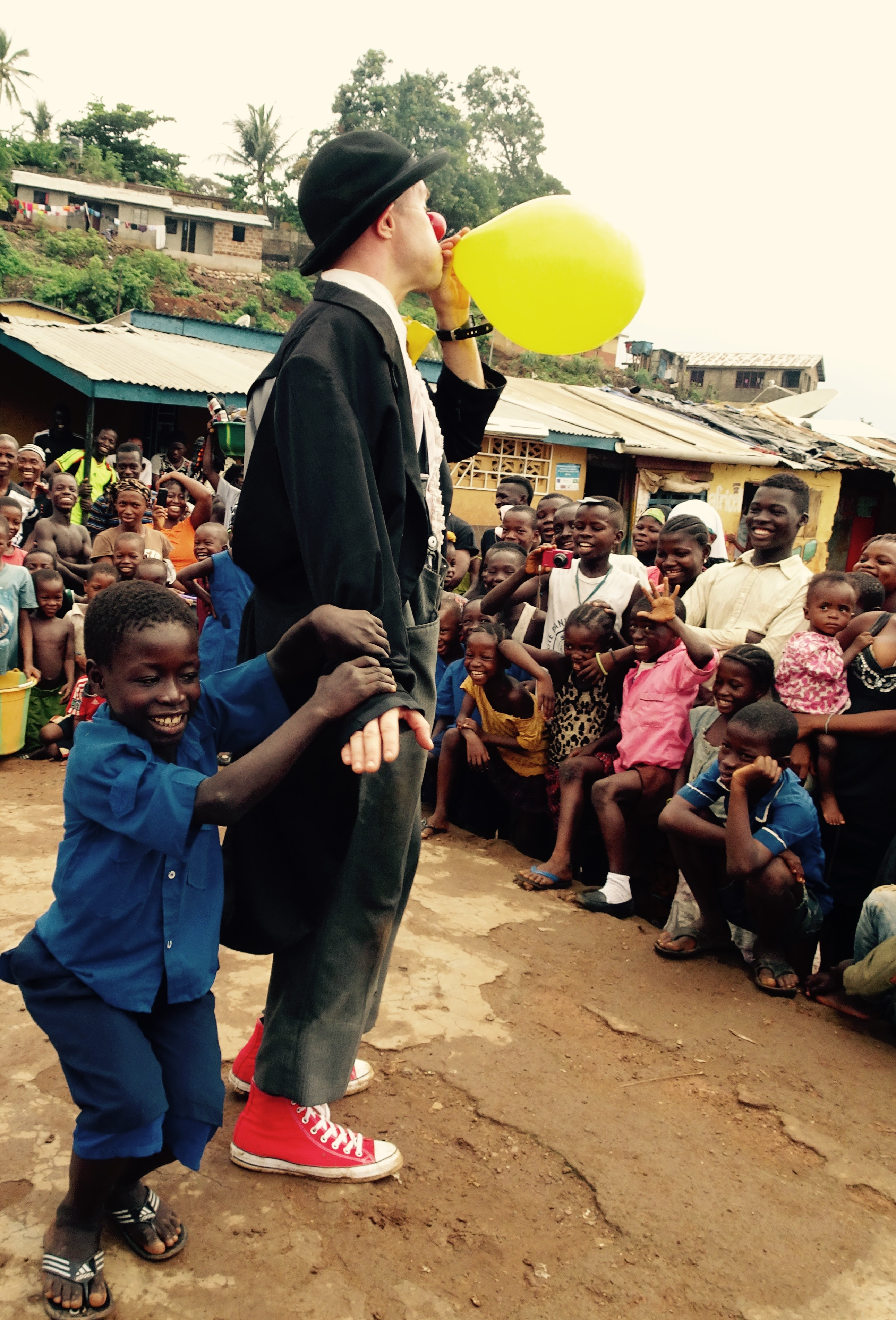 The child we picked in our first show was thrilled to be the center of attention. He grasped our hands laughing while Malin and I tried to figure out to make us all three face forward (photo). I’ve done this routine hundreds of times in at least 10 different countries; it gets similar laughs for its simple absurdity. But this time on this day it was particularly powerful. I realized that there in my red nose and black tuxedo that I could hold a hand with no fear of contagion. There was no risk that this child or anyone that I shook hands with would infect me with anything more than a sense of friendship. I still carry the trauma of holding the hands of the dead and dying in this country not long ago. Covered in latex gloves and Tyvek suits, we sat with countless people, each sick, each with a unique story and name, cut short. But then, with that child, I realized all of that was over. With a tear in my eye, I wondered what it was like when the ABC rule was lifted in Sierra Leone and the fear of contact dissipated.
The show was a hit. Most of the crowd followed us back to the school from where we started it all. At the entrance of the school three of us sweaty, dirty and happily exhausted said, “goodbye.” We rested for about two hours and then climbed to the roof of the building to host a music and clown workshop for about 55 children. 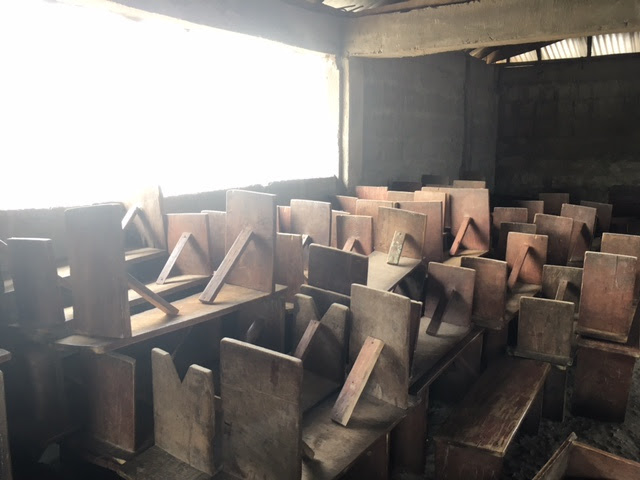 Eva took the lead on the workshop after I opened with a short warm-up call and response song called “Flea.” She taught a group of 55 fourth graders a song that she had written in Krio. It is a sweet tune that requires each child in the group to say their name. One at a time, a child speaks and then the whole group sings the chorus featuring that child’s name. We stood in a circle and each child’s name resonated through the group, survivors of Ebola, survivors of living in the streets, and survivors of the world’s indifference, these children, each child, had a unique chance to shine.
Our contribution is small, we would say “small small” in Krio. But what we can do and what we strive to do with Clowns Without Borders is to elevate the child, the individual child, to learn a part of her story and share it. As individuals we all desire, in one way or another, for our name to be sung in a song’s chorus. And too, that we are all a compilation of individual gifts and inspirations, that when our name is celebrated, we are actually celebrating a much larger whole.
Our show ended as so many of our shows have, in which we invite a child to come on stage and dance with us. A young boy joined us and mimicked the pose of a circus side-show “strong man.” He flexed his muscles over and over again.  He then climbed to my shoulders and stood there, flexed one more time and cheered. He was the tallest and strongest person in town.