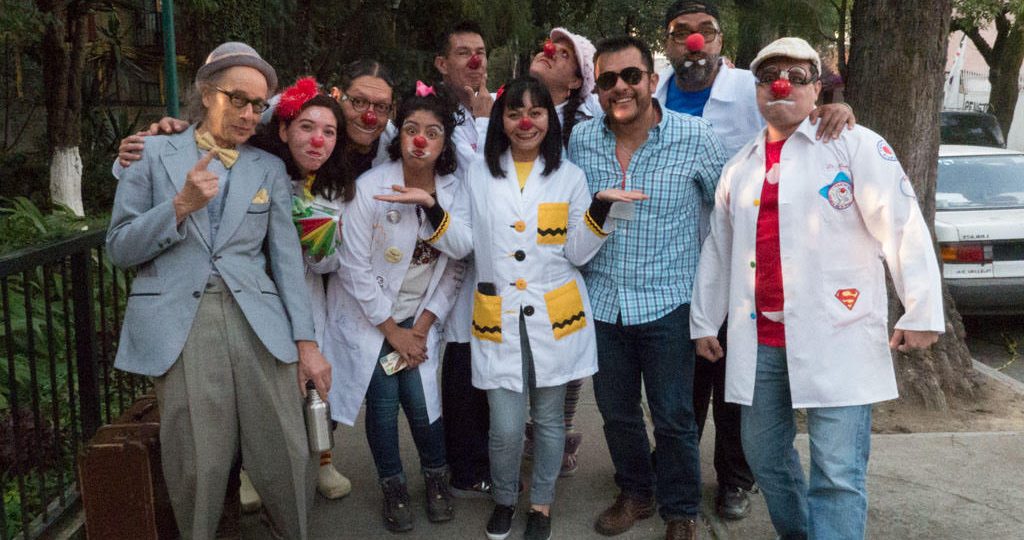 The Laughter Brigade’s goal is to offer moments of levity, especially for those who have lost their homes in Mexico’s recent onslaught of earthquakes and aftershocks. Moshe Cohen reports from the road, during his informal CWB partnership with the 5th Encuentro Internacional de Clown, and a group of Mexican performers. The initiative is called the Brigades de Risa, or The Laughter Brigade.

Several little streets are blocked off in the Tlalpan neighborhood of Mexico City, as we approach the albergue [shelter] for Sharon’s 13th birthday party. Numerous rows of apartment buildings are bathed in yellow caution tape and various small encampments of tents populate the open spaces. The main settlement is in the small park where the birthday celebration is taking place. Word about the celebration has gotten out via the red [internet], and several picnic tables are loaded with donated cakes and cupcakes and various treats. The trauma from the seismo [earthquake] on September 19 has been mostly hidden from view, and now a clearer picture is forming.

Beyond the courtyard, between two apartment blocks and past the yellow caution tape, I can see piles of rubble and a collapsed building. A huge banner at least 30 feet long and 10 feet wide hangs from one of the buildings, with the photos and names of the victims of the earthquake in that small corner of the world. It’s quite a shock to see normal life happening all around the small park, just not here. The outpouring of support for Sharon, whose family lost their home, who herself beat cancer three years ago, is a testimony to the solidarity following the seismo. 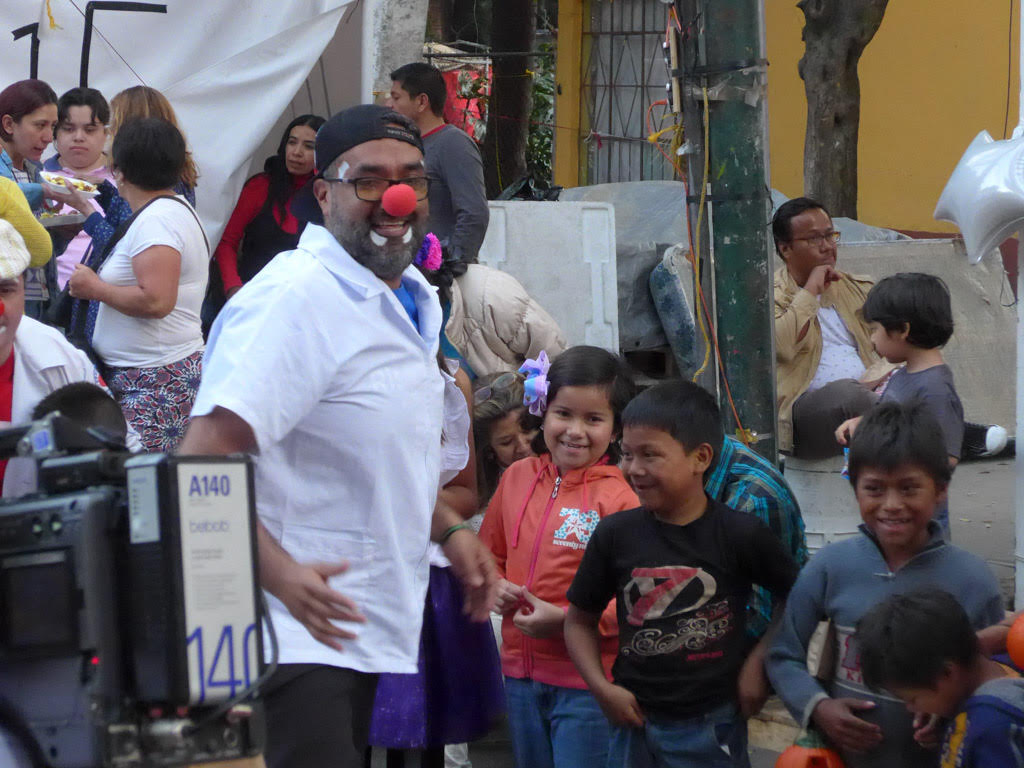 This is the first show of an informal collaboration between Clowns Without Borders and the Encuentro International de Clown–Mexico. On this occasion, eight clowns from the volunteer hospital clown program Risatherapia have joined me to offer a show for the celebration. As it’s only a few days away from Halloween and the Day of the Dead, many of the kids are in costume, and some are dressed as skeletons. A few of the girls have been face-painted as St. Catherina, the traditional death mask for the holiday celebrations. We are surprised to find that our scheduled performance has been pushed back by a group of clowns in full costume who are offering a show with lots of talking on the microphone, jokes and a bit of juggling. They are followed by a small puppet show, and finally it’s our turn. The previous shows’ dynamics had the kids sitting down and absorbing, so the Risatherapia clowns bring the kids into a circle to play games, and the energy starts to move a bit. My Mister YooWho goes with the flow and does an informal kind of street show. The kids are engaged, and the adults abandon their conversations to join in the fun. It gets rather lively, and the laughs open up. 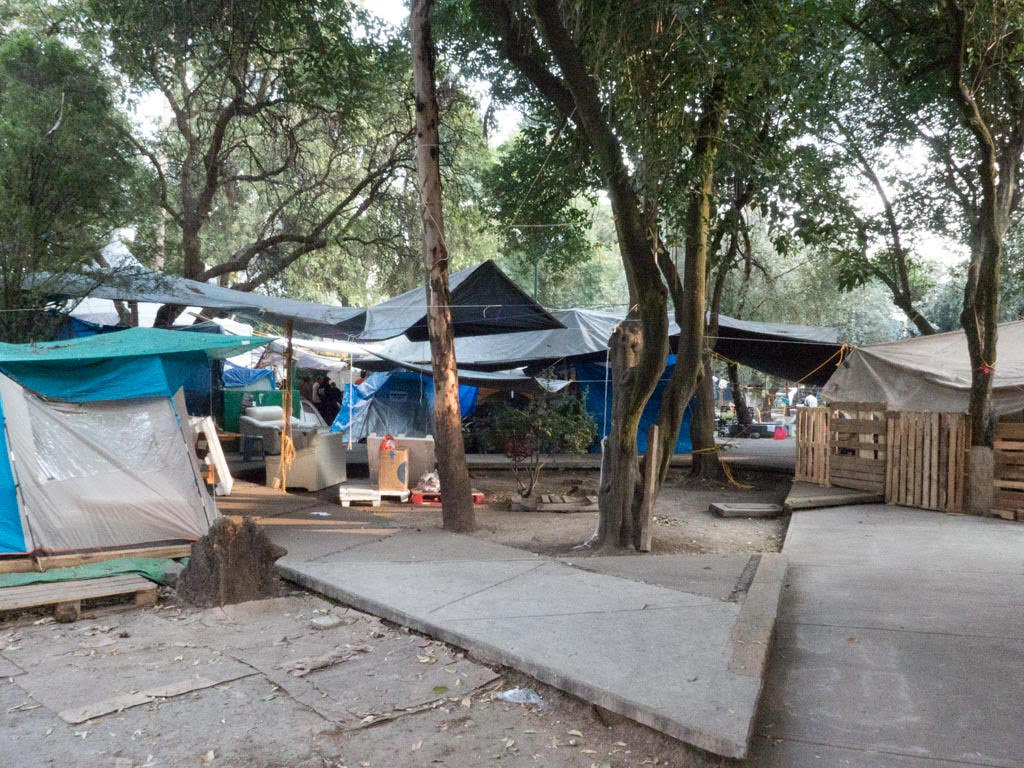 Sharon, however, who was costumed in a wedding dress has disappeared. As we wait, we saw her leaving in tears, though we’re not sure why. She reappears after YooWho is done, when the Risatherapia has re-engaged the kids in games. Sharon has switched costumes, and is now a pirate, and seems a lot better. I go to her, still in YooWho world, and do a bit of sponge ball magic. She is laughing and enjoying the moment, emotion is in the air—there is a strong heart connection and expressions of gratitude on both sides. There is strength in the quietness of her voice and softness in her eyes. I disappear a small bell for her mother, who laughs as I sneeze it out my nose. Yet leaving them arm in arm is poignant. What must this reality feel like? To contemplate waking up in a tent the next morning, knowing that the celebration is coming to a close and that the music and lights will die down.

The solidarity and support are real, and so are the tents. The small gestures must mean so much. It’s the organizaciones civiles who are working hard to help these people reconstruct their lives, organizations of citizens that have come together. What one might think of as a small thing is truly meaningful: Finding pallets to place the tents onto, as protection from the rain; a butcher who donates a whole ham for the party resulting in a line of folks waiting to taste the tacos al pastor. I walk through the tent village and we find a large gathering of people under a tarp strung between groups of tents. It’s a common meeting area, and a meeting is just breaking up. A woman is speaking, reminding the people of a number of resources that they can contact. No doubt it will be a long journey before people are able to return to a sense of normality. Nearby, a mobile kitchen/dining room trailer is parked, and the tables are full of people eating. As servers bring out the food, one gets the feeling that the albergue isn’t going away anytime soon. Driving out of the area feels like entering another world. back into another world. As the van  travels down a big boulevard with modern buildings, restaurants and some upscale shopping, one can only wonder.

This blog has been lightly edited for length and clarity. Read the original post here.