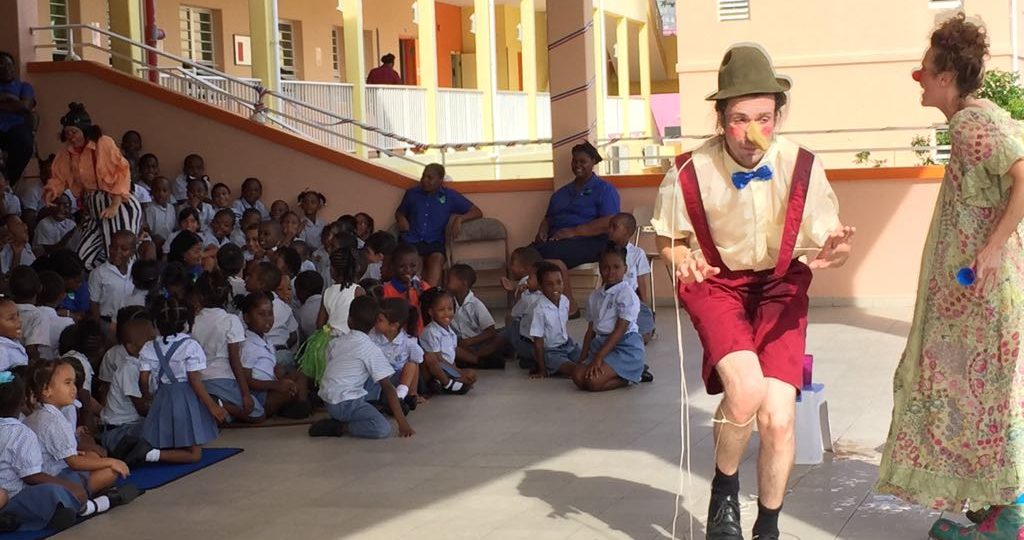 CWB – USA’s final project of 2017 is a joint effort among colleagues from the USA, UK and Brazil chapters. Four clowns travel to the island of St. Maarten, which was devastated by Hurricane Irma. CWB – USA clown Alex O’Brien Feldman talks about magical interactions between clowns and community members.

A Goofy Smile and a Red Nose

We don’t restrict smile-spreading to our shows. After we perform, Ivan invites interested kids to handle the acrylic ‘water balls’ that he juggles. They’re eager to see what the balls are really like, since they appear out of a bowl of water and look almost like soap bubbles. Marina plays a very mischievous clown. She gives hugs to as many kids as she can after each performance. Gabi often sings after the show, and is known to hug strangers on the street. 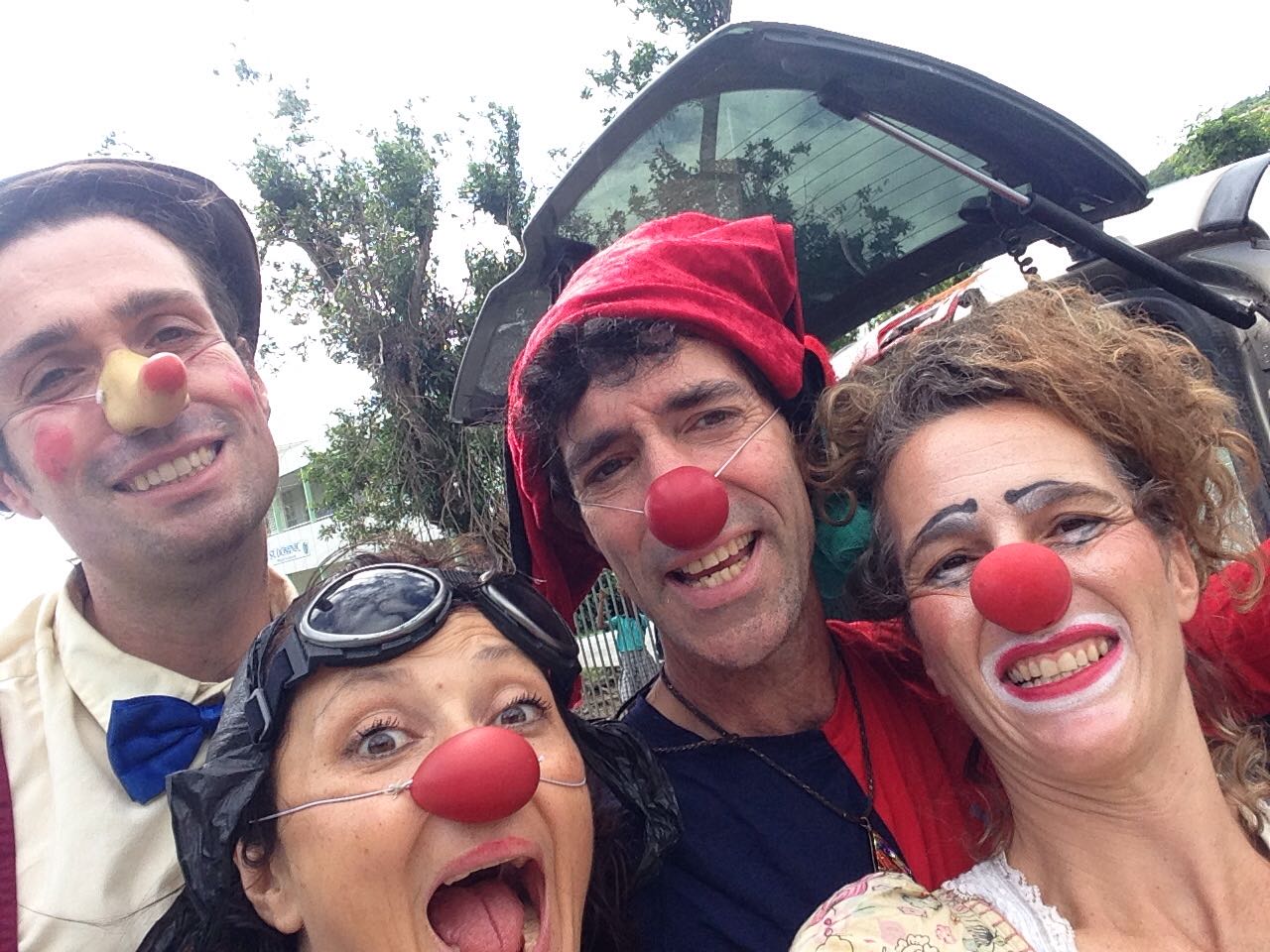 Today, I walk into town as a “pied piper,” playing my high-pitched recorder for anyone I pass on the sidewalk. It’s so hot here that the Bostonian in me almost forgot it’s December. There are some holiday decorations, so I think maybe I’ll play a seasonal tune. What’s wrong with tooting my flute to “Jingle Bells”?  You know, “dashing through the snow, in a one-horse open sleigh…”

Hrmpfff.  Why not try it just for kicks.

And guess what? The locals don’t just smile—some of the security guards I pass sing along!

One late afternoon, with our shows over, I head to the Greenhouse, where we get free wifi. I play a tune while marching to the beat. Some workers rebuilding a hurricane-damaged store started singing. One bobs his head, so I shout, “Bust a move!”

He smiles broadly, but just waves.

The next afternoon I pass by the same crew. One guy goes for his wheelbarrow, and while he’s pushing it, he wiggles his butt to the beat. The other workers cheer wildly.

The next day, I pass these workers one more time. They’re so primed, all four guys have a dance-off! 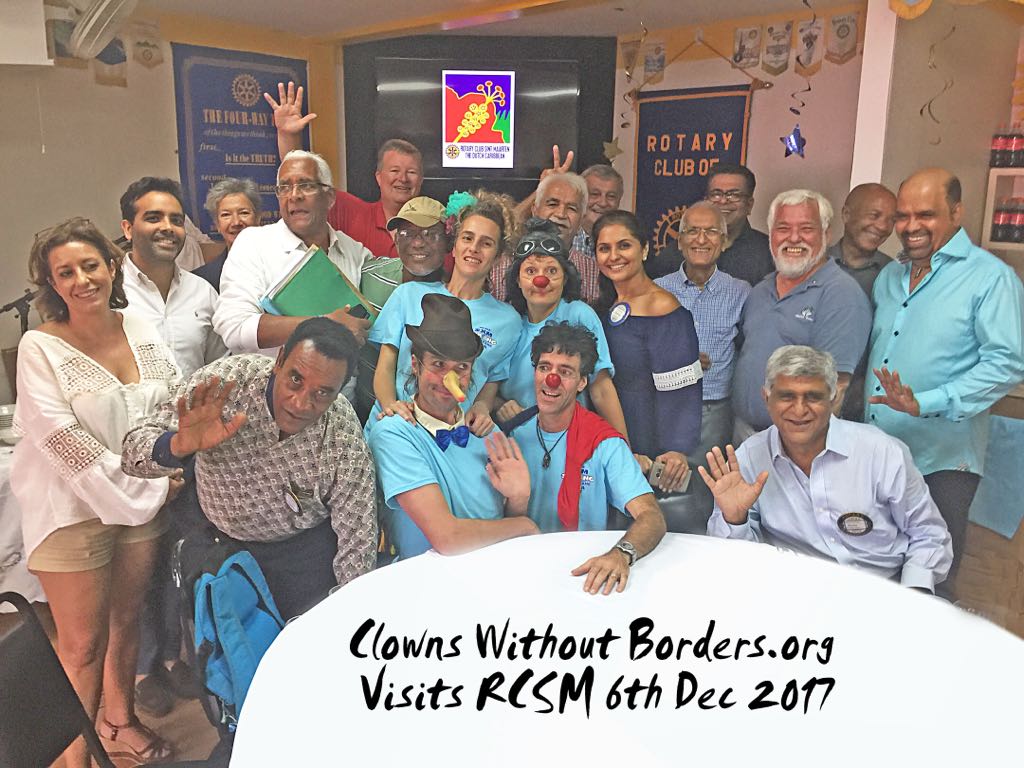 After our final show, our organizer and clown troop member Albina Matuzko shares some food for thought:

“We’re changing the way Sint Marteens thinks about clowns,” she says. This sounds a little grandiose to me at first. But I just listen. “We went to nearly all the schools on the island, both the Dutch and French sides. They hardly ever see a clown. To most, a clown just gives away balloons.”

This is an interesting point. It’s a small island, and we’ve been all over it. Wherever we go, we run into people who have seen us perform, or at least heard about the show. Albina continues: “At first, people had little understanding of clowns. Now they see what we can do. They see how clowns lift spirits. And you helped me, as a clown teacher. I’m hopeful that I’ll get more students. After working with the three of you, who all have a different style, I have much more to show them.”

These are very generous words from Albina. She makes me wonder about what will happen after our visit. Could the Clowns Without Borders tour, combined with Albina’s vision, get more locals spreading joy and laughter with things as simple as a goofy smile and a red nose?