During the three weeks, I spent in Kakuma, I could understand the importance of being watched. The importance of being noticed by someone, and depth that this creates. I could understand the power of laughter and how it is transformational, full of freedom, hope, and excitement. When laughter is well applied, and well meaning, it is as if it can wash the soul.

We saw this in the laughter we shared. In a refugee camp with more than 180,000 people, where more than half of those people are minors. Where everyone is in “survival mode”. The crowds of small, defenseless children watching our show were controlled by adults with a switch. It’s a normal thing for the children, to have an adult threatening them with a stick to keep them in line. The bat just does not quite hit them, but their mere presence, to me, seems threatening. We experienced this during our shows. Like I said, it is normal, and I know that there is no evil in the behavior, and yet I got the sense that it is their culture which is the thing being controlled. Being out of control is something that there is no room for; not for these children.

During one of the first shows, I made a comedic run into the crowd. I felt a sudden and immediate fear from the audience. Of 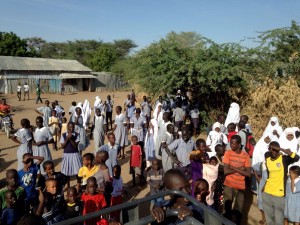 course, I retreated as fast as I could and started to see that fast and incisive movement turns out to be threatening for the audience.

From there it started to make sense.

The way that I presented myself to the audience had to bring confidence, affection and most importantly, had to be real. We had to present with a feeling of lightness and attentiveness. For our dear audience to feel good and safe, we could not represent any threat.
I learned to be subtle. Our bodies were sufficiently strange to them, without even considering the makeup, colorful clothes and the way of speaking. We wore barely any makeup on this trip. We, Muzungos (their word for white people) were the first Muzungos seen by many of our audience: Fine, straight hair, blue veins, light skin. People with different cultures and beliefs reacted towards us in different ways, some suspicious, other open, and some other curious, but ready to run.

But we wanted deeply to connect; we wanted to break this barrier in a place where there is no artistic reference, no relation to a clown. In Kakuma, it does not mean anything to appear with big shoes, a red nose. People just think you are strange. You end up being considered very strange at first – so many people asked me: “What’s that on your nose?”
I remember a funny situation after a show:
My clown is named Jurubeba. For our presentations, I wore a long flowing dress, tights, and oversized clown bloomers underneath. One day after the show, a teenager of about 15 years arrived, and spoke to me just like a teacher talking to a child who has done something wrong:

“Hey ma’am, you think you can show us your underwear?”
(Happy Jurubeba shows again her panties)
“And what is that in your hair?” (Referring to a red bath sponge I wear in my hair as an accessory)
Jurubeba: “Because I think it’s very beautiful!”
She: “I know. And these very big shoes and this dress for what!?” (Jurubeba lifts her skirt and shows how to walk with these shoes)
She: “Madame, you look like a cartoon!”

Still talking about my look, we smile. We are all sweating, crowded, breathing in the dust, and each person just one more in a crowd. But then, through this exchange, we begin to see one another. Suddenly being looked at means becoming someone in that instant. Every moment, we have a beautiful opportunity to exchange, connect, communicate, be recognized. This is a feeling of being a human who is seen and heard and takes up space, and it’s so difficult to explain.

Another memory that illustrates well what I am trying to explain: 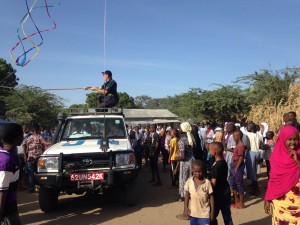 The camp is huge, with six different sectors. It’s truly like a city. Today the show was in the small town of Kakuma, off of the field. There were moments of great emotion to arrive at this place. We climbed in the back of a truck and went to the place where we would have the presentation. Many children ran along the side of the truck; the music was loud and the speakers announcing the show of Clowns Without Borders. I’ll never forget those eyes, those smiles. They jumped, hugged each other with joy, sweating in the heat, breathing all that dust. It was a magical moment for them and the adults as well. A woman in her 20s with a face that showed suffering, ragged, breasts that fell out of her blouse, ran with open arms. Sometimes she closed her eyes, having an experience that seemed transcendental. She appeared almost without energy, without physical strength, but still, she accompanied us! Yes! Art creates this liberating space! It is very powerful, cathartic, essential!

Kalobayei:
Today we made our 11th show, at a party in the “new” Kakuma sector. Kalobeyei is a pilot project that attempts to integrate the welcoming, established community with the newcomers who are arriving seeking refuge right now. This sector is even more rustic, simpler, and less than six months old. The people moving there are farmers from South Sudan, who are no longer able to grow because of the war. The people are much simpler and used to living in a very simple way. When they first met us, they felt estrangement because of our unusual appearance. There was suspicion, and it was a game of one step forward, one step back, until it reaches the first handshake, the first smile, a laugh and soon nearly 100 children singing and dancing together! What a sublime moment! The power of a look, seeing the smile of the soul that softens the hearts, and opens the door to sincere communication! The smile is the shortest distance between two people, and the look says it all. There’s no way to lie, and the pure soul of the child knows this well!!!

SOON AFTER…
A Muslim woman wearing a blue scarf started talking to me, gesturing. Of course, she knew that I could not understand anything, but surely she was asking for money and food, almost demanding. I pretended that she was not “saying that” and with a smile on my face, I began to imitate her. Then gradually, we surrendered to our interaction, it came first as a smile, a physical approach, and then a hug! 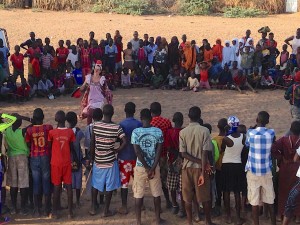 It is through the eyes that paths cross. In the smiles we witness, we experience Kakuma, and during sublime moments of the show (especially the before and after), where we are in fact very close to each other, where we feel the heat, the essence of each look, hear the lively voices. It’s all there is. For these moments we are on equal terms, without cultural and linguistic barriers! This is where it happens; this is where we feel and equate a great exchange of sensations, feelings, essences. This moment is where the souls communicate!