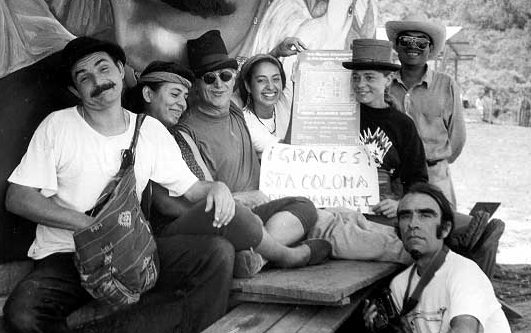 Our expedition meets in Mexico City on Saturday March 9th and performs at the Muestra Internacional de Arte Popular Escenico on the Calle de Moneda, and then inside the Museo del Palacio Antigua de Arzobispado. This is a project set up by Eduardo and Ciria (Los Saltimbanqui) as a fundraiser for the expedition. We then travel down to Chiapas, to San Cristobal de las Casas, the next day. Four of us go by plane and Los Saltimbanqui drive down in their pick-up truck, which we will use for transportation in Chiapas. The truck is set up with a camper shell and a makeshift back seat, enabling the six of us to travel together.

Los Saltimbanqui arrive to Chiapas a day late due to car trouble (a leaking radiator), but our expedition reconvenes just in time for the evening show at Teatro Zabadul, another fundraising effort at Muestra de Artes Escenico Popular. That afternoon, we meet with Pablo Romo from the Centro Derechos Humanitarios Frey Bartolome de las Casas. He had planned to bring us to the Chamula community of Primero de Enero, but some of us hadn’t been unaware of this plan.

Miscommunication aside, we quickly put a plan of action together, gather a few props and head out to perform an unscheduled, early show for the community. There seems to be a little confusion when we arrive—some type of misunderstanding about when we are supposed to be playing there. But we are welcomed and go set up in an open field.

The word spreads quickly through the community and an audience gathers as we prepare our stage, using the puppet screen as our backdrop. We perform for a group of about two hundred people who react with great pleasure and laughter to the performance. This is our first show and we feel good. The children are quite ecstatic afterwards. Their playful spirits are awake, and Ciria starts them on little races around the field as we pack up our props. We’re in a hurry to get back to San Cristobal for the evening show when Ciria sends the kids out on their third race, this time in slow motion. It’s quite special to see something of a transformation. The kids are a little skeptical when we arrive, curious but unsure of our purpose. As the show progresses, they become more understanding of the humor underlying the performance and they embrace it. The adults in the audience do the same and the spirit of celebration grows.

The evening show at the Theatre Zabadul, also billed as Muestra de Artes Escenico Popular, goes quite well, although its limitations as a fundraiser are evident. It would take quite a few of these to raise a significant amount of money. We meet at the Centro Derechos Humanitarios the next morning, and Pablo Romo gives us an overview of the current situation in Chiapas as well as practical traveling tips. We spend the afternoon in preparation, buying some food and other basic necessities.

We travel to Oventik that evening, arriving at dusk. The woman at the gate takes our names. A man comes out and examines the contents of our car. We are invited inside to the auditorio where we meet with four bandana-ed men who, after some questioning, set up a show time the next afternoon and offer the auditorio to us as a place to sleep. 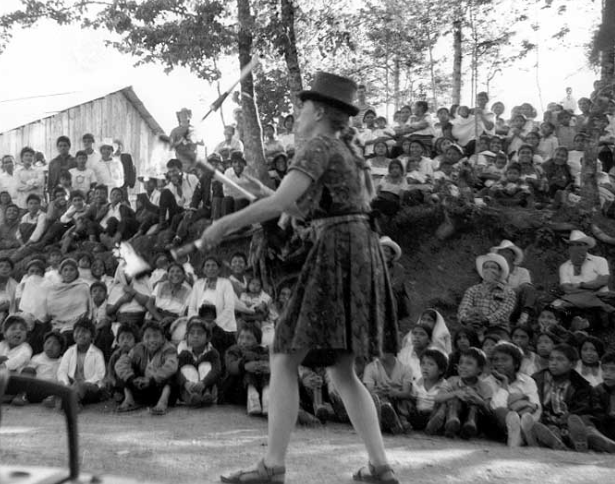 The entire community turns out the next afternoon for the event, and it’s evident that they’re treating it with great respect. We perform for over an hour. It’s clearly a completely new cultural experience for them, although the laughs are not lacking. The men with the bandanas are laughing the hardest. The children are fully invested although a little shy. Since the audience is unfamiliar with this style of performance, they are not used to applauding or participating, but this doesn’t hinder a warm feeling. When we finish, there’s an uncomfortable silence and one of the bandana-ed men comes to ask us if it’s over. We ask him if he would like more, he asks the community, who respond positively, and we perform for another forty minutes.

The response is wonderful and whereas before we were treated with respect, afterwards we are treated with warm friendliness. The men invite us to come back anytime, “notro campo es tu campo,” and they cook us up a meal. We are all very moved by the experience. Some of the children gather around, full of curiosity, watching us pack up and load the truck. The energy surrounding the show reminds me strongly of performing in refugee camps in Zagreb, Croatia. There is a request for us to come and perform April 10th or 30th, or to send some performers to the community. We return that evening to San Cristobal in order to be able to travel the next day to La Garrucha.

Getting to La Garrucha is a similar to our trip to Oventik, although the distance makes it a considerably longer trip. When we arrive, we’re asked to perform in a few nearby communities, but we’re on a tight schedule and cannot oblige. We are asked to do a show in the morning for the kids, and one in the afternoon for the whole community. The hot sun makes the morning show difficult for both us and the audience. It wasn’t the best plan, but the evening show is a big success. Once again, the whole community turns out for the event and we have to wait a while to start because the women are not yet present. They’re busy, we’re told, preparing for the event.

The kids at La Garrucha, especially the boys, are not as open to laughter and I find myself having to pry them open. We’re told about how the community had to leave their village last February. The boys appear to me as little men who are aware of their responsibilities and the nature of the conflict—the child inside is shrouded.

People from nearby communities have come down for the show, including one group who arrived from a community that’s two hours away by foot. Since Los Saltimbanqui came to perform here last year, the welcome is more open and informal. They hold a dance in our honor the night of our arrival, and there is another dance after the show. We’re surprised and enjoy the relaxed atmosphere, despite the close presence of the military. We see occasional army vehicles passing on the road near the community, and the morning we leave a squadron of helicopters fly by in both directions.

Upon our return to San Cristobal, I split from the rest of the expedition. They travel to La Realidad and I stay in San Cristobal in order to go perform in several nearby communities. One day, I accompany Pablo Romo to San Jose where he’s celebrating mass for the Fiesta de San Jose. The next day I accompany Father Miguel to Candelaria on a similar excursion. In both situations I am introduced to the community before mass and do a show for after mass. Both shows are very warm and well received, full of laughter and special moments. I am invited to eat after the show and I feel very privileged to have these experiences. There’s a recurring sense of unfamiliar, that my performance is outside anything that these people have ever experienced. Although they are familiar with the term payaso, it’s clear that this form of performance is new to them. 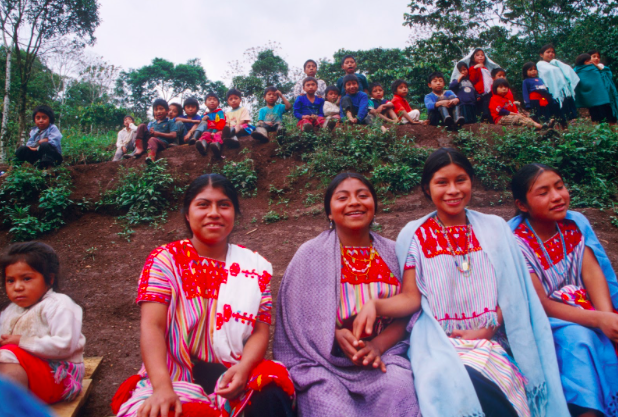 On the ride back from Candelaria, I have a discussion in the car with Lupita and Miguel about the traditions of the village, and I’m told about the Mashas who animate certain grand celebrations. These are their payasos, their tricksters, who wear masks and do traditional dances with the kids, if I understand correctly. However none of these people have seen things we take for granted, even such simple things as soap bubbles. In fact this is a big hit, and as I blow bubbles before mass at Candelaria and San Jose, I am surrounded by curiosity and laughter. Once again I feel so privileged to be able to share joy and laughter.

I must admit, though, that there’s a nagging in the back of my mind, a recurring question about the appropriateness of it all. What does it mean to introduce yet another modern element into their culture, one that they’re unfamiliar with? Obviously I’m entering the situation full of innocence and with good intentions. Yet I’m bringing something new and different. I know it’s positive and still I wonder if there’s some negative aftereffect that I’m unaware of. What do they think of this man who comes and does funny tricks and makes things disappear? There’s some apprehension about my presence in Candelaria, and after discussion with Lupita in the car, I’m made aware that they were considering the possibility that I might be a real magician, one who can throw spells. This apprehension was eliminated (I think) by my good nature and the obvious positive direction of my energy. Still, I wish for some feedback.

A fax from Pablo Romo telling me that the communities want to know when the payasos will return has answered some of those questions. Laughter is, as he says, a human right. This was apparent to me when I performed at the Campamiento in the mercado at San Andreas S’acamchem de los Pobres. On Pablos’ suggestion, I travel up to San Andreas accompanied by Caroline, a friend from Veterinarians Without Frontiers. As I perform in the parking lot in front of the mercado, the show grows. At first there are maybe two hundred people watching, and by the end the crowd grows to five hundred. The great majority are men, with only a few women and kids present.

It’s evident to me that it would be wonderful for more expeditions from Clowns Without Borders to travel to Chiapas. There is no lack of tension, due to the underlying conflict, and therefore an ongoing need for laughter in the communities. Another important point, and one that was constantly expressed to us, is the need for international presence in the communities. This presence is essential, discouraging the military from any escalation. The help that the Centro Derechos Humanitarios provided us was instrumental to the success of this tour. Many thanks to all of you for helping make this possible and I hope that cooperation will enable more expeditions to travel and perform in Chiapas.