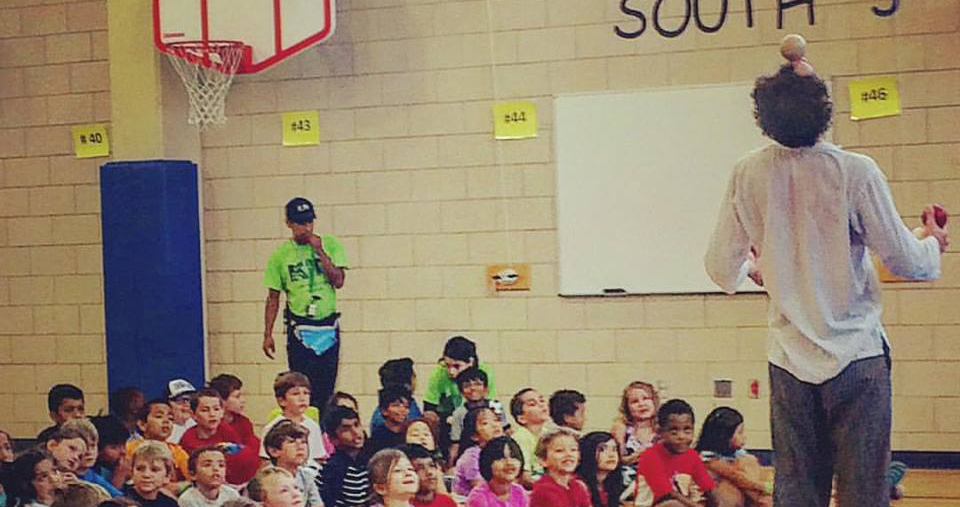 With the end of our big show with the residents of St. PJ’s, my first Clowns Without Borders mission has come to a close! It was a wild and beautiful time, and a huge learning experience for me throughout our two weeks here. The show was a perfect conclusion. It was such a treat to see how much fun was had, how many of the children had opened up in various ways, with themselves, with us, with each other. There were lots of laughs and little victories. Seeing many of the children hanging on the edge of their nervousness and stage fright and then bravely stepping over it to perform on stage for their fellows was powerful in and of itself. But also having spent the hours with all of them in workshops and seeing the fruition of those experiences and their practices, and their individual characters shining through in the clown and theatre games.

One incredibly shy girl had such a huge smile on her face as she took the stage to pass juggling balls with Sayda. Another girl, who had expressed how excited she would be to show her mother that she could juggle, had constructed her own juggling cubes out of paper. Another boy was so happy to position himself on stage directly in front of his sister. An older boy, who clearly filled a big brother role to many of the smaller ones at the shelter, had been sitting out for the juggling performance, but when he noticed that the little ones weren’t coming onstage either, he led the way up as an exemplar.

And, little victories in myself, as well – as most of my work is as a juggler and skill performer, in the past purely acting would have been far too nervous of a situation for me. It feels that in the time here I’ve been growing alongside a lot of the children, hammering out my own last little stage fears and anxieties. And I owe a lot to my fellow clowns Marisol and Sayda in this regard!

It has been sad today to pack the things and realize that we won’t be heading back to St. PJ’s, as every other day here lately! I had a heavy heart after the show closed yesterday and we packed the car up. Many beautiful relationships were forged, and we were all surprised at the healthy and homely environment the children have there. Because it is a detention center I had originally imagined a much staler environment, but, the environment is approached with a constant and warm concern for the best interests of the children there.

So many more thoughts are there, but I just wanted to pin down a few while they’re fresh. Back to preparing to depart Texas and this clown mission! More thoughts to come soon! -Luther