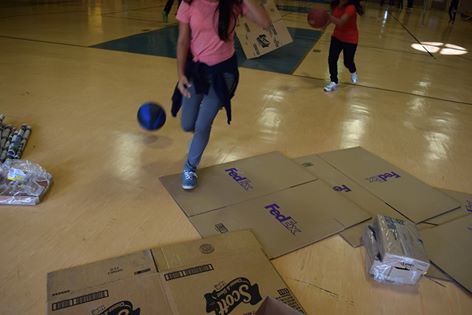 Tamara from FIT drove us to the Holiday Inn in one of the 2 rental vans used on the trip. The women’s rooms weren’t ready yet, so Leah and Derrick waited in his room while Tamara picked up Marisol & Olivia.

Marisol and Tamara went to get lunch, while the rest of us recuperated from the trip. The whole team (at that point Desi, Tamara, Mary, and clowns) met at 2:30 to do orientation at ST. PJs. We got the tour, more of an understanding of the delineation between the international and domestic programs, and then Derrick, Tamara, and Olivia spent almost 45 minutes trying to figure out the stalls in fingerprinting, while everyone else I guess waited in the lobby?

Both vans took a grocery trip to Whole Foods (although it was hard to decided whether or not to include TJ’s in the trip, and the 2nd van first went to pick up new team members at the airport who met us at Whole FOods). We snacked in the hotel rooms and at the pool, getting to know the FIT members.

Tuesday morning I believe we met at 830am (or was it 10am>?) in the hotel lobby after the provided breakfast. Everyone did intros and we learned more about each groups’ missions. This lasted almost 2 hours? Clowns then convened at the end of our fourth floor hallway and created an amazing show.

We had such compatible styles of scene improv-ing and character development and acro-choreographing. We must have taken a lunch break somewhere in there, and came up with a show:

-3 Alien Clowns enter, hunting for juggling clubs
-business with bumping into each other & hats falling off
-finding one club onstage and one we had a teacher plant with a kid in the audience
-Astronaut appears with 3rd club & lunges to take their clubs
-Aliens turn astronaut into clown who joins them
-one alien drags astronaut suit upstage (girls in audience LOVED this) and the propped it up onstage to watch the show.
-Derrick solo club juggling
-Marisol trumpet solo–>duet with Derrick
-Derrick broom interlude, with audience clap participation
-Leah & Olivia Old people’s dance off w/ two staff members
-Derrick chose child from audience
-Leah copycat
-All: rope bit involving 3 clowns unknowingly standing on the rope while the 4th clown tried to run with it.
-Dead & Alive, with an ambulance entrance before-hand
-Acro & Club passing finale

Somehow by then it was 6pm, our debrief time with FIT, where we heard about their first day, and then Tamara took us to a Vietnamese restaurant where we had take-out and probably our earliest night of the trip, after all our rehearsal energy