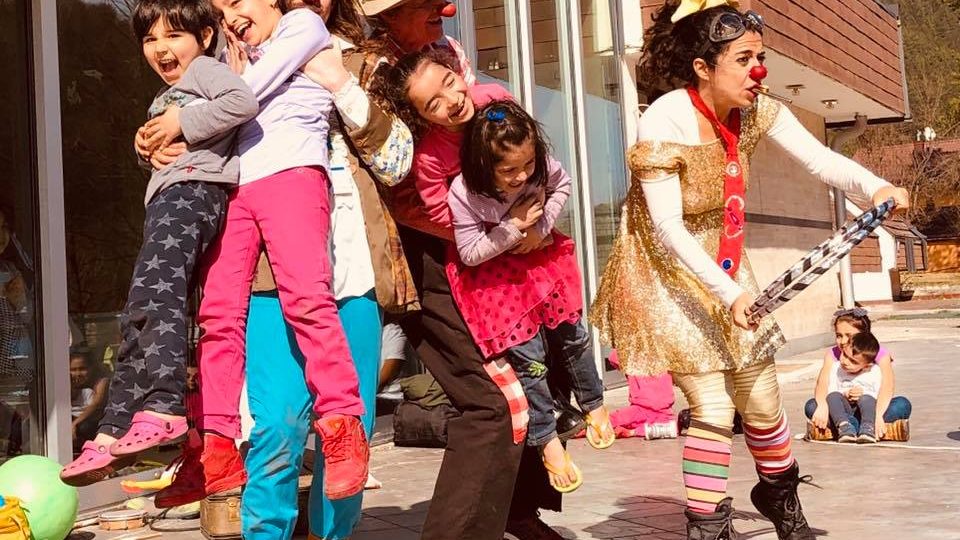 Clowns Without Borders performances are a time of levity for people whose lives may have none. In Bosnia, Dustin and Sabine talk with audience members about their experiences of being refugees, specifically of playing “The Game.”

It’s day two of performances in the Balkans. We already performed for 200 men on our first day, and I was once again reminded that clowning is for all ages. The show was a huge success, big laughs and a lot of happy faces enjoying the meaningful, honest moments of interaction.

On that day, on the way out, I met a little three-year-old kid who was amazed by the tiniest bubbles, he had a big redish-blue scar on the left side of his face. I asked his Syrian mother, “Where did this come from?” and she said, “Oh yesterday he fell when we were doing ‘The Game.'”*

Today it all makes sense. We perform for the wildest kids ever, and afterward they gather around us. One of the most talkative ones starts playing The Game. She has such a strong character and is a brilliant storyteller. With all her power and loud voice she starts acting out their game from last night:

Then they get caught by the police.

She continues the story from the previous night: “They put us in this closed van! No windows, very crazy roads. We started vomiting, but they didn’t stop. They just kept driving and sent us back to this camp in Bosnia.”

This is when it all made sense to me. 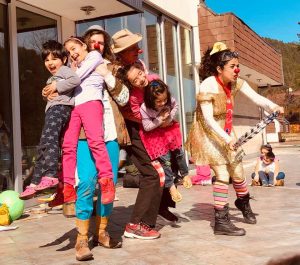 We perform for kids between four and 12 years old. Last night, and all the previous nights for the past five months at least, they were caught by the police and sent back to the camps. Most of them come from Syria and Iraq. Some from Iran.

The police tell them, “Your countries are safe now. Go back to where you came from.”

I leave with mixed feelings of extreme happiness and extreme sadness. We got to play with them, to learn the importance of play, of laughter, and of resilience, but we also re-learn the cruelty of humans.

*The Game is the name they give to their act of crossing the borders. They go to The Game every other night or so.

Today, I spoke to a highly educated young man who was forced to run from Afghanistan more than two years ago. Everything he owned—including his family home—was seized, and his life threatened by corrupt military forces. His whole community was either killed or forced to flee.

No country will give him citizenship because he travels with his sister who is “fully disabled.” So far, no nation is willing to take her in, due to her disability. 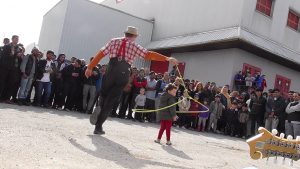 When they try to cross borders, he carries her on his back. Last time they were caught, he and his sister were both beaten by Croatian police. He showed me photos of her wounds, as well as many other photos from his journey. They wait here in Bosnia, and he told me he specifically dreams of someday reuniting with his aunt and uncle in Canada.

Over the last few days, I’ve heard dozens of stories similar to this,  first-hand from the people living it, from human rights workers, from my experienced colleagues, and so on.