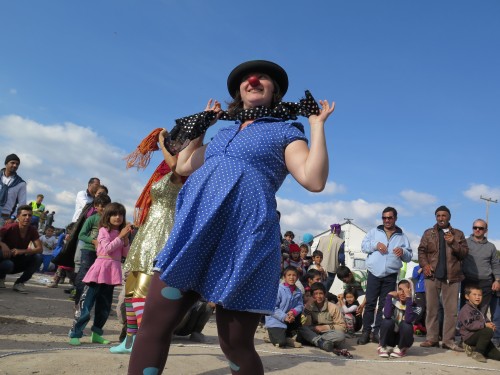 The situation on Lesvos is always in flux, so our plans change constantly. One morning we were about to head out to perform at a refugee camp, when we saw there were hundreds of people on the beach a short walk from where we are staying. So, we changed the plan and decided to clown on the beach.

The day was bright and sunny. Many people were lined up along the street waiting for the bus that would come to take them to be registered. Wet clothes were hung up on the branches of shrubs, and draped wherever there was space. We learned that these people’s boat had faced some trouble, but luckily the seas were relatively calm that morning and everyone survived.

We were immediately well received. I think all the people were feeling happy to be alive, and to have reached this huge milestone in their journey. The mood was jovial, two men were even happily swimming and splashing in the water. We waved hello and shook hands, immediately spottable in our bright silly costumes. On the beach a crowd formed around us, Clay took out his charango and I took out my accordion, we began playing a fun song with nonsense lyrics that Clay had taught me twenty minutes earlier. Everyone sang along. After the song we took turns clowning and accompanying each other, hat tricks, lasso, etc. the crowd was easily won over. 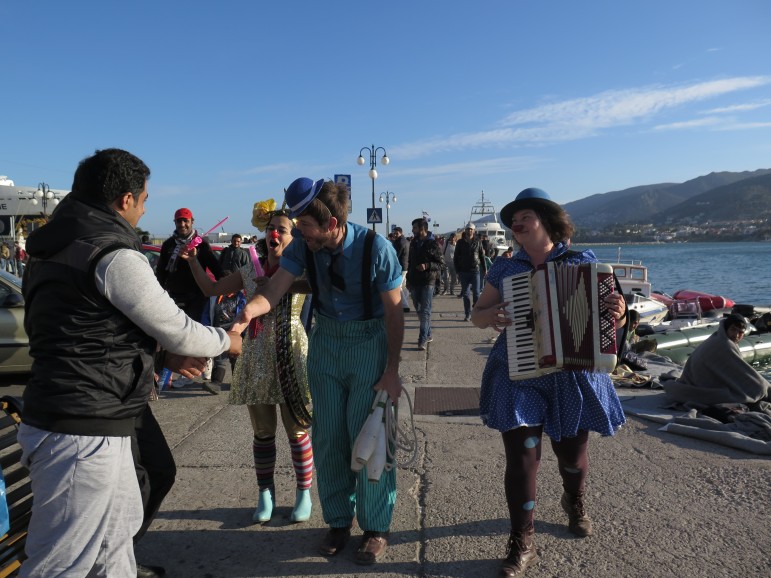 After an hour we walked down the street to take a short break. On the way back down the beach we came across a bright orange life preserver. Clay picked it up. It was a perfect clown prop. Was it too sensitive a subject to joke with a life preserver after these people had a perilous trip across the sea? Maybe, maybe not. We decided to try it, I’m glad we did because it turned out to be a great success. We clowned with the life preserver, each getting stuck inside of it and improvising slapstick ways to ineffectively help each other escape only to get stuck in it ourselves.

Sabine began a call and response dance game with the audience. Several men came forward with amazing dance moves ready for a night out on the town, they copied Sabine’s clown moves and added their own. Our time at the beach was basically a big party. 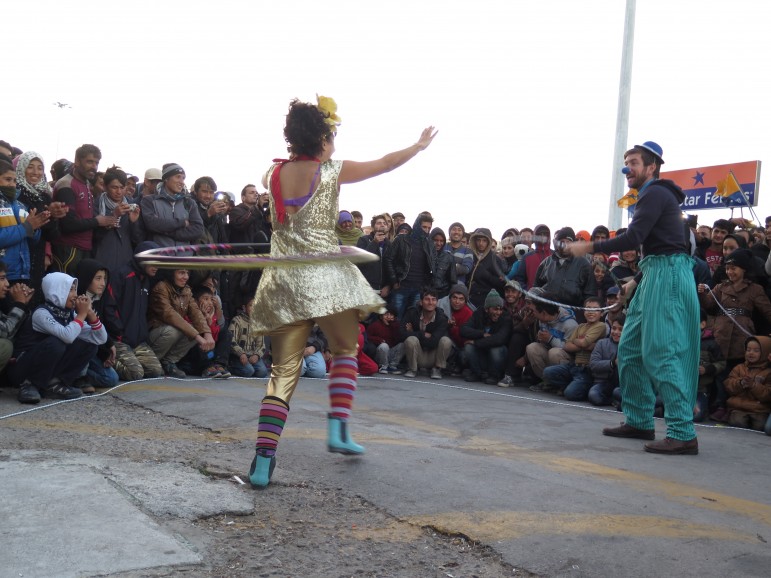 The next day was our first show at Moria camp, which is the biggest camp and is run by the police. At first we were intimidated by the camp because it had huge fences and barbed wire, it looks like a prison. But once inside, we were met with the same joy and playfulness we found on the beach. We were led up a hill and through gates to a designated child area for kids who were in vulnerable situations. Walking through the gates and barbed wire, again I felt the heaviness of the situation these people were in. Then, when we turned the corner into the child area, a girl jumped into the air, ran to us with arms flung open, and embraced each of us. She had been on the beach the day before, and had played with us for a long time. She greeted us like old friends. Before starting the show we each greeted the kids.

There was a mother holding a small girl, maybe three years old, with scratches on her face. The girl was shy at first, burying her face, peeking out occasionally. She peeked out here and there, and as she saw the other children laughing and playing with us, she became more excited, eventually I got her to crack a smile with my cross-eyed, puff-cheeked funny face. That was it. After that she was on the ground, running and jumping with the other kids.

The mother’s eyes met mine.  She was not smiling, but was present with me. I could see a huge sadness. She was not available for joy, at least not for today.

During the show the kids laughed with each other like usual. The mother sat behind the crowd, facing sideways, staring off. Later we learned that several of the children in the crowd were hers, and that her husband had died the night before in a shipwreck. I thought about the difficult task she had ahead of her, starting life over in a foreign land, caring for several children. At least we could cheer her children for a while, I thought, and at least there was a time where she could just be with her sadness and know that her children were close, safe, and having fun. And at least if she wasn’t ready to smile, when our eyes met I was with her for a moment. I don’t know the details of her story, but I do know it can be healing to look in someone’s eyes and feel seen. 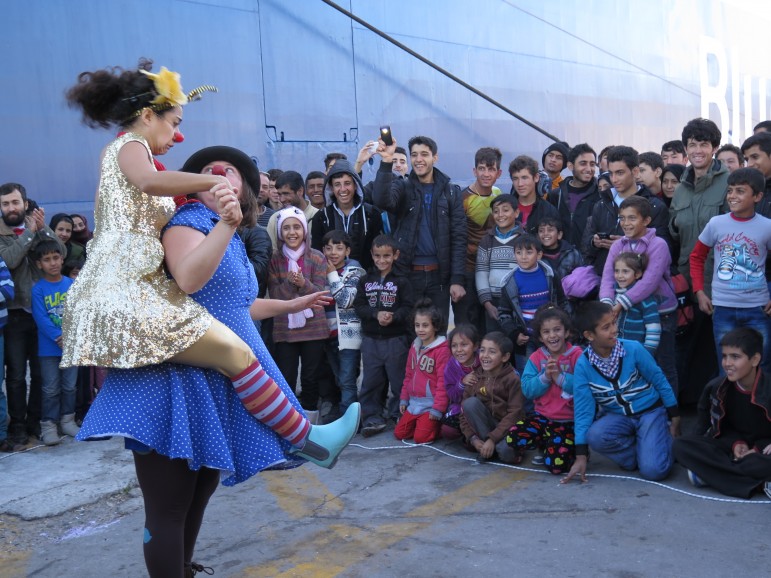 A few mornings later I woke early and walked to a nearby hotel to speak with a Russian journalist. Again there was a group of people, wet, who had just arrived on the beach. Volunteers were distributing water and blankets, getting people in line for the bus. My instinct was to begin with the bright eyed hello waving I do when I’m clowning, but quickly realized I was just dressed in normal clothes. Suddenly my plain grey skirt and jacket felt like a costume, a disguise.

As clowns with bright costumes and big open faces, we are approachable. We are open with people, so people are open with us. People immediately sense we are there to have fun with them. They are free to play and do silly dance moves without people thinking they are idiots, because we clowns are bigger idiots than they’ll ever be. The aid workers with their khaki or neon vests have likewise recognizable purposes; the refugees can go to them for water, information, emergency blankets, etc. Now with my normal clothes anything more than a polite nod felt almost intrusive. Just wait a few hours, I thought to myself, I’ll be a clown again and maybe see these same people, and together we’ll have some fun.