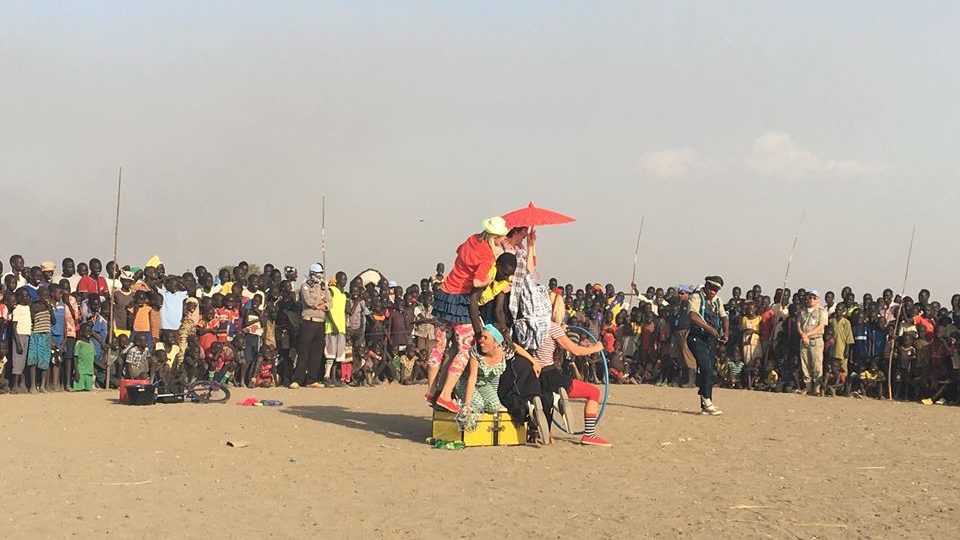 My head is still buzzing with the laughter of 20,000 children in South Sudan, and it’s been three weeks since I returned home! The children came to the shows hungry, thirsty and covered from head to toe in dirt, but they were roaring with laughter at the clowns. We received tons of great feedback from everyone that we worked with on the project. One of the project partners from South Sudan told us “This is the sort of activity that makes me proud to do my job.”

One of the most inspiring moments for me came in the Malakal civilian protection site. I was lying in bed trying to summon the strength to get ready for our next show in a few hours. I had fallen ill with a stomach bug, which combined with the intense heat to drain all of my energy. I had been resting so much that I hadn’t had a chance to meet the women who shared my tent. But at this moment, one of the women was there next to me.

We started chatting as I was putting on my costume and makeup. Her name was J, from a town near Juba in South Sudan. She told me about her work at the protection site, her two daughters who had fled to Kenya, her previous work clearing mines to make passage for food trucks, and her brother who had just been killed in the conflict 3 days prior. When I commented on how dangerous her work is, she said matter-of-factly, “This is just how it is.”

Then J asked me what I was doing in Malakal. I felt a bit sheepish at that moment, standing there with my box of makeup and red nose in my hands. I wondered what this strong, wise woman would think about a silly clown show. Nonetheless, I told her about our work, about our mission of bringing laughter to the children, and I showed her some photos. Her face lit up, and then she said in a very serious tone, “This is good work. I want to come to the show. Please give me some laughter that I can take to my daughters.”

Her words gave me the strength to get up and do the show that day, despite my sick body’s protests. It was our best show yet, and I felt a closer connection to the children in the audience that day. Everyone really loved it! The next day at the show, our last in Malakal, I spotted J in the audience of 4,500 people. On her face was a big, beautiful smile that melted my heart, and once again filled me with strength.