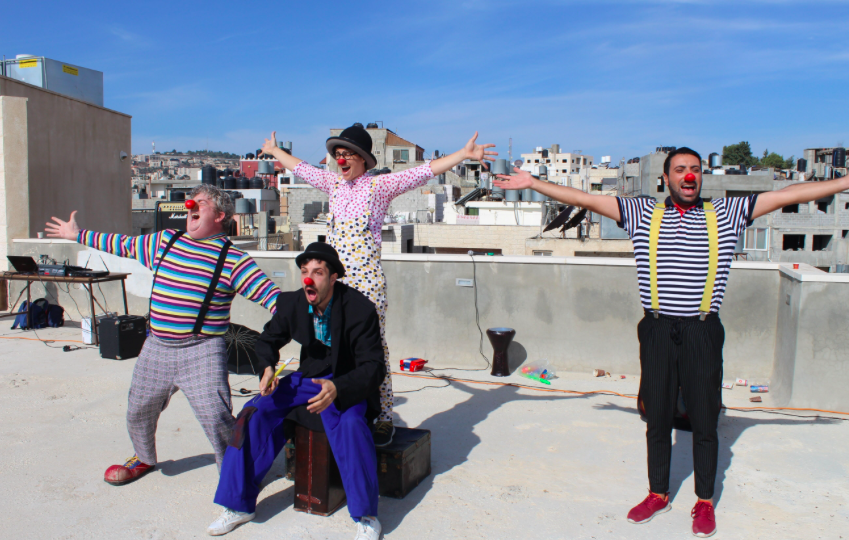 CWB – USA embarks on a three-year partnership with Diyar Theatre, a Bethlehem-based dance company. CWB performing and teaching artist Ania Upstill writes about the unexpected outcome of clowning in a bank, one of the most un-funny places to be…

Clowns Without Borders mostly performs for kids, but adults often come to watch too. Even more are drawn toward the noise we make while performing, and end up watching by accident. Adults deserve to laugh too, and sometimes you just have to take clowning to them.

Clowns At The Bank

Osama, our Palestinian colleague from Diyar Theatre, needs to go to the bank today, after we finish the show. Instead of waiting in the car, we decide to join him in the bank, dressed in full clown regalia. I take bubbles and Michael takes years of clowning experience. We enter the bank and Osama leaves to do his business. At first, we get a few curious looks and smiles, and the floor manager comes to ask us what we’re doing. We explain that we’re waiting. He gives us an odd look but leaves to attend to other business. We go up to where Osama is waiting at the counter, and suddenly the big manager appears. He sternly instructs us that we can’t be near the transactions, but softens when Osama explains that we’re with him. Still, we’re sent back toward and entrance where, naturally, we start clowning around. Michael investigates the water cooler, I blow bubbles outside the doors.

As we attract more attention, the floor manager has to stop another customer from taking a video of us inside the bank (illegal in Palestine just like it’s illegal in the U.S.). We oblige with a selfie instead, and then we start getting more attention. Suddenly, the security guard wants some photos with us, and then the floor manager does too. The staff are getting into it, so Michael makes a fake appointment with a woman at a desk, and we go over to see her. She offers us a candy, and Michael takes the whole basket to offer candy to everyone waiting in the bank. I see the big manager approaching me again, but this time he has a smile on his face as he asks me to go into a fancy glass office and give the biggest manager a kiss on the cheek! I oblige, and there’s laughter from all the staff inside and outside the fancy glass office. They ask me to do it again so they can film it, so of course I do.

You never know what can come from unplanned clowning! A man comes up to us and introduces himself as a doctor from Hebron who’s part of a group having a benefit for breast cancer. Would we be interested in performing? Michael and I connect him with Ahmad, one of our Palestinian clown colleagues, in the hopes that someone from Diyar Theatre can make it.

By the time we’re leaving the bank, the floor manager thanks us for coming in and says that we can come back any time: “You just made this day so enjoyable for us all!”