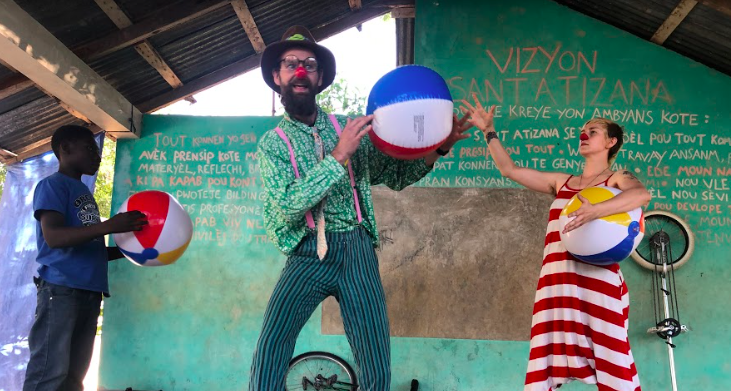 Even though laughter is universal, the words that accompany CWB performances change all the time. Tim writes about Haitian cultural familiarity with circus and clowning, and the creative wordplay required to communicate with our audiences.

“What should we call this?”

During our trip there have been some unexpected linguistic barriers. While my Kreyol has improved drastically (I can now even make phone calls with relative ease), explaining what we offer remains a consistent challenge. Even though there are words for “clowns” and “circus” in Kreyol, many folks on Lagonav simply haven’t been exposed to either of them.

Early on, I try using the word kloun but most folks don’t even know what that is. I’ll say sirk and get blank looks. I try using the words komik or komedyen which people are better able to understand, but for many it brings to mind the character of Tonton Dezirab, a sort of country bumpkin and archetypal comic figure.

I try teyat (theater), which doesn’t feel quite right, while progwam feels too vague.  When Antoine arrives, we begin to use the word espektak, which captures the energy and thrill of what we were doing—even if people don’t quite know what they’re getting into.

Even words describing specific acts like jongle (juggling) or monosikl (unicycling) fall flat for most, so I widen the terms, saying tire boul konsa (a very rough translation of “throw balls like this”) while miming juggling, or describe the unicycle as a “special bike with only one wheel.”

Robin’s balloon act is, in many ways, the easiest to describe. Most folks around the world can imagine what it might be like for someone to enter a giant balloon, even if they don’t have context for it.

What is pretty universal, however, is how folks respond after seeing the show. We hear lots of comments like, “I had no idea what to expect, but I loved it!” or, “I’ve only ever seen things like that on T.V. and now I got to see it in real life!”

As we pass folks on the road, they’ll often shout out catchphrases from the show, such as pi danje! (More danger!) or pa danse isit! (Don’t dance here!). But one of the most common things we hear is, Eske ou pral jwe ankò? (Are you off to play again?).