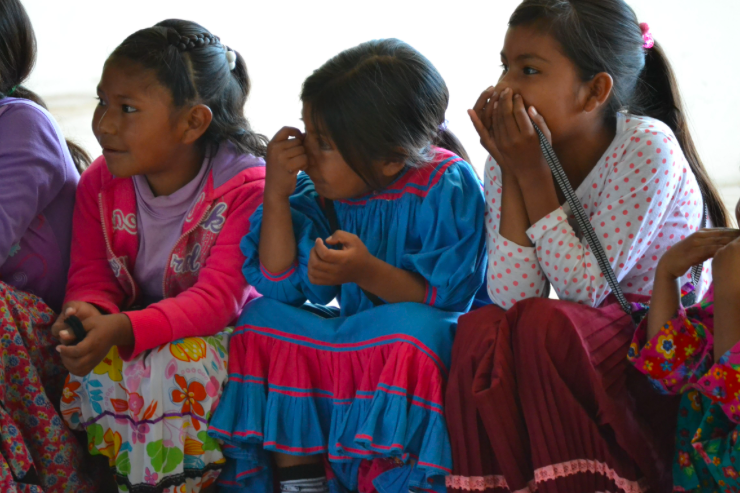 Julie Moore, who recently wrapped her first CWB – USA tour, writes about the challenge and relief of giving into the unknown. Wondering what to do when you don’t know what to do? Read on!

Here’s the thing: I don’t actually feel like I contributed much to the tour. I’ve never been on a CWB tour before, I’m not familiar with the Rarámuri, and I don’t speak Spanish. My American, capitalist brain wants to Work! and Do! and Achieve! in order to be helpful and useful, but in this case I can’t really do any of that. Thankfully, a clown’s impulses are totally different. A show requires some space and breath so the audience can take in, digest, make sense of what they’re seeing. Sometimes jokes need that slower rhythm in order to land. Clowns need to listen, to not-know. Allowing ourselves to be vulnerable is just as important as the “doing.” Even though that makes sense to me as a clown, it’s much harder to apply to the rest of the tour.

There’s a moment in the show when Darina, as her clown character Atanasia, leaves my clown to care for the world. The moment is newish, something we added to replace a different segment while still covering Darina’s costume change. And I, Julie the person, have no idea what to do. So I, Julie the clown, embrace that. I sit and think and look around and just…try things.

It feels very pure and honest—almost a relief in some ways—to embrace everything I’m feeling in that moment. If I spoke the same language as the audience I would asked for their suggestions and then try them out. I can’t, of course, so I follow whatever impulse comes my way. I don’t know how successful it is as a performance moment (the audience is generally pretty quiet) but my angst and confusion over not knowing what to do are very real. Darina can save the day again when she returns in her new costume. She offers the next game and solidifies her role as the show’s guiding force, while I mostly screw things up and cause trouble.

I try to hang onto that feeling as best I can after the show. I find ways to play with the kids that don’t involve language (turns out a ukulele is pretty handy in those situations) and embrace uncertainty. Sometimes that’s all you can do: Bring your honest messy self to an interaction, and thank goodness that’s most, if not all, of what clowning really is.