“The Show Must Go On” is the golden rule of performance. As performers, we put aside injury, illness, and heartache when we step onstage. In character, in front of an audience, our personal ailments have to fade away.

At Clowns Without Borders, we go to extreme measures to make sure the show goes on. Beyond the hours of fundraising, organizing, and travel that go into every project, each performance comes with a set of challenges. In Nepal a team waded through a flooded river, carrying props over their heads, to make it to a show. In rural El Salvador, when the road twisted into impassable track, the team walked three miles to perform. In Lesvos, when were unable to enter Moira camp, the clowns performed outside of the fence, sending their laughter and bubbles through the chain link. In Turkey, after the Coup attempt, when our US-Based artists were grounded, the Turkish artists led the tour on their own. The show must go on. 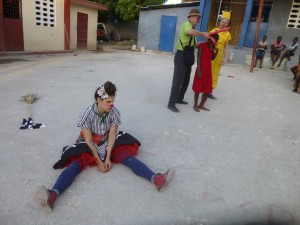 And so, it was incredibly disappointing to cancel a show in Haiti. Our Christmas show, nonetheless. We worked with two different groups of Haitian performers, Comedus, a comedy trio from Port-Aux-Prince, and MJC, a youth group in Grand Goave. We had performed with each group separately, and on the 24th toured together as a group of 31 performers! MJC was excited to host a Christmas Day spectacle in their hometown. All week, they had been telling us about the event. Beyond the three acts, it also included a DJ, a dance party, and a meal. 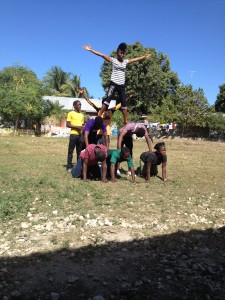 So why did we cancel this show? Why did we cancel the Christmas show, that our hosts had spent so much time preparing? It’s complicated. And also, not so complicated. While much of our work is about staying agile and assessing situations as they arrive, Clowns Without Borders has a few guidelines without a grey area.

Free, professional performances are the backbone of our mission statement. Experiencing high-quality performance is cathartic and offers a moment of luxury in environments where these amusements are otherwise quite sparse. Unbeknownst to us, the town we were in had recently banned free performances, and so audience members were being charged for admission. Though admission was low, 5 Haitian Gourdes, equivalent to $.07 USD, it wasn’t free. The town also required a venue change, from the town square to the high school.

Of course, our shows often include adults—parents, caregivers, relief workers, NGO staff—though our primary audience is children. We often give workshops for adults, but our priority is performing for children and families. On Christmas, the performance was delayed, and it was after dark by the time we were all set up at the venue. This presented a logistical challenge (how would the audience see us), and it grew late as our hosts went looking for portable lights. By the time we were all set up, children had gone home. 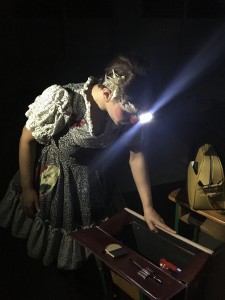 The venue change added a few more security challenges. There was only one door into the courtyard of the high school, and without lights, this made me a little uneasy about security for such a large group of people. The DJ’s awesome dance music attracted a slew of adults, and with them came alcohol…and potentially guns. Camilla and I noticed the two girls at the door taking money and frisking down adults, ostensibly looking for guns. That was the moment, we knew the show could not go on.

Making the decision was far easier than having the conversation. I far prefer being the person to start the show, by announcing our presence with a parade and song, than being the person who shuts down the party. I approached Morlon, and explained that we could not perform. To make matters worse, we had this conversation in French, and I was nervous about making mistakes. It’s one thing to mess up a language while leading a clowning game, another when initiating a tough conversation.

I explained why CWB could not perform. We came up with a solution, and in fact, the show did go on, but without CWB. Chris, Camilla, and I changed out of our costumes while MJC came up with a new plan. We attended the party as their guests, in street clothes. They performed without us. I didn’t count the audience, and didn’t count the show as part of the project’s impact. As hard as it was to make that call not to go on, ultimately, we had an incredible outcome. It wasn’t a CWB show, it was an MJC show. I hope, the first of many. 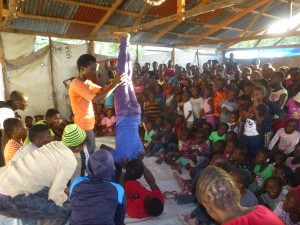