The majority of CWB – USA performances are free of language, however language (and translation) are often essential for our clowns to travel and create their show. In multi-cultural teams, the artists adapt and learn how to collaborate with each other. Matthew “Poki” McCorkle and Ania Upstill write about how they embrace translation (or lack thereof) in the rehearsal room.

Osama, one of our team members, has been absent for the past few rehearsals. He not only runs his own tour business and volunteers for Diyar Theater in his spare time, but he’s getting engaged this weekend! In Palestine, apparently, engagements and weddings are a big deal. Rami tells me, “Everyone in Palestine who has gotten married knows how to organize a festival. Here, weddings are festivals.” There can be up to 500 guests at an engagement party! Even though Osama said his engagement will be small, it’s still clearly an important occasion. We were all prepped for this as a team, and we’ve been able to get a lot done in his absence—but it has been an interesting time working in translation. Our other team member, Ahmad, speaks much less English than Osama (although far more English than we originally thought). Luckily, clowning is a highly physical art form and I, for one, hardly ever speak as a clown.

When we share the rehearsal room with Ahmad, we’ve learned to pick up on a few non-verbal cues:

I suppose all the same cues apply for English speaking clown partners as well!

Perhaps the most important lesson I’m learning is to allow time and space for play and trust-building. This is important in any ensemble, but in a group where language poses a barrier, simply playing can be magic. And it’s fun!

Overall, it’s such a joy and privilege to work with both Ahmad and Osama. Our collaboration proves, for me, that laughter does transcend boundaries and can truly bring people together.

Here are some of my tips for working with a multi-lingual group:

One of my favorite things we’re working on is a mirror bit with Ahmad. An empty picture frame is held in between us, as if it’s a mirror. First, I fall asleep standing up (only in a clown show) on one side of the mirror. Ahmad, as the trickster, reaches through the frame and taps me on the shoulder. I awake, yawn, and groggily look in the mirror. He plays my reflection through the picture frame, mirroring my every move, tricking me into thinking I’m looking at a reflection of myself through the empty frame. 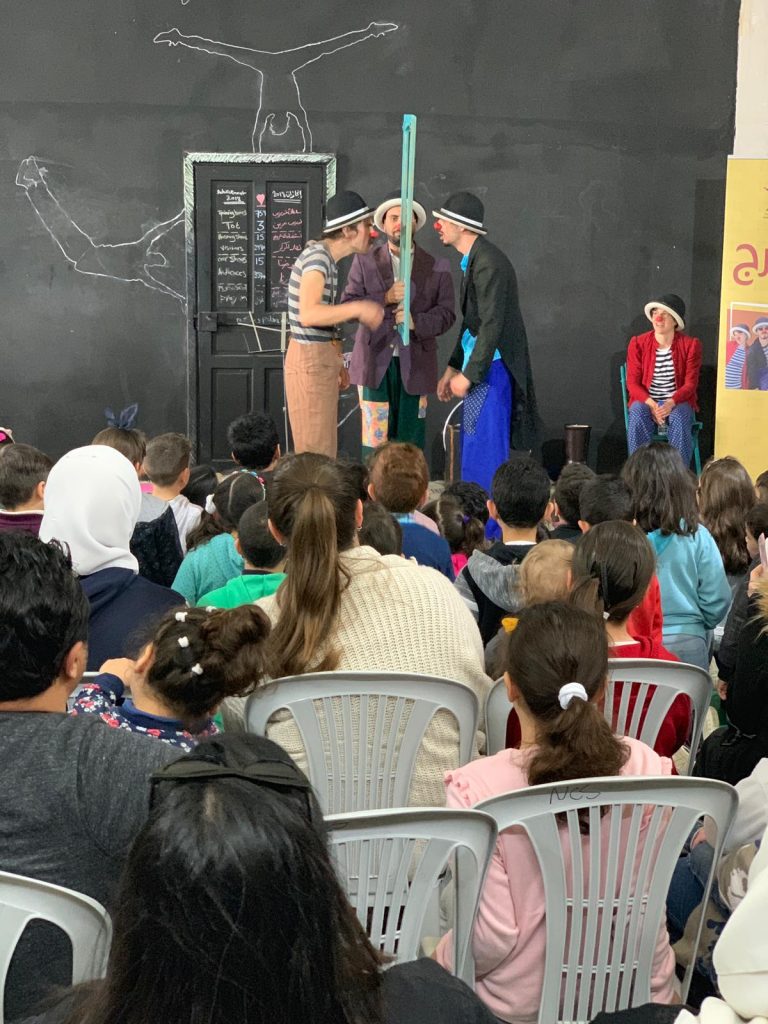 This is a trip for me, for two reasons. The first is that we have similar appearances, including our mustaches, funny hats and our height. I feel that if I squint hard enough, he could very well be my reflection! This is a sensation that must be experienced to be fully understood, and it’s downright trippy. The other reason this experience is strange, is that Ahmad and I are about as opposite as it gets. He’s an Islamic Palestinian who grew up in a refugee camp. I’m an American Jew from California.

This inherited privilege plays out in so many ways. Of particular relevance? As a Jewish person I have an Israeli government-issued “right to return,” a right to immigrate to Israel. In other words, I have the right to literally move into the very land that Ahmad’s family was displaced from and forbidden to return to.

Staring at Ahmad in the mirror, I reflect on how unjust the distribution of privilege is, and the many terrible ways it plays out around the globe. This is a whole other level of trippy.