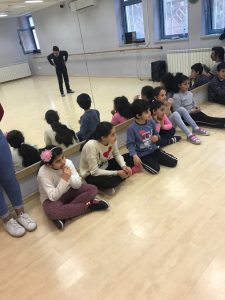 Today we teach two workshops to children at Diyar Theatre (with a rehearsal in between). The first group comes in from a local school, full of energy and bursting with ideas. They love the more physical games, like throwing an imaginary ball and racing around during “friends and enemies.”
They even make up their own way of playing “friends and enemies” that I’ve never seen before. Instead of trying to stay close to one “friend” and keep that “friend” between them and an “enemy,” little groups form to protect each other from all enemies by sticking together like glue. It just proves the variations are endless! At the end of the class, their teacher—an artist himself, we find out—says that the workshop helped him see them as people, not just students. There are sides of the kids he had never seen.

Kids are such natural clowns. During a game of “Bus Stop” one girl sits on the windowsill waiting her turn. In giving the instructions, I hadn’t thought to specify that it would be less distracting if everyone sat on the floor together. Oh well, it’s probably fine. She gets more at home, kicking her feet, looking around the sill. She notices a red clown nose on a string, next to her. We haven’t introduced the nose yet, and it was waiting there for later in class. She looks up, and we make eye contact. She quickly looks back down at the sill, pretending not to notice me. She kicks her feet. I look back towards the bus stop game.

At the next pause in “Bus Stop,” I look up and she has the nose in her hands, moving it back and forth. We make eye contact again. She shares a mischievous smile, and puts the nose down, as if that was her plan all along: pick it up, play with it, put it down. I nod in agreement and look back to “Bus Stop.” The next time I look up I’m eye to eye with a clown in red nose. She smiles
a big smile, knowing that she was discovered. Doing the best I can to not crack up I give her a disapproving head shake and motion to put the nose down. It’s the first time I’ve asked a kid to take off a red nose! She loves this. Now it’s a game. And a great exercise in clown duo relationships: Me playing the Joey, the Straight-clown, the Number 1; Her playing the August, the funny-clown, the Number 2. “Bus Stop” continues, unconcerned.

The second group is from an after-school program with Diyar Theater, some of whom have been working with their teacher for more than two years. They’re incredibly engaged in the workshop and all the exercises, including some astonishingly generous, non-violent, and creative play in the classic game “Bus Stop” (also known as “Park Bench”). What impresses me the most, though, is their clown work. We do a simple exercise that Poki calls “Seeing Seeing,” in which the clown enters, sees the audience, moves into the center, looks each audience member in their eyes, and then exits (saying “Goodbye,” right before they exit). I’ve seen many adults struggle with this exercise because it’s challenging to have all of those eyes on you. These students take it right in stride! They’re engaging and connected, it’s incredibly inspiring. Many of them were at our performance on Monday evening in Bethlehem! 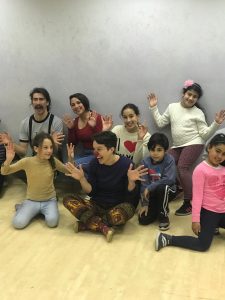 These kids are awesome! They’re attentive, imaginative, physical, and full of play. They took to clowning with ease, openness, and hilarity. Later in the workshop we play a game called “Flocking,” in which we all move around the room as if we’re a flock of birds or a school of fish. Each member of the flock mimics the movements and noises of their neighbors, changing directions and leaders without saying a word. I love this exercise because once the framework is established, we can all play together as equals, unified as one organism moving in the space.