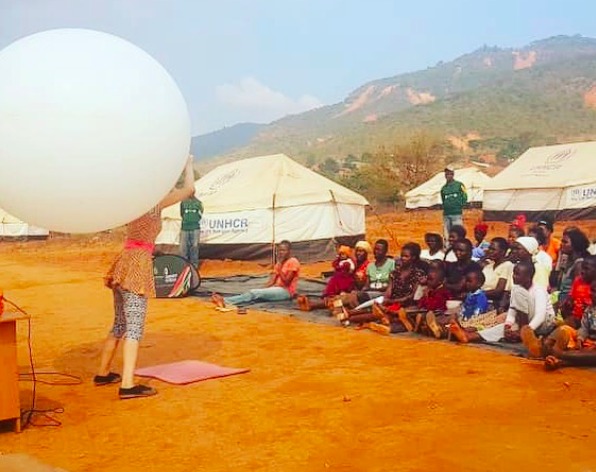 Robin Lara writes about performing in both intimate and colossal spaces, and the need to show up with an open heart no matter what.

Today we’re in Harare, Zimbabwe, performing in a children’s cancer ward. But you’d never know it unless you were told. This is the most intimate show on the tour so far, performed in a patient room that has been cleared of equipment and then filled with 16 kids, their families, and doctors. There would normally be more kids, they said, but the doctors are on strike right now and they had to send a lot of kids home.

We don’t always receive much information about people’s personal situations when we arrive at a performance site. Sometimes we know general things, like they’ve lost their homes in the cyclone, or they’re orphans, or they’re struggling with cancer. But we don’t know their individual backgrounds, or what kind of energy and trauma they’re showing up with that day. So we tread lightly, and focus on play and human connection. What we find is that when we pull people into the world of clown, they’re so full of lightness and joy.

We have our last two shows of the tour today. There are  3,000+ people at the second show, and wowza can they scream. I start each show by warming up the crowd with a bit of balloon magic. They’re very quiet at first, unsure what to think of this rag-tag group of clowns…a thing that doesn’t really exist in Zimbabwe. But when I eat the magic balloon ball, and then fart it out, it’s the first huge audience reaction of the show. It starts us off on exactly the right foot: Kids double over in laughter, moms and teachers shake their heads and laugh at the same time. I’m learning what works here and what’s different.

After a show, people will often say their favorite part is when I juggle on my unicycle, or balance it on my face. But when it’s happening, they barely react at all! One major exception was a show we did at one of the Chimanimani cyclone camps. The audience was mostly comprised of moms, and they started cheering me on right as I was about to juggle. I was so touched that I stopped what I was doing and thanked them. I’m blown away by the connections we’ve made here, and while I’m incredibly grateful for the memories I’ve made on this tour, I’m so sad it’s over!