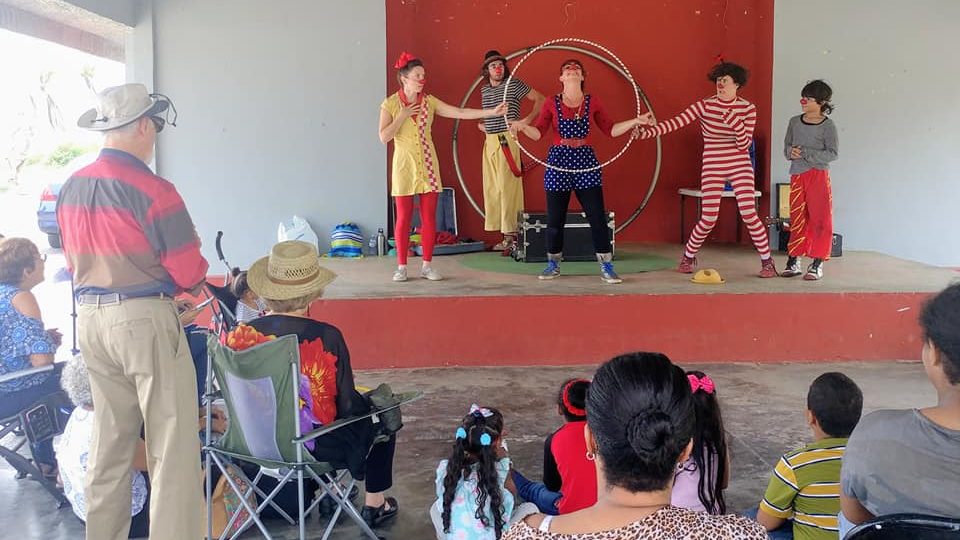 Molly Shannon, who first toured to Puerto Rico in February, 2018, writes a day-by-day diary about her impressions upon returning to the island. During this first week of shows, the clowns travel all over Puerto Rico, visiting preschool- through high school-aged kids, plus a women’s transitional facility.

Even one year after the hurricane, the streetlamps that line the freeway to Yabucoa are still twisted around, lighting the plantain fields instead of the road. Locals tell us that the government attitude is, “Why fix the stuff before the next hurricane season is over.” But things still look the same. It makes you wonder, how long can they keep saying that?

Intersection lights hang crooked and crazy, even in San Juan. Now, the people in Puerto Rico treat intersections with lights as if they have a four-way stop sign. They’re used to it. In San Juan, which has the most reliable power, the lights still go on and off.

The kids understand CWB’s work because of the disaster they lived through. When we talk about where CWB goes, around the world, the kids yell out, “Zonas de desastre, como Maria!”

We perform in a cancha (courtyard) with a river behind it. This cancha was completely underwater during the hurricane, all the way up the hill to the town plaza.

When the high school kids watch us, they’re too cool. That is, until an amazing guy volunteers to be the lion in our show and wows us with his acrobatics. Then, they all want to take photos with us and thank us after the show! A couple of students come up to us at the van, and thank us very profusely and sincerely. They tell us how great the show was and how much it means to them that we came to their school.

Arturo tells us that this town is kind of forgotten—it receives little attention and support. It was divided into two towns and the residents lost some of their identity, so it means a lot that we were able to perform here. He says the teacher who gave a speech after the show talked about how it was the best show that has come to the school.

The preschool kids have lots of fun today. Some of the tiniest ones are scared, but not too scared, of the lion. One teacher asks us where we were yesterday. When we tell her Castañer, she says, “Oh good, they really need it there. They had a hard time after the hurricane.”

Humacao looks so much better than when we toured in February. They have electricity back, some of the debris are cleaned up and the palm trees are nowhere near as scraggly! This is where the hurricane first made landfall, and the residents had a very hard time. There was no power for eight months, and they were completely cut off from the world during the first week because there wasn’t any road access.

During the show, the kids are wild! They’re fun and engaged, but still wild. We have a scary moment in the show today, when a super-enthusiastic little girl volunteers to be the lion. She’s really going for it, roaring and trying to get at the crowd, flinging herself through the hoops and trying to jump on the bucket before we finish explaining it. The bucket falls over and so does she, hitting her chin. She starts crying, but fortunately, Arturo and I are right there with her already. Arturo asks her if she’s okay and how she’s doing. Then he asks if she still wants to be the lion. She nods her head and says yes through her tears. Then she gets back up on the bucket and gives a big roar. Pepito puts the tutu on her and sits with her in the audience, where she smiles and laughs through the rest of the show.

At the end, she insists on helping us carry props out to the van, but the teachers have to stop her because she’s not supposed to leave the building. But for a while, she won’t give up our sound table. I notice that she already has a big gash, with stitches, on her forehead—based on the way she flings herself around, we think she must be adventurous!

Another kid remembers the “shaky-hand” act from our February tour, and demonstrates it while he asks if we’ll perform it in our show. We do! 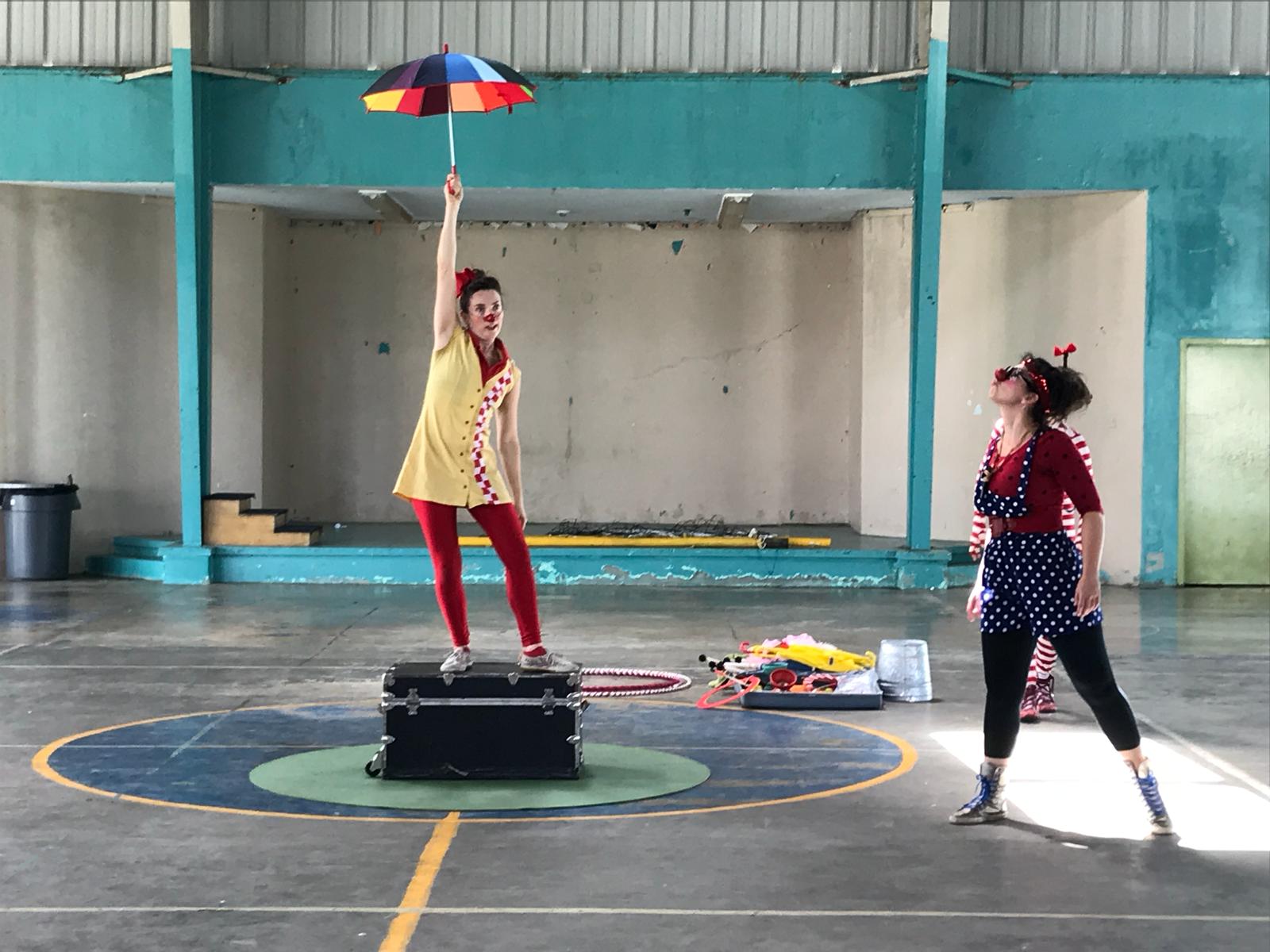 We visited this school last year, and they were pretty wild. Maybe even more wild this year, since they know us and feel comfortable. The social worker pulls me aside after the show and tells me, “It’s really good that you could come to this school and bring these kids some joy. A lot of them have…difficult situations.”

The power goes out in the school after we finish our performance. I hear someone say, “Se fue la luz,” a well-worn phrase in Puerto Rico, at this point. Caguas itself is a town full of old, beautiful buildings, many of which are abandoned. Arturo shows us buildings where homeless people are squatting, as well as a squat with artist/gardener types who are running a community garden. The garden is named “Huerto Feliz” (Happy Orchard), and has a sign that reads, “We need: Seeds, tools, help and love.”

This jail is a transitional facility for women who are reentering the workforce and world. It helps with things like jobs and training, though I think people in the facility are still technically in jail. The start time of our show is pushed further and further back, because some of the women are getting their hair straightened. There’s a party to celebrate someone’s reentry, and to celebrate the women passing some kind of certification program. There are cakes and cupcakes that they baked themselves. Arturo knows some of the women because he and his mom offered an art and movement workshop at the program.

The show is very well received. The women are quiet and hesitant at first, but then they get into it, calling things out and playing along. Our volunteer opera singer is a born diva. The cool girls linger in the back, but one of them gets up to do the umbrella dance. It’s a very tight space, and things get a little chaotic, but we make adjustments to fit everyone. Afterward, a lot of people come up and thank us, saying that they really appreciate it. We take photos with each woman.

Today’s show is in the plaza, but we end up moving to the Centro de Bellas Artes down the street, because of rain. It’s fun to see people returning to our Morovis show who we first met in February. A girl I remember from last time comes back with her grandma, who tells me that the granddaughter has become a Carmelita impersonator since February. We talk to Luisito, the kid Arturo is training to perform with him, and who’s a guest star in our show. Luisito lives with his grandpa in a 15-story walkup in San Juan. After Hurricane Maria, when the electricity was out, the elevators didn’t work and his grandpa couldn’t get up and down the stairs. They were stuck in the apartment for weeks. People were doing brigades to bring buckets of water up and down the stairs, helping the elderly to flush their toilets and shower.