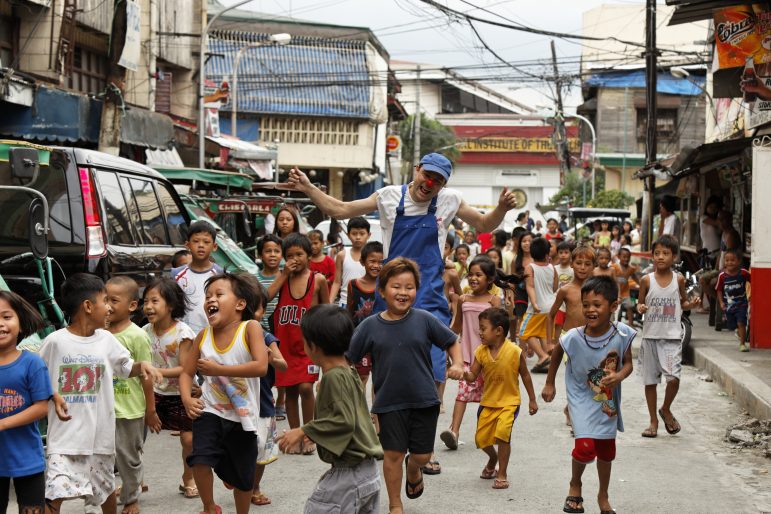 On August 28th, 2011, Hurricane Irene hit my hometown in Vermont. The photographers arrived before the National Guard. As we walked with our neighbors to explore the damage—houses, roads, orchards disappeared by the river—strangers turned the town into a tourist destination. As we collected scattered belongings and organized shelter, social media gaped at the unlikeliness of a hurricane in Vermont.

The improbable circumstances made us a news coverage novelty. Snide comments and insensitivities in the media made a terrible situation worse. People in cities that were spared by Hurricane Irene joked, “What hurricane?” while we waited for the Federal Emergency Management Agency to show up. At best, we received pity. The confusion of being portrayed as a joke and a victim still stings, years later.

Why am I telling you about this experience? Because now, more than ever, it’s important to assess how we talk about and portray people in crisis. During every project, Clowns Without Borders could take pictures of tragedy. We could show you hunger, poverty, violence, or sickness. But instead, we show you laughter, community, and resilience. We want our pictures to demonstrate the connection between people, not the difference in our circumstances.

In October of 2015, our team was on the Greek island of Lesvos when four migrant boats capsized in one night. That evening, the clowns—in their plain clothes—went to the northern harbor of Molyvos to help. Every survivor had lost someone that night. Sabine spent her night in the church-turned-emergency room, translating for the patients and doctors who were having the most difficult time communicating. Luz and Molly distributed dry clothes to the survivors. Clay stayed with two girls who couldn’t find their parents. We helped in the best way we could, and at 12:45 AM, the team left to get some sleep before their morning performance.

Our images from the morning after the wreck include a little boy, damp from the ocean, but laughing as Clay Mazing twirls a lasso around him. A young girl helped the clowns transform a life raft into a trampoline.

Each of these individuals has a harrowing story. Each has a hardship that lies ahead. However, the experiences we offer to you as our supporters are the shared moments of hopefulness. We want to share moments of laughter and joy so that you can feel connection and solidarity instead of pity.

Too often, we are only shown the destruction and never the process of healing. Too often, we see the differences between people instead of the delights we can share in common. Too often, we assume that the subjects of our photos will never view them.

Choose to share the stories with the dignity that you would wish for yourself. Just as I never expected to see the National Guard arrive in Williamsville, Vermont, many of our audience members never dreamed that they would be the ones on the news as survivors.