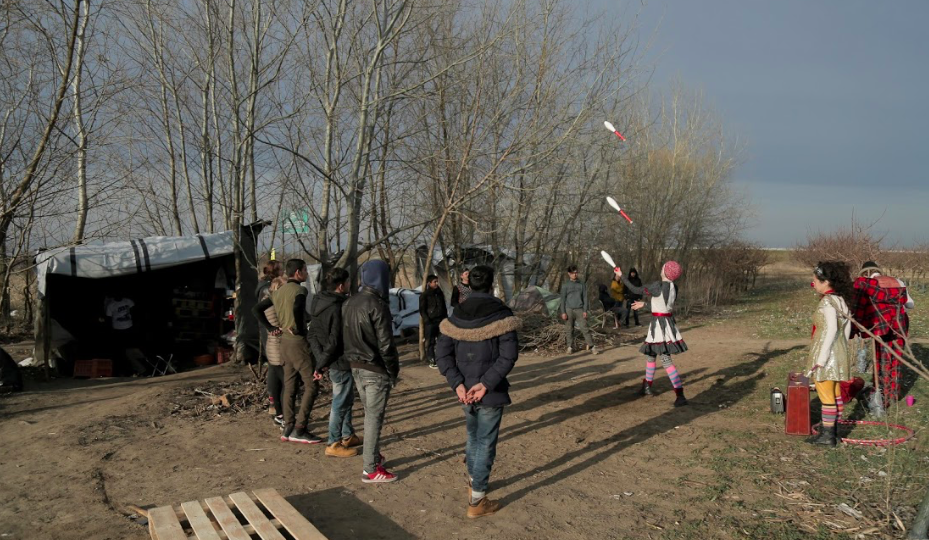 “Crumbling buildings, muddy forests, improvised camp sites—these are the beautiful stages where the clowns shine. Our laughter cuts through the darkness as we do a show illuminated only by headlights. I can see my breath in the air as I pant through my juggling act in the sub-freezing temperatures of Slovenia and Serbia. And after many of our shows, we are filthy, cold and exhausted!”

In March, 2018, CWB – USA returned to the Balkans for the second time in two years. In 2017 CWB partnered with SCI, supported by European Youth Foundation, on a project about amplifying youth stories. Performers listened to members of the refugee communities talk about how forgotten they feel. In 2018 CWB revisited those “transit camps” and communities.

Many refugees are in informal camps, so this tour relied heavily on the street performance and improvisation skills of the  professional artists who volunteer their time for CWB. The team included Sabine Choucair, Justin Therrien and Bekah Smith.

Thousands of refugees walk the Balkan Route, traveling from Greece, through Macedonia, Serbia, and Slovenia, in the hopes of getting refuge in the European Union. Many are still stuck along that route. When people hear the word “refugee,” they often think of temporary displacement. In fact, in 2015, more than half of the world’s refugees lived in protracted refugee situations. Many people along the Balkan Route are stuck—unable to receive asylum in their current nation, unable to move forward across national borders, and unwilling to go back. These people travel alone or with families, sleep in the woods or makeshift camps, and cross the border each night, only to be repulsed by border guards. They flee unspeakable violence in throughout Western Asia and North Africa, and hope to find work and security in the European Union.

Sabine Choucair and the artists of Clown Me In helped make this video to show the tour highlights and impact: