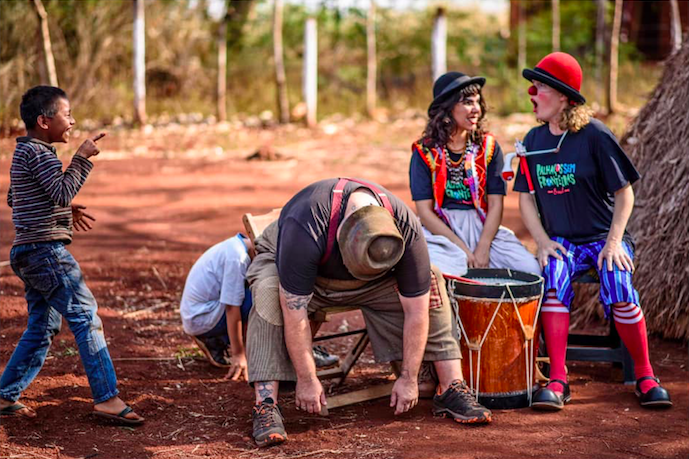 “I feel completely at peace after the show, and the sadness that overwhelmed me earlier has disappeared. I got to experience the transformative power of joy, thanks to the children, my fellow clowns, and the teachers at the school.”

CWB – USA joins Palhaços sem Fronteiras Brasil (PSF-Brazil) to perform for indigenous Guaraní communities in Mato Grosso do Sul, where they are displaced and threatened by loss of lands, deforestation, and export-agriculture. Unfortunately, development programs that benefit Brazil’s economy often result in violence (direct and indirect) against indigenous populations.

CWB partners with a local organization that works to protect the collective rights of Brazil’s indigenous populations.

Indigenous populations in Brazil have been marginalized since Brazil was first colonized, when they were often used for forced labor. Starting in the 1950s, the government created reserves which functioned as enclosures for indigenous people. The confinement of indigenous people expanded agribusiness land use, specifically soy (1970s) and sugarcane (1980s). Today, much of Brazil’s agricultural export is grown on land taken from indigenous people.

In the 1990s, indigenous organizers started the RETOMADAS (resumption, in English), in an effort to leave the reserves and reclaim ancestral land. Demarcating land is an essential practice for defending the rights of indigenous populations. In Mato Grosso do Sul state, where CWB will tour, there is an extremely low demarcation rate. Less than 1.6% of the state’s territory has been fully recognized as indigenous land. In an effort to reclaim their land, many indigenous people have left the reserves and now live in informal camps, often without access to clean water.

In 2016, PSF-Brazil joined Clowns Without Borders International. As the only South American chapter, PSF-Brazil has worked in El Salvador, Mexico, South Sudan, Colombia, Saint Martin, and throughout Brazil.

CWB is delighted to welcome Melissa Aston on her first tour. Melissa has over 20 years of performing experience, including touring with Ringling Brothers and Barnum & Bailey Circus, and working as a therapeutic clown at BC Children’s Hospital.

Ricardo Avellar is a Brazilian juggler specializing in club and contact juggling. He is also a photographer, and will be documenting the tour.

Faeble Kievman first performed with CWB during the Mexico Earthquake tour. He has made humans laugh all over the universe, including the China Wuqiao International Circus Festival, Comedy Exchange Festival, and Cirque du Soleil.

Sorrayla Acosta Parra studied clown at the Ecola Livre de Palhaços in Rio de Jeneiro. She works at the Casulo Cultural Center and as a circus teacher.

Ana Pessoa, the team leader, has worked for PSF-Brazil since 2016. She has performed with PSF in El Salvador and Rio Doce (Brazil). She is an acrobat and accordionist.